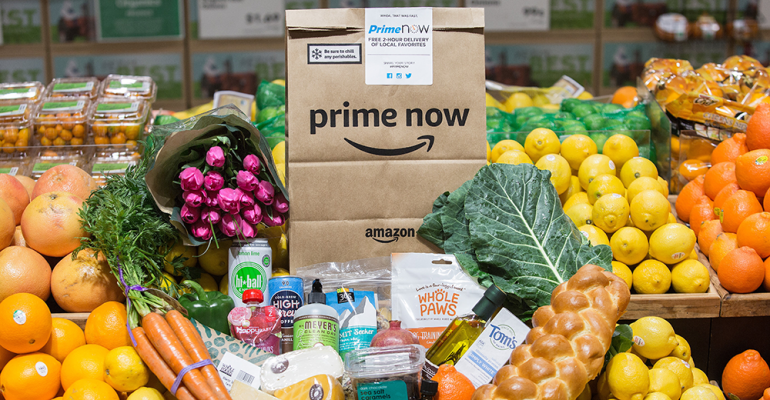 Amazon
Amazon has confirmed that it aims to open a supermarket in Woodland Hills this year. No banner name has been specified.
News>Online Retail

The micro-fulfillment center (MFC) model for online grocery got a boost with reports that Amazon is working with automation specialist Dematic on a robotics-driven warehouse inside a planned new grocery store in Woodland Hills, Calif.

He cited a Medium posting from food/tech blogger Matt Newberg of HNGRY that Amazon has teamed up with Dematic and a report by Bloomberg with photos of a more-than-30,000-square-foot supermarket at 6245 Topanga Canyon Blvd. in Woodland Hills that Amazon is set to open.

“Although Bloomberg’s article last week came across as if Amazon's new grocery store was quite generic, much to our delight, new reports suggest the e-tailer will include an MFC. Reports confirm Amazon is working with Atlanta-based software company Dematic,” Mandeville wrote in his report. “This news falls in line with what we expected of Amazon and is yet another indication that MFC is the superior fulfillment practice versus other forms, chiefly CFC pursued by Kroger with Ocado.”

Newberg’s post said the Dematic MFC would occupy about 7,200 square feet around the perimeter of the Amazon supermarket, or about 21% of the approximately 33,600-square-foot store. His report also showed a floorplan sourced from the City of Los Angeles that indicated the automated facility’s location within the store.

Both Amazon and Dematic declined to comment on reports of the in-store MFC.

“Amazon doesn’t comment on rumors or speculation,” the Seattle-based e-tailer said in an email statement on Friday. In November, the company had confirmed plans to launch a new supermarket in California this year. “Amazon is opening a grocery store in Woodland Hills in 2020,” the company stated.

“As a matter of policy, Dematic does not comment on behalf of our customers without their explicit permission,” a spokesman for Dematic said in a statement emailed on Friday.

Earlier this week, Mandeville released a research note saying that, based on the images and information in the Bloomberg article, the Amazon supermarket in Woodland Hills “lacks excitement/newness” and might not be as big of a threat to major grocery retailers as initially perceived.

“Bloomberg recently reported on Amazon’s first of many planned conventional grocery stores across the country, where images shown looked boringly similar to that of a typical Whole Foods Market,” Mandeville wrote in his Feb. 18 note. The store exhibited no cashierless Amazon Go technology, offered “your typical” center store and meat/seafood service counters, had a “heavy influence” of prepared food and in-store dining, and featured space for online pickup orders, he pointed out.

“Much to our disappointment, though, the images provided no evidence of automation for the picking process,” he added.

However, in his note on Friday, Mandeville explained Amazon’s embrace of automation in the new store means that “grocers need to move with haste” in adopting online grocery fulfillment solutions, with the MFC scheme currently being the best option. The Woodland Hills store is reportedly the first location of a new supermarket chain that Amazon has in the works.

“With this news and upon its confirmation, we believe the grocery industry must move far more quickly to roll out automation practices of its own, as incumbents’ share/margin is Amazon’s opportunity,” he wrote.

MFCs "most feasible and economical" models

In October, Mandeville and his team at Jefferies released a “deep dive” analysis of online grocery fulfillment. Of manual and automated models, they concluded that the MFC is the most feasible and economical.

MFC advantages include speed of deployment, use of existing space and supply-chain assets, faster time to serve (being closer to customers), elimination of 75% of manual picking costs through automation, a “materially lower” delivery cost versus centralized fulfillment, and an estimated one-year time span to begin realizing returns. MFCs are typically sized at about 10,000 square feet or less.

Centralized fulfillment centers (CFCs) offer a higher degree of automation and greater productivity and order capacity, according to the Jefferies study. Because CFCs are bigger facilities, more SKUs are available as well. But the analysis cited significant downsides: CFCs are capital-intensive, can take years to build, are farther away from customers (increasing time to serve) and may cannibalize store sales. Current CFC players include Amazon, Ahold Delhaize and Ocado, the latter teaming with Kroger in the U.S. and Sobeys in Canada.

Last year, Ocado and Kroger unveiled plans to open 20 CFCs in the U.S. over the next three years. So far, Kroger has named locations for six CFCs, which range in size from 335,000 to 375,000 square feet. The first are expected to become operational in 2021. Jefferies’ study, though, said Kroger’s CFC investment could turn out to be “a multiyear mistake,” since the first one won’t open for a couple of years, and the potential returns remain questionable on a total capital commitment of over $1 billion.

Mandeville said in his research note on Friday that, among grocery retailers, Kroger could feel the most impact from a new Amazon supermarket chain, including the Woodland Hills store and other locations. Initial reports of Amazon’s plans for new grocery stores — for which a possible banner name hasn’t emerged from the company — cited potential sites in Los Angeles, San Francisco, Seattle, Chicago, Philadelphia and Washington, D.C.

“For those within the area of this [Woodland Hills] store — or other areas Amazon is thought to have leases already (e.g. Washington D.C., Philly, Chicago) — given our belief that an MFC is capable of servicing roughly a handful of stores, we expect a clustered store-opening approach over time,” Mandeville wrote. “As it relates to the first location, Kroger has the greatest exposure, with 39 stores or 1.4% of its base within a 25-minute drive time.”