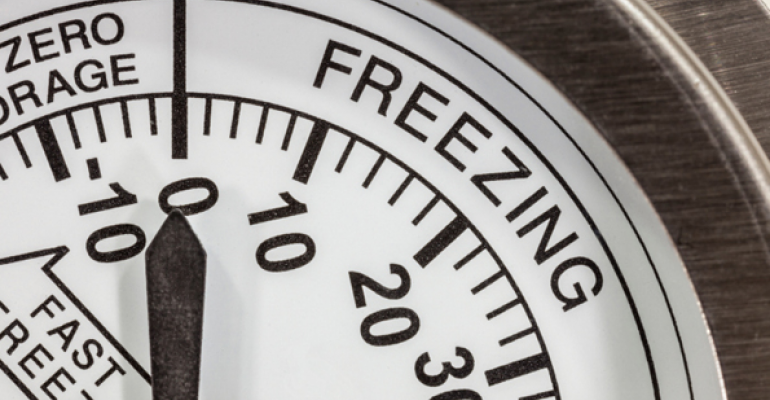 &quot;The install was actually less because the piping is much smaller and it went in a little quicker.&quot; &mdash; Harrison Horning, director of equipment purchasing, maintenance and energy, North Delhaize America Shared Services Group

PHILADELPHIA — Turner — a town of about 6,000 nestled in the foothills of western Maine — may seem like an unlikely place for a revolution in refrigeration technology.

Yet that is the location of a four-month-old store where Hannaford Supermarkets is testing the first supermarket refrigeration system in the U.S. that uses only a natural refrigerant — carbon dioxide — to keep its meat cases cool and its frozen vegetable cases cold.

This transcritical refrigeration system has become one of the most closely watched in the supermarket industry, which is seeking viable alternatives to traditional systems that use environmentally damaging synthetic refrigerants like hydrofluorocarbons (HFCs). The system was also one of the key discussion points at the Refrigeration Roundtable, hosted by SN and ContractingBusiness.com (a sister Penton publication) in Philadelphia in September.

Horning made these comments and others updating the project as a panelist on the Refrigeration Roundtable, where he was joined by Steve Hagen, procurement manager, Sprouts Farmers Market, Phoenix; Paul Burd, manager of refrigeration/engineering, Weis Markets, Sunbury, Pa.; and Brad Morris, manager of engineering, Giant Eagle, Pittsburgh.

Transcritical refrigeration systems, which operate best in moderate-to-colder climates, had heretofore been used mostly in European countries, Japan and Canada, but not in the U.S. By incorporating only CO2, transcritical systems dramatically reduce the cost and global warming impact of refrigerant leaks, compared to that of conventional systems that use HFCs —and hydrochlorofluorocarbons (HCFCs), like the widely used R-22, which also damages the ozone layer). HFCs and HCFCs have a global warming potential (GWP) hundreds to thousands of times that of CO2.

Hannaford’s decision to test a transcritical system stems from the participation of its parent company, Delhaize Group, Brussels, in the Consumer Goods Forum, Paris, an association of global retailers and manufacturers. In late 2010, CGF passed a resolution that by 2015 its member companies would start phasing out HFC refrigerants because of their large contribution to climate change. “We felt we had to do something,” said Horning. “So [in 2011] we decided to do a pilot project.”

Hannaford initially considered an alternative natural-refrigerant system using ammonia and carbon dioxide that is being tested at an Albertsons store in Carpinteria, Calif.

“We found that that would cost more money up front, and rather than try to prove that, which could work in any climate, we decided to prove transcritical which would work in our climate.”

Hannaford plans to wait six to 12 months before deciding whether to install another transcritical system, said Horning.

Carnot Refrigeration worked with Hannaford over a six-month period to “prove the feasibility and develop the design” for the system” before Hannaford purchased it, Horning said. The supplier also helped the chain train its in-house technicians on the new technology. Hannaford continues to study whether the chain will have sufficient staffing to work on the system, he added.

Horning acknowledged that the “first cost” of the transcritical system — the cost of the system itself — is higher than that of the refrigeration systems Hannaford typically uses.

But the cost difference was less for Hannaford because its standard system was already more sophisticated than a conventional direct expansion (DX) refrigeration system.

“We need to be looking at different ways for that premium to come down,” said Horning.

Possible sources of savings include energy efficiency, cheaper refrigerant and not having to convert to a new refrigerant for environmental or regulatory reasons, he noted. Currently, it’s too early to draw any conclusions from energy data at the store, though the first energy bill “looked like it was somewhere in the ballpark of an existing conventional store.”

Though refrigerant leaks from a transcritical system don’t impact the environment, Hannaford still wants to keep leaks to a minimum to save money. Horning does not yet have a definitive read on the leak tendencies of the Turner store’s system.

“At some point, any system is going to leak and you can’t afford to get [leaks] to zero, so we’ll have to wait and see how that plays out,” he said. “I don’t know where we’ll find most of the leaks, but I think the cases ... are the places we’re going to have to keep an eye on.”

Another consideration is that transcritical systems sometimes operate under higher pressures than conventional systems — up to 1,300 pounds per square inch (psi). “The system needs to be designed with pressure relief valves in places where it’s possible to trap CO2,” said Horning. “So worst case, you vent out through a pressure relief valve before you burst a pipe, but you don’t want to be doing that all the time, either. So there’s lots to learn about the system.”

An additional challenge for Hannaford has been locating spare parts for the transcritical system. “We know where we can get a spare compressor, gas cooler fan, high pressure valve, etc.,” Horning said. “But for the little parts — gaskets, fittings, etc. — we have an on-site kit. If a part gets used, we have the technician take a photo, and then we can send that up to Canada and they can see what’s missing, and mail us whatever we need. So I think we have a system in place to manage the parts for now.”

Food retailers are removing the ozone-depleting R-22 refrigerant from their store systems via remodels and retrofits, in advance of 2020 when R-22 will no longer be produced or imported.

Many of these retailers — including the four represented at the Refrigeration Roundtable — are replacing R-22 with R-407A, which has a global warming potential of 2,107; that’s high but much lower than that of other HFC refrigerants.

The old R-22 that is being removed from stores still has value as a service refrigerant for stores still using R-22. But how are retailers storing and managing their used R-22?

Weis Markets, Sunbury, Pa., stores its R-22 at one of its warehouse facilities, said Paul Burd, manager of refrigeration/engineering for Weis. “We audit that and re-weigh that every quarter for our refrigerant management software.”

In September, Weis converted its last R-22 store, using R-407A as a replacement, he said.

Sprouts Farmers Market, Phoenix, also employs a refrigerant management program to oversee its used R-22, noted Steve Hagen, procurement manager for Sprouts. The R-22 is stored in various regions “where the stores are that have R-22,” he added.

Giant Eagle, Pittsburgh, has its R-22 cleaned and stored through United Refrigeration for a monthly fee, said Brad Morris, manager of engineering for the chain. A monthly statement accounting for the refrigerant is sent to Giant Eagle, which also keeps a refrigerant log, “almost like a checking book log, with debit and removal,” noted Morris.

Refrigeration contractors are also involved in the management of used refrigerant. For example, Wright Brothers, Griffin, Ga., tracks the R-22 it removes from stores for its retail clients. “We do keep an emergency supply of refrigerant in our shop,” said Steve Wright, president, Wright Brothers, who participated in the roundtable. “Our customers keep a minimum amount of refrigerant stored on-site, that’s used there. Refrigerant is stored in the motor room, or the equipment room, or some secure area at store.”

In addition, excess refrigerant is sent to a certified refrigerant recovery company, which will “either buy it back or destroy it,” said Wright.