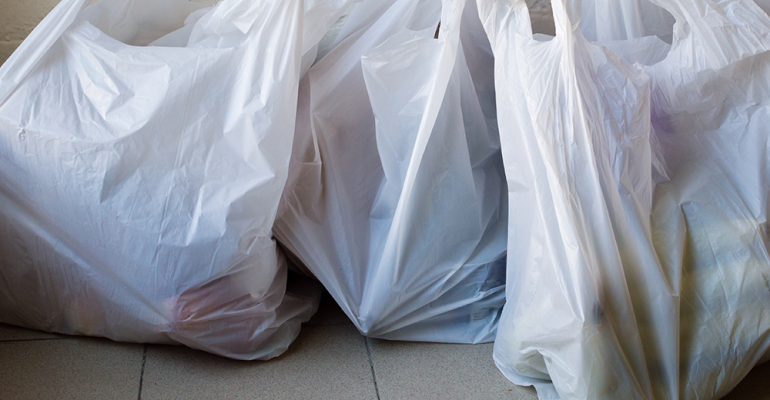 Law would go into effect for retailers in March 2020

New York passed a statewide ban on single-use plastic bags over the weekend, a long-expected move that Gov. Andrew Cuomo and the state legislature included as part of a spending plan for the 2019-2020 state fiscal year.

In the agreement, reached earlier last week but not officially announced until Sunday, most single-use plastic bags provided by supermarkets and other stores will be banned statewide starting March 1, 2020. The ban will require residents to pay for paper bags or reuse their own on grocery store visits. Individual counties in New York will have the option of charging 5 cents for paper bags, with 40% of the revenue supporting local programs to buy reusable bags for low- and fixed-income consumers, and 60% of the revenue supporting programs in the state's Environmental Protection Fund.

New York would follow California and Hawaii as the third state to have a statewide ban. California passed its ban in 2016, while all of Hawaii’s counties now ban the bags although it’s not a state-mandated law there.

The new law also follows a trend among retailers who have been proactively eliminating or setting target dates to eliminate the single-use bags nationwide. Last summer Kroger announced plans to eliminate plastic shopping bags from its more than 2,800 company-owned supermarkets by 2025. The supermarket giant was distributing 6 billion single-use bags per year.

And Denver-based Natural Grocers stores announced today that it had eliminated more than 300 million single-use plastic bags and donated $1 million to local food banks since launching its program on Earth Day in 2009. The 152-store chain eliminated single-use plastic bags from checkout lanes and donates 5 cents to local food banks every time a customer shops with a reusable bag.

“The impact of eliminating single-use bags from our stores is enormous,” said Natural Grocers Co-President Kemper Isely. “As a business, the ripple effect of our choices can redefine the future. Ten years ago, we chose to ditch single-use bags during checkout. We thank our customers for supporting this important initiative over the past decade and for making the decision to shop with reusable bags.”

And in New York, smaller operators like New York-based DeCicco & Sons have gotten ahead of the state ban, eliminating the bags in its seven Hudson Valley stores last fall. The supermarket chain used 22 million plastic bags in 2017 and, according to Vice President Christopher DeCicco, “that won’t happen again in 2019. We took a look at our operations, and identified that this was the single most positive environmental change that we could make. ”

While environmental campaigns against plastic bags are not new — Whole Foods has created a cottage industry with its ubiquitous reusable canvas shopping bags, while socially conscious retailers like PCC Community Markets have been plastic bag-free for years — the latest move by New York puts the issue on a much larger stage and increases pressure on both communities and retailers across the United States to eliminate the bags. Washington state recently put forth a bill that could make it the next state to enact a ban.

Still, not all retailers and industry parties are fully on board. The New York State Food Industry Alliance, which represents grocers, says the plastic-bag ban will increase retailers’ costs, which means consumers will pay more.

The cost of shipping paper bags, for example, is more than shipping plastic bags because paper takes up much more room, according to Mike Durant, the group's president and CEO.