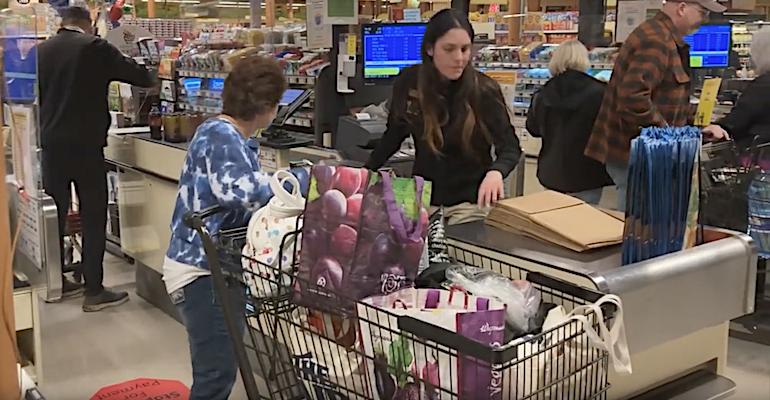 Wegmans
Currently, Wegmans has phased out disposable plastic grocery bags at 61 of its 106 stores, with nine New Jersey stores slated to do so early next month.
Issues & Trends>Sustainability

Wegmans Food Markets plans to phase out single-use plastic bags companywide by the end of 2022.

With the move, Rochester, N.Y.-based Wegmans said it aims to shift all customers to reusable shopping bags, which it described as “the best option to solve the environmental challenge of single-use grocery bags.” Currently, the supermarket chain has eliminated the plastic bags in 61 of its 106 stores, including all New York locations plus selected stores in Virginia, Massachusetts and Maryland.

Wegmans added that it’s slated to transition out of single-use plastic and paper bags at all nine of its New Jersey stores on May 4, in line with the state’s bag ban.

“We understand shoppers are accustomed to receiving plastic bags at checkout and losing that option requires a significant change. We are here to help our customers with this transition as we focus on doing what’s right for the environment,” Jason Wadsworth, category merchant for packaging, energy and sustainability at Wegmans, said in a statement. “As we’ve encountered plastic bag legislation in numerous markets, we’ve learned there’s more we can do, and a bigger impact we can make, together with our customers.”

Wegmans noted that it will take a phased approach to removing single-use plastic bags at its remaining 45 stores throughout the second half of 2022 to accommodate the supply of paper and reusable bags. The chain said all new stores will open with paper bags as the only single-use bag option.

To spur the use of reusable shopping bags, Wegmans will charge five cents per paper bag, an approach that the company said worked New York and other markets. In stores where the company has already stopping using plastic bags, paper bags are used for 20% to 25% of transactions on average, with the remaining 75% to 80% of transactions using reusable bags or no bag at all.

The elimination of plastic bags from the remaining Wegmans stores and shift to reusable bags will prevent about 345,000,000 single-use bags from going into circulation over the course of a year, the regional grocer said. The amount collected from the bag charge will be donated to each store’s local food bank and United Way. In 2021, Wegmans collected and donated more than $1.7 million from the bag fee.

Wegmans has taken a proactive approach as retailers nationwide eschew single-use shopping bags. In 2019, the grocery chain — ahead of an impending plastic bag ban in  New York state — piloted the removal of plastic bags at its stores in Ithaca and Corning, N.Y., as well as in Richmond, Va., stores. Wegmans said the New York pilot was designed to gauge impact of eliminating plastic bags, ease the transition for shoppers and associates, and encourage customers to adopt reusable bags, whereas the Richmond pilot focused on helping customers make the switch when legislation wasn’t the driving factor. In New York, Wegmans ended up eliminating plastic bags at all of its New York stores in January 2020, before the state’s ban took effect that March.

The phaseout of plastic shopping bags is part of Wegmans’ effort scale back the use of single-use plastics. The company said it aims to reduce its in-store plastic packaging made from fossil fuels, along with other single-use plastics, by 10 million pounds by 2024. Overall, Wegmans operates stores in New York, Pennsylvania, New Jersey, Virginia, Maryland, Massachusetts, and North Carolina.