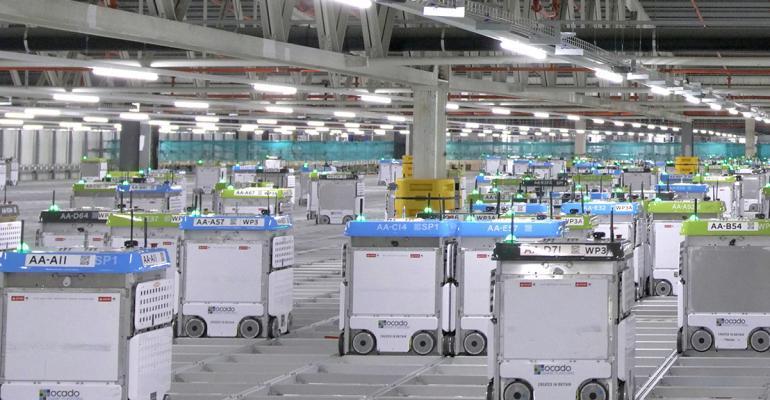 Kroger
The 200,000-square-foot Ocado CFC in Phoenix is expected to be up and running two years after groundbreaking, Kroger said.
News>Technology

The Kroger Co. has identified Phoenix as a location for an upcoming Ocado automated customer fulfillment center (CFC) to process online grocery orders.

In November, Kroger announced plans to build a 200,000-square-foot Ocado CFC in the Southwest region. The Cincinnati-based grocer reported late Friday that Phoenix will be the site of the upcoming facility. Construction is slated to start this year, and the warehouse is expected to become operational 24 months after the groundbreaking.

“Kroger continues to accelerate the expansion of our national network to redefine the customer experience,” Gabriel Arreaga, chief supply chain officer at Kroger, said in a statement. “Our partnership with Ocado is and will continue to be rooted in our ability to deliver a value-added customer-centric solution that brings fresh food to customers through our seamless ecosystem.”

“This exciting new collaboration will create hundreds of new jobs in Arizona,” stated Arizona Gov. Doug Ducey. “Arizona is proud to be one of the first sites in the country to launch this innovative technology. We thank Kroger and Ocado for their investment in our state.”

In total, Kroger has announced 10 CFCs. Most recently, in late September, the company named Romulus, Mich., as a CFC site, one of three new Ocado facilities that had been announced for the Great Lakes, Pacific Northwest and West. Thus far, Kroger hasn’t identified the locations of the other two sites.

“With Kroger, we are developing a game-changing ecosystem for serving online grocery to customers across the United States. This includes Ocado’s automated CFCs across a range of sizes, as well as software to optimize fulfillment in stores for curbside pickup,” according to Luke Jensen, CEO of Ocado Solutions, which has its U.S. headquarters in Tyson, Va. “Powered by Ocado’s state-of-the-art, proprietary technologies, this site will be crucial in bringing unrivaled online grocery experiences to homes across Arizona and wider geographies.”

Kroger and United Kingdom-based Ocado unveiled their partnership in May 2018, saying at the time that they plan to open 20s CFCs in the United States over the next three years. The Ocado CFCs use automation and artificial intelligence to service online grocery orders, and the facilities are expected to expand Kroger’s products to a larger geographic footprint.

“Phoenix is a global center of innovation with the experienced workforce and tech ecosystem that makes it a perfect location for Kroger’s customer fulfillment center,” commented Phoenix Mayor Kate Gallego. “We are excited to see the potential of an estimated 700 jobs within its first five years of operation. These jobs include but are not limited to transportation, warehousing, robotics and technology, which are four of Phoenix’s workforce strengths. The location also takes advantage of our city’s burgeoning, advanced transportation network. Kroger has long been a major part of the Phoenix economy, and this new expansion is a highly welcomed addition.”