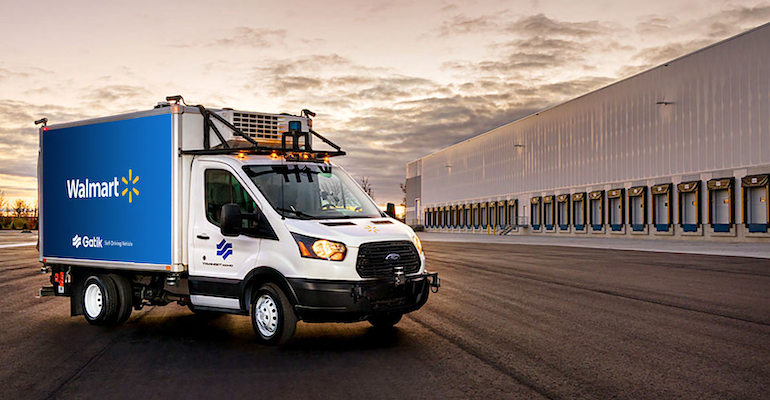 Walmart
In the next phase of the pilot, expanding from Arkansas to Louisiana, Walmart will use Gatik's latest Autonomous Box Trucks.
News>Technology

Building on an earlier test, Walmart next year plans to go fully driverless in an autonomous vehicle pilot in Arkansas as well as bring the middle-mile delivery technology to Louisiana.

Tom Ward, senior vice president of customer product at Walmart U.S., said in a blog post Tuesday that Walmart’s pilot of self-driving vans from Palo Alto, Calif.-based Gatik, launched in July 2019, will drop the safety driver and go solo on a two-mile route between a “dark” Supercenter in Rogers, Ark., and a Neighborhood Market in Bentonville, Ark.

“Now, we’re taking the next step forward: Gatik’s multi-temperature Autonomous Box Trucks will operate this route driverless in the state of Arkansas. This achievement marks a new milestone that signifies the first-ever driverless operation carried out on the supply-chain middle mile for both Gatik and Walmart,” he explained. “When we begin incorporating driverless Box Trucks into the Bentonville operation next year, the pilot will continue as it always has. But now, we’ll be working with Gatik to monitor and gather new data to help us stay on the leading edge of driverless autonomous vehicles.” 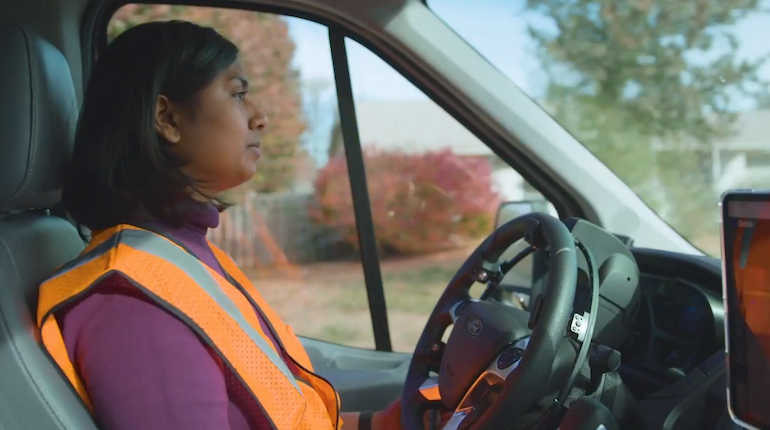 Backup drivers rode along in the Gatik vehicles during the initial Walmart pilot in Arkansas.

Also in 2021, Walmart aims to test a different application of the Gatik Autonomous Box Trucks in another location and on a larger scale. Plans call for the retailer to pilot the self-driving vans, initially with a safety driver, on a 20-mile route between a Supercenter in New Orleans to a Walmart pickup point in Metairie, La., where customers can collect their orders.

“This unlocks the opportunity for customers who live further away from our store in New Orleans to benefit from the convenience and ease of Walmart’s pickup service,” Ward said. “With 90% of Americans living within 10 miles of a Walmart, a closer store isn’t always the answer. Perhaps it’s just a pickup location, with an autonomous vehicle making deliveries on a constant loop. Our trials with Gatik are just two of many use cases we’re testing with autonomous vehicles, and we’re excited to continue learning how we might incorporate them in a delivery ecosystem.”

Though the test with Gatik focuses on middle-mile logistics, Bentonville-based Walmart has engaged in a number of tests of autonomous vehicles for delivery of online orders of groceries and other items.

Last month, Walmart said it plans to pilot all-electric delivery vehicles with self-driving car company Cruise in Scottsdale, Ariz. And last December, the retail giant unveiled a pilot of Nuro unmanned vehicles for grocery delivery in Houston. That followed a February 2019 announcement by FedEx of a partnership with Walmart, Target and Walgreens to test last-mile delivery of small-shipment online orders via the FedEx SameDay Bot, a wheeled, shoulder-high delivery robot.