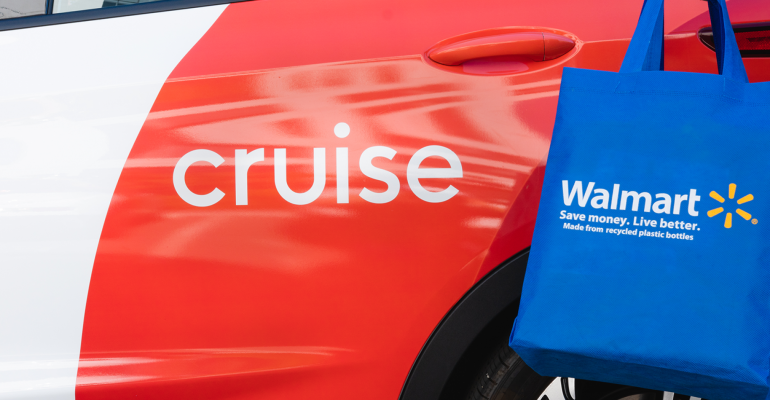 Walmart
Beginning this year, Walmart will launch a pilot in Scottsdale, Ariz., with Cruise to operate an entire fleet of all-electric delivery vehicles powered with 100% renewable energy.
News>Technology

Following on a pilot project with Cruise electric autonomous vehicles for last-mile delivery, Walmart announced Thursday morning that it is investing in the company as part of a new $2.75 billion funding round.

The companies did not release the amount of Walmart’s investment. The new funding brings Cruise’s total valuation to more than $30 billion, according to a report from CNBC. San Francisco-based Cruise is a majority-owned subsidiary of General Motors.

“This investment is a marker for us — it shows our commitment to bringing the benefit of self-driving cars to our customers and business,” said John Furner, president and CEO, Walmart U.S., in a blog post. “We’re excited to join Cruise’s already impressive partner and investor ecosystem with the likes of GM, Honda and Microsoft as we work toward pioneering this emerging technology.”

Walmart’s investment follows the retailer’s work with Cruise announced in November 2020 to develop a delivery pilot in Scottsdale, Ariz., and will aid in Walmart’s work to develop a last mile delivery ecosystem that’s fast, low-cost and scalable.

He continued, “As delivery has become a staple in our customers’ lives, we’re focused on growing our last-mile ecosystem in a way that’s beneficial for everyone — customers, business and the planet. With their all-electric fleet powered by 100% renewable energy, Cruise is a natural partner as we work to take collective action on climate change.”

Beginning this year, Walmart will launch a pilot in Scottsdale, Ariz., with Cruise to operate an entire fleet of all-electric delivery vehicles powered with 100% renewable energy. The project will support the retail giant’s initiative to reach zero emissions by 2040.

As part of the pilot, customers will place orders from their local Walmart stores and have them delivered, contact-free, via one of Cruise’s all-electric self-driving cars.

“Technology that has the potential to not only save customers time and money but also is helpful to the planet is technology we want to learn more about,” said Tom Ward, senior vice president of customer product, Walmart U.S., in announcing the pilot in November.

While the work with Cruise is focused on renewable energy, it is not Walmart’s first foray into self-driving delivery vehicles. The retailer has also tested the unmanned Nuro R2 delivery vehicle — which only hauls products and has no onboard driver or passengers — in Houston, as well as autonomous Toyota Priuses to bring Walmart online grocery orders to customers’ homes. Both vehicles are powered by Nuro’s self-driving software and hardware.

In July 2019, Walmart announced it was working with Gatik on a “middle-mile” logistics pilot using the tech startup’s self-driving Ford Transit Connect vans to help move goods from the Walmart Supercenter in Rogers, Ark., to a Walmart Neighborhood Market in nearby Bentonville.

More recently, the company has been testing unmanned drone grocery delivery in North Carolina, with Flytrex.

“Over the years we’ve been doing a lot to learn more about the role autonomous vehicles can play in retail,” said Furner, “and we’ve seen enough to know it’s no longer a question of if they’ll be scaled, but when.”