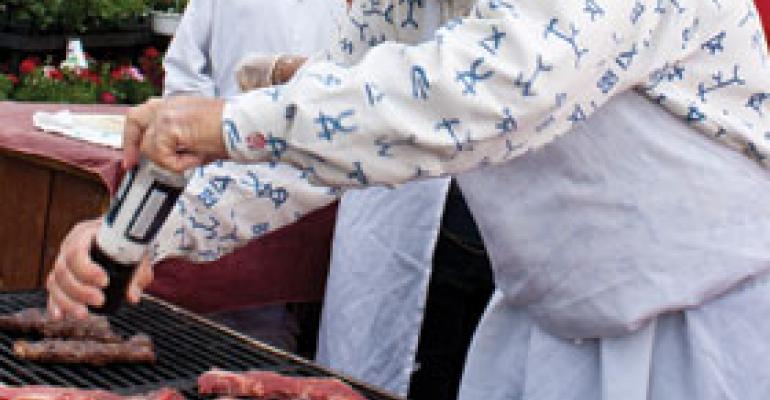 Meat raised without artificial hormones or antibiotics, sometimes called all natural, can create a valuable point of difference, but it takes a lot of time and work communicating with shoppers, supermarket retailers told SN. What counts most, they said, is partnering with producers that can guarantee a consistent supply, and then explaining to shoppers what means that no artificial hormones or antibiotics

Meat raised without artificial hormones or antibiotics, sometimes called “all natural,” can create a valuable point of difference, but it takes a lot of time and work communicating with shoppers, supermarket retailers told SN.

What counts most, they said, is partnering with producers that can guarantee a consistent supply, and then explaining to shoppers what “natural” means — that no artificial hormones or antibiotics were used in the production of a brand line, for example. Stew Leonard's, the iconic, family-owned independent based in Norwalk, Conn., is a case in point.

“We've had 15% growth in that category [no antibiotics ever, and no artificial hormones] over the last few years. It's been steadily growing,” said Stew Leonard Jr., president and chief executive officer of the four-unit company.

“Even in the last year, we've had good growth with that, and if you want an extra sales punch just buy those produces from a local farm.”

Local and “Naked,” as Stew Leonard's no antibiotics, no hormones fresh meat is called, is a winning combo, Leonard said. However, this trend hasn't translated to an uptick in demand for organic beef, he added.

“There's really no growth there. I think it's because of the price, and customers are getting what they want with our Naked beef, and pork, and chicken. That they have no [artificial] hormones and no antibiotics is what is important to them, and we retail those products for only about a dollar a pound more,” than their commodity counterparts.

Other retailers said grass-fed beef is less accepted by customers because it does not give them the eating experience they expect. The texture and flavor is different — “beefier” as one retailer described it — compared to corn-finished beef.

“We get an occasional request for grass-fed beef, but I've found we don't get many repeat sales,” said John Gerlach, meat buyer/supervisor, for three-unit Stauffers of Kissel Hill, Lititz, Pa.

“What I honestly think is they just don't like it as much. They've been told, maybe by their doctor, to try grass-fed beef because it is much, much leaner, and they do try it, but realize they don't get the same eating experience as they're used to.”

Gerlach pointed out that it can be difficult to produce grass-fed beef that has a consistent flavor.

“I carry a limited selection of organic, grass-fed grinds and steaks, and for the holidays, I'll have some rib roasts, but of our entire beef business, it only makes up two or three percent of sales, and it's not growing. There are the customers who want it, and they're steady, but it's not a growth category, not for us.”

Like other retailers, Gerlach said that all-natural, antibiotic- and artificial hormone-free beef, pork and chicken still make up only a small part of their meat department's business, but he said that it's a niche that's here to stay.

Meanwhile, some small independents, who have been working with suppliers for years, have lined their meat cases exclusively with product that they can confidently market as never having had artificial antibiotics or growth hormones administered. Dorothy Lane Market, Dayton, Ohio, and Kowalski's Markets, St. Paul, Minn., stand out among them.

Other retailers are struggling with different categories, trying to determine what their customers want.

United Supermarkets, Lubbock, Texas, right now is in the midst of implementing a new strategy, or more aptly, going back to an old strategy that worked in its upscale Market Street format stores.

“In general, across all categories, I'm seeing all-natural — meaning no hormones and no antibiotics — versions growing in sales,” said Scott Nettles, director of meat and seafood for 50-unit United Supermarkets.

“But I tried something in our Market Street stores' meat departments that didn't work, and now I'm going back to what we were doing before.”

Nettles previously had a Certified Angus Beef program that was all-natural, as well as a line of imported organic, grass-fed beef from Uruguay, combined with a select program, and a private-label Choice program. Neither of the latter two were all-natural.

“To try to simplify our buying, I moved to a Texas Select Beef program, a CAB branded choice program and a grass-fed organic program. I thought I could transition customers from the natural program I had had to the grass-fed organic. But, sales dropped off quickly,” Nettles said. “I think our customers who had been buying CAB natural beef migrated somewhere else, because they clearly wanted the natural Certified Angus Beef. We had so much shrink [in the organic, grass-fed subcategory], it constituted a net loss for us.”

Nettles said he did retain some customers for the organic beef, but he had to take measures to minimize shrink. Therefore, he's buying most of it in vacuum skin packs to provide a longer shelf life. “Only at two or three of our stores are we cutting that organic meat fresh,” he said.

He's also looking to bring back all the variety he had carried previously in the no-hormones, no-antibiotics beef program. That includes mostly top sirloin, strip steaks, rib eyes, and filet mignon and a 90% lean grind.

“I'll also bring in a couple of roasts, rump and something else, for the winter,” Nettles said. “Above all, I think customers want a good eating experience.”

Nettles expects to see the growth in no antibiotics, no artificial hormones beef to continue at Market Street stores, and in general.

Unlike some other retailers, Kowalski's Markets can count grass-fed beef as a best seller in its selection of natural beef. “I think our efforts to educate our customers about all the categories have made our meat a destination department. It definitely sets us apart from the competition,” said Terri Bennis, Kowalski's vice president of fresh food operations, in an earlier interview.

For the past five years, the company has made an effort to make the fresh meat case nearly 100% all-natural. Bennis and other retailers emphasized the importance of educating customers about the different meanings, for instance, of “natural.”

According to current U.S. Department of Agriculture regulations, “all natural” can simply mean that no additives or preservatives were incorporated after slaughter, and the resulting product was minimally processed. Therefore, retailers know they must emphasize that their “no artificial antibiotics, no hormones” fresh meat is indeed that.

Nettles at United Supermarkets said he makes good use of signage, and has cling decals on the front of the meat cases. Gerlach at Stauffers of Kissel Hill uses on-pack stickers calling out “no antibiotics, no hormones.” The stickers are colorful. They need to stand out in the case, because the no antibiotics, no artificial hormones products are integrated with commodity counterparts in many cases.

“We tried having the all-natural meats together in one section, but when we segregated them like that, it killed them [sales of the all-natural beef, pork and poultry],” he said.

At Stew Leonard's, where 15% to 20% of the company's fresh meat offerings have had no hormones or antibiotics ever, customers know what all the signs that say “Naked…” mean. Stew Leonard Jr. coined the word Naked to designate such products.

He told SN that he was inspired by “The Naked Cowboy,” a performer who goes into Manhattan's Times Square nearly every day with his guitar. Tourists have dubbed him The Naked Cowboy because he's clad only in his underwear and a cowboy hat. Leonard hired the regionally famous performer to sing a song about Stew Leonard's, and the resulting ad is now played in-store when the company is promoting its Naked Beef, Naked Pork, Naked Poultry, and more recently, Naked Salmon.

Over the last five years, Leonard has worked closely with ranchers to supply the line's beef. Right now, he's working with six different ranchers in the West from whom he buys direct.

The retailers SN spoke to all indicated that “all natural” shoppers are most concerned about the use of artificial hormones and antibiotics in commodity products.

So, retailers see a bright future ahead for this subcategory. Even though sales have grown slowly, they've kept on climbing even through the worst of the recession, retailers said.

The latest National Meat Case Study, a report compiled once every three years by Sealed Air's Cryovac brand, the Beef Checkoff Program and the National Pork Board, underscores those comments. The study showed that 32% of packages in meat cases in 2010 carried “natural” claims, up 3% from 2007. That figure, however, lumped together products that only met the USDA's minimally processed “all natural” definition and products that were raised without added hormones or antibiotics.

The same study showed that only 0.9% of packages in the meat case carried the USDA Certified Organic seal. The study summary, however, indicated that the percentage was up slightly from previous years. Current figures gathered nationally by the National Cattlemen's Beef Association via the Beef Check-Off program, and figures from The Perishables Group, a Chicago-based fresh food consulting firm, in some cases, run counter to what retailers quoted here have experienced. The NCBA and Perishables Group figures may, however, throw light on a broader picture of where consumers' demand for naturally raised, and organically raised beef and other fresh meat is headed.

The natural / organic beef category experienced a significant decline — down 12.5% — in the third quarter of this year, compared to the same period a year ago, NCBA spokeswoman Meghan Pusey pointed out.

This dramatic swing is partly the result of the subcategory's relatively small size. According to FreshLook Marketing Data sourced by NCBA, retail sales of natural and organic beef represented just 2.5% of total beef volume, and 3.9% of total dollar sales of beef sold in the U.S. during the 13 weeks ending September 25, 2011.

Meanwhile, research from The Perishables Group indicates that during the 52 weeks ending September 25, volume sales for the total organic meat and poultry category rose 10.3%. Growth of organic chicken most likely made up the difference. The same set of figures shows that volume sales in the generic “natural” meat and poultry subcategory are down 1.5%, while sales of meat labeled “antibiotic free” are down 3.7%, with declines driven largely by higher pricing.

However, NCBA research shows that consumers maintain an interest in beef raised naturally even if that interest isn't currently translating into sales.

The percentage of consumers showing concern about the use of artificial hormones and antibiotics in beef has increased, at least by single digits, every year since 2007, a July 2011 Beef Check-Off study shows.

Variety and convenience liven up the meat case
Nov 04, 2020