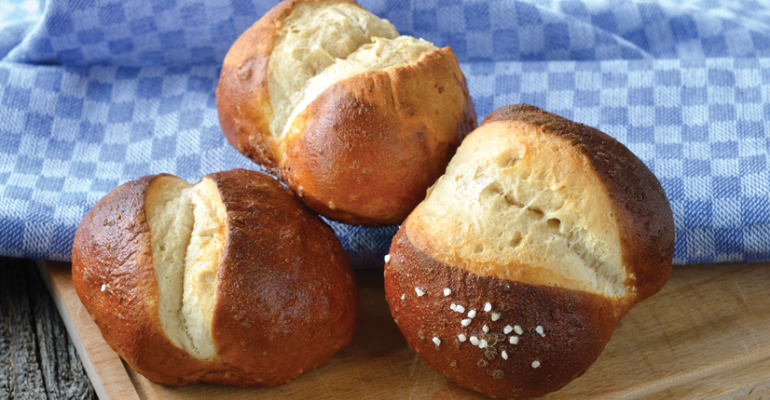 Pretzel Rolls Are on a Roll

Thanks to restaurant marketing pretzel rolls are hot, and total roll sales are rising significantly

Total in-store bakery sales increased 8.3% from 2011 to 2013, according to a report just released by Mintel, a Chicago-based market research company, and other research indicates rolls played a big part.

Sales of all kinds of rolls — dinner-type to a growing variety of hard rolls, including some hybrids — jumped 5% last spring over the same period a year earlier, and varieties in the category climbed 8%, a Nielsen Perishables Group specialist told SN in an earlier interview. Those figures are borne out at supermarkets across the country.

“We accomplished that with enhanced variety, additional SKUs and an aggressive merchandising program we put in place early this year. The variety of rolls we offer is up about 20% from this time last year, and we’re merchandising rolls in several places in the store — as we put in soup bars at remodels, at our salad bars, in the grab-and-go cases.”

Not one to fall behind national trends, the 15-unit, upscale chain quickly jumped on the pretzel roll bandwagon in 2012. As national quick-service food chains broadcast that their burgers, their hot dogs and their sandwiches were served on pretzel rolls, Bristol Farms started turning out its own pretzel rolls and other pretzel items.

“That took off and hasn’t looked back. We’re diving headfirst into the pretzel craze,” Poling said.

Other chains, too, have started offering their own, spurred by pretzel roll popularity in restaurants. Some said they were wooed by television ads that so frequently flash piled-high, luscious-looking sandwiches on pretzel rolls.

“We’ve had pretzel sticks in our bakeries, but in late Q4, we’ll add pretzel rolls as well.”

“And this past month, we added pretzel sub rolls and little pretzel bites,” Wullenweber said.

By now, the bakeries at both units of Jungle Jim’s — the Fairfield store and a recently opened store in a Cincinnati suburb — offer pretzel items in dedicated 6-foot service cases.

“We sell that case out every day,” Wullenweber said.

'Haven't Taken Off Yet' at Brigido's

“They haven’t taken off yet, but we haven’t sampled them enough,” Bonanca said.

“We have two varieties, round and sub rolls. We’ll be sampling them on weekends, probably with dipping cheese or dipping mustard. We figure, too, the commercials on TV, Wendy’s and Sonic’s, will help.”

Brigido’s pretzel rolls are part of a significant expansion of varieties.

“Last year this time, we had just four roll varieties. Now, we have 12. Some of the new ones are onion, Portuguese and garlic knot rolls. We see sales growing across the board,” Bonanca said.

Two major factors are driving sales, Bonanca said. “There are so many new ones to try, and customers can buy one roll at a time. That’s important because we have a lot of older clientele. They don’t want to waste anything.”

Adding new items in the roll category has led to some interesting hybrids, bringing to mind the Cronut, a combination croissant and doughnut, which was created in New York and spawned knockoffs in other parts of the country.

At Bristol Farms, the chain’s director of bakery and coffee, Robin Bell, created a pretzel croissant that’s doing very well, Poling said. He described the new entry as having the texture of a croissant and the flavor of a pretzel.

“Robin ran the idea past me a few months ago, and then she worked closely with vendors to perfect it,” Poling said.

McConnell has already bolstered the variety of rolls, bringing up the category to 12 different types, half again as many as the bakery offered a year ago.

“Right now, multi-grain rolls are very popular. Those and French rolls,” she said.

McConnell also is having success with take-and-bake boules.

“We just started a program with a new supplier and we’ve taken a new route of take-and-bake. Ciabatta and small dinner rolls are doing very well. A six-count, take-and-bake dinner roll, especially,” the chain’s bakery director, John Chickery, said. “There’s no waste. A customer — all of them are mindful of their dollars these days — can bake one or two rolls, and freeze the others.”

Chickery theorizes that the smallness of a roll vs. a loaf of bread is the sales driver. That may be one reason, but an analyst at NPD Group, Port Washington, N.Y., sees rolls’ convenience as their major attribute.

“The No. 1 food consumed in this country is the sandwich, and the roll is a very convenient carrier for ingredients,” said Harry Balzer, NPD’s chief food industry analyst. “Not only that, but sandwich consumption is growing at breakfast and dinnertime. People are having sandwiches for dinner, and dinner sandwiches tend to be hot. A roll is a much better carrier for hot  ingredients.”

Balzer also said that while it’s common knowledge that consumers want “fresh,” he’s certain that they want “fresh and convenient.”

“If I buy a loaf of bread,” he explained, “and take it home today to make a sandwich for dinner, that bread will be fresh, but tomorrow morning, I’ll have several slices of day-old bread on my hands. That would not be so if I had bought a roll for my sandwich.”

In agreement with Balzer and with other retailers SN talked to, Peggy Kallias, assistant bakery manager at Marketplace Food & Drug, Minot, N.D., has found that Marketplace can keep sales rising by making it easy for customers to buy smaller numbers of rolls, and thus spend less and waste less.

“We have [self-service] bins of rolls so customers can buy one at a time, and we’ve also made packages smaller count. We have a four-count package of some varieties, and if a customer wants only two rolls, we’ll break open the package and sell them two, or one, if that’s what they want.”

While bread sales may not be hopping elsewhere, retailers are taking measures to pump up the category with new versions.

Bonanca at Brigido’s, for instance, is about to launch “everything” bread.

“It’s the same mixture that’s used on ‘everything’ bagels. We’ll bake it on a full-sized loaf of Italian bread.”

Meanwhile, Jungle Jim’s sells half loaves of several specialty breads on weekends, and it’s the half loaf that’s key to sales, Wullenweber said.

Multi-grain is very popular, she said.

Other retailers said whole grain sales are revving up. “It leads the pack,” Brous at Publix said. “One hundred percent whole wheat and whole grains continue to be popular.”

“For example, recent whole grain artisan breads registered with us include a pumpkin pecan boule and wheat cranberry bread. We’re also seeing whole grain focaccia and ciabatta — so these two trends don’t need to be vying with each other!”