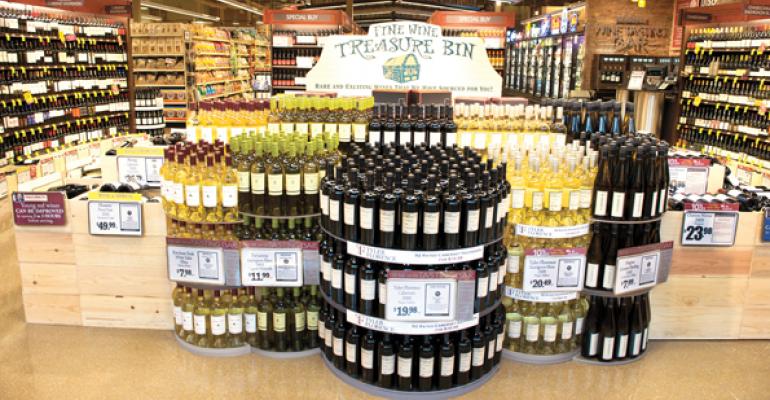 Wine Has a Rosé Outlook

Vin Hunter, the self-proclaimed “wine sleuth” for Heinen’s Fine Foods, recently took to Twitter and tempted shoppers: “Wine on tap? Yes! While you shop, only at the Heinen’s in Pepper Pike.”

The 18-store retailer’s fictional character has been a regular in the marketing department for more than a decade, alerting customers to great wine finds and incredible deals. In this particular instance, he was promoting the availability of wines for sampling at one store where it’s legal to offer such shopping incentives.

Hunter is a newcomer to social media, his boss explains.

“It’s just starting out, but it’s already a great way to connect the source to the audience on a pretty quick basis,” said Ed Thompkins, the real Vin Hunter who serves as Heinen’s wine and beer buyer.

Digital marketing comes along at a perfect time for supermarket wine departments, which have been casting about for fresh ways to attract consumers. Retailers say traditional events like dinners belong to an era that’s quickly drawing to a close, and wine lovers are eager for new opportunities to interact with vintages and their fellow oenophiles.

“There seem to be a lot less wine dinners all over during the last few years,” observed Geoff Nicoll, director of wine and spirits at Bristol Farms, Carson, Calif. “I don’t know if they’ve worn out their welcome or what.”

Bristol Farms offers wine at 11 of its 12 namesake stores, as well as two stores it owns under the Lazy Acres banner. While the retailer might not be keen on elaborate dinners, the six-wine, $20 Tuesday and Thursday tasting events hosted by several stores with cafes for some 25 years are as popular as ever.

“They’re more of a laissez-faire, happy hour-type event. We have them in seven of our stores, and they’re very successful,” Nicoll said.

“Sometimes we have visiting winemakers or suppliers; otherwise people just like to relax and enjoy the evening. We have a core group of regulars.”

Dinners that add digital elements can still attract crowds. Dierbergs Markets, Chesterfield, Mo., organizes a popular series of events that are led by a host via Skype, the Internet-based audio-visual communications service. A recent wine dinner was coordinated with Tyler Florence to promote his own-label wines.

“He skyped from California, walked guests through the various wines and had them sample as he spoke,” said Todd Vasel, a spokesperson for the chain. “The Skype format allowed guests to ask questions directly of Tyler. When the tasting event was complete, we moved the class into an appetizer cooking session where we paired foods with the featured Tyler Florence wines.”

Dierbergs has held other Skype-based occasions inside the Culinary Event Center at its new Des Peres, Mo., store, but the Tyler tasting demonstrates that the wine category can keep up with advances in technology — a key to winning new consumers, notes Heinen’s Thompkins.

“Social media seems to be the only source of information for a lot of people, especially the younger consumer, so you need to be active in that arena,” he said.

Wine sales are also getting a fresh boost from the most unlikely of sources — and it’s right across the aisle.

Specialty beers have captivated American consumers, and there’s no end in sight to this love affair.  According to Mintel, sales of craft beer nearly doubled between 2007 and 2012, increasing from $5.7 billion then to $12 billion now.

“You can only grow the audience so much,” said Nicoll of his efforts to sell wine during the ascendency of craft beers. He noted that a beer dinner held “in season” in Palm Desert sold out in a mere two days. 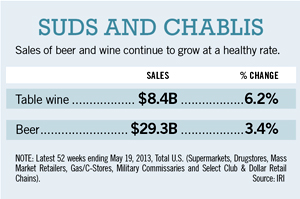 “Trying to attract a new one is always a great challenge. You can only sell so much wine to the same customer,” he said.

Industry observers agree that the trend has been apparent for several years now as brewers — and their brews — get bolder.

“Most of the beer is very flavorful, some high in alcohol, so they behave like wine in many regards,” Brian Sudano, managing partner of Beverage Marketing Corp., told SN. “The beer industry has presented themselves very similarly to wine with larger, multi-serve packages, use of corks, food-pairing notes, and the like.”

Retail wine directors have been tempering the competition by using beer’s popularity to recruit consumers willing to try compatible wines. At Heinen’s, a “brew/wine” dinner at a local restaurant pairs certain foods with ideal wines and beer.

“This is a new frontier,” said Thompkins. “It shouldn’t be a wine or a beer question. It should be a wine and beer answer to a food.”

The dinner includes four wines and four beers, and each course has a matching food. For those looking to increase wine sales, it’s one of the more creative ways to find new customers.

Beer and wine also shared the spotlight on June 8, when Dierbergs hosted Sip & Savor, a benefit for Angels’ Arms, a local organization serving foster families. The happening took place again at the retailer’s Des Peres store, but inside the parking garage. According to Vasel, more than 300 people attended and enjoyed sampling from a selection of 238 wines and beers (as well as spirits), accompanied by food vendors including Dierbergs Kitchen.

“In this case, we had experienced buyers taking advantage of case discounts and casual converts supporting Angels’ Arms while getting a very relaxing education about various wines,” he said.

Some wine departments are also installing beer tap-like stations that offer preset pours of wines at ideal temperatures. One such system, the WineStation 3.0 from Napa Technology, Campbell, Calif., preserves vintages for a longer period of time, and is more approachable for many novices than sampling events, according to company officials.

“What retailers are capitalizing on is that, not only are customers more willing to buy something that they taste, it’s giving them an experience to try wines they might not have otherwise tasted at all, or in pricepoints they otherwise would have shied away from,” said Jayne Portnoy, Napa Tech’s vice president of marketing and brand strategy.

In the meantime, retailers continue promoting wine the old-fashioned way — with big displays and great prices. Earlier this month, Nicoll launched a marketing blitz throughout every Bristol Farms department to remind customers that there’s a wine for every occasion. The Summer Sippin’ campaign places four varieties of wine in the meat, seafood and cheese departments, two in bakery and produce and eight by the front door.

“It’s a meaningful display with lots of sign work,” Nicoll said of the initiative, which is being promoted through the chain’s weekly email blast, a weekly Twitter special, and mentions on Facebook.