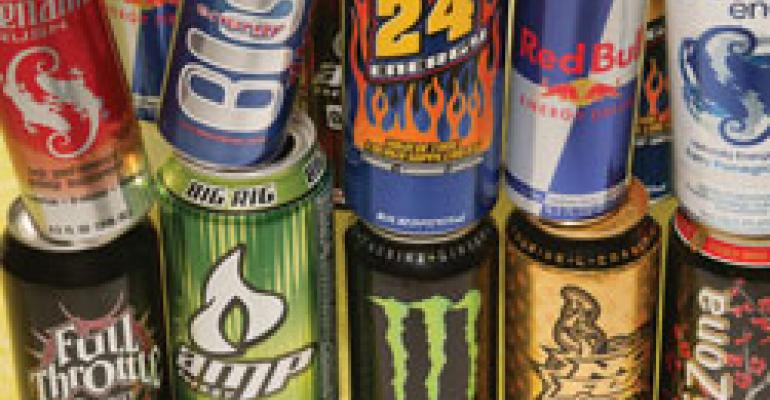 All Hopped Up and No Place to Go

A new report out notes that Americans guzzled about 262 million gallons of energy drinks last year, up 47% from the year before. To keep up with demand, retailers have needed a few swigs themselves as they busily swap out cases of slower-moving carbonated soft drinks and juices for anything containing caffeine, taurine or guarana.

A lot of the sales activity is taking place in the convenience channel, but most of the movement there is in single-serve cans. Supermarkets are benefiting by selling multi-packs at a pretty good premium.

The report, by the marketing research firm Zenith International, found the average U.S. consumer downs more than half a gallon each year — second only to the zippy citizenry of Thailand, which enjoys a per capita consumption rate of just over 3 gallons. But all eyes are on the United States, where, according to the researchers, consumption will grow the fastest, doubling by 2011.

The category is dominated by the top five brands. Just about anyone can name at least a few of them: Red Bull, Monster, Rock Star, Full Throttle and SoBe No Fear. With names like these, it’s obvious the drinks are aimed at young male teens. Luckily for the rest of us, the study notes a maturing category may result in softer, less-hyper formulations for women and adults. The buzz will continue to come from natural sources.

Amid all the action, though, is a real downer, at least as far as one of the stimulants is concerned. An oft-cited study on caffeine abuse found more than 250 cases of medical complications from caffeine supplements called in to a Chicago poison control center over three years. Of those, 12% ended in hospitalization.

Right now, the Food and Drug Administration does not require drink manufacturers to list the amount of caffeine they put in their products. Maybe they should. As the energy drink category grows, safety questions are going to start popping up. In California, they already have. An advisory board is calling for a study on the effects highly-caffeinated beverages have on pregnant women.