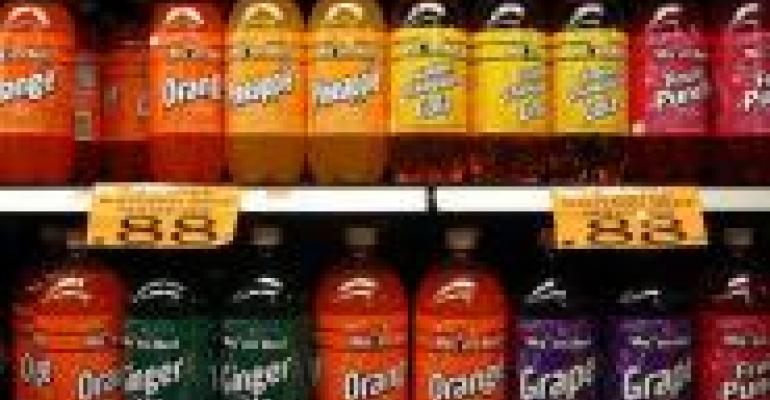 A trio of beverage reports out this week all come from different sources, and consider different questions — but there’s a common thread that ties all of them together: obesity.

Two of the studies focus on carbonated soft drinks and other sugary beverages in our nation’s schools. The first compares deliveries of soda and full-sugar beverages to schools in 2004 to those this year. The numbers are down a whopping 95%. The ongoing initiative — headed up by the American Beverage Association (and big manufactures like Coke and Pepsi), the Clinton Foundation and the American Heart Association — has stressed 100% juice drinks, teas and flavored waters (though high school-age kids can additionally opt for diet drinks).

The program was introduced formally in 2006, in response to data showing that two-thirds of all Americans, including one in three children, have serious weight problems.

Against that backdrop, a second report unveiled at a heart disease convention this week shows that the increase in full-sugar beverage consumption has brought about 130,000 cases of diabetes and 14,000 cases of heart disease over the past decade.

The study’s lead author says that the greatest risk right now is to younger people, age 35 years and under.

"No one argues that these drinks are not fine in moderation, but over the past decade their consumption has been on the rise, while consumption of other beverages has declined," Dr. Kirsten Bibbins-Domingo, senior study author and an associate professor of medicine at the University of California, San Francisco, was quoted as saying in a Reuters story.

The ABA, which shined in the spotlight of the first report, responded to this one by noting the study has yet to be peer-reviewed and published, and so really cannot be accepted at face value.

Finally, a third study tracking the effects of light alcohol consumption on women and obesity found that imbibing a bit actually helps women control their weight. Researchers in this instance found that females who drink one or two alcoholic drinks every day are 30% less likely to gain unwanted pounds. The findings are good news for middle-aged and older women with a normal body weight at present.

One last note: These newest findings contradict previous results finding that alcohol consumption could increase the risk of certain cancers.

Reports like this — particularly the first two — will figure prominently as lawmakers in several large cities and states close in on their separate plans to begin placing additional taxes on unhealthy foods and beverages.

Of course, the official reason is to guide consumers to better dietary choices and to help pay for medical care for those who suffer from diet-related diseases. But these are also governments facing huge budget deficits. It’s a convenient meeting of need and opportunity, with a splash public health education.