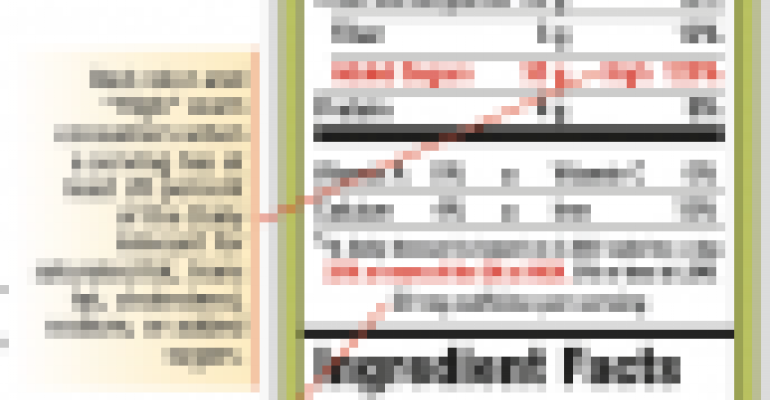 There’s considerable talk about the ways the Food and Drug Administration might change the rules on nutrition labeling. The agency said in October that it would review front-of-pack labels for violations, and there’s good evidence that it will implement a universal system.

The Center for Science in the Public Interest — one of the more vocal critics of the current, disorganized labeling landscape — just weighed in with its recommendations. You’ll recall that back in 1990 the CSPI successfully campaigned for the legislation that brought us Nutrition Facts. Now, the group says, the Facts aren’t as useful as they used to be — food companies have figured out ways to skirt them and mask what’s really in products.

To ensure complete transparency, the CSPI recommends several changes to the Nutrition Facts panel. First off, make the type showing calories and serving size bigger. Second, provide context for servings of fat, sodium, cholesterol and so on by indicating high content percentages in red. And rather than list ingredients by prevalence, separate the major ingredients from the minor ones, and group these together so consumers can see the different types of sugars, oils and so on.

The group also wants the FDA to get stricter on claims like “Strengthens Immunity” and “0 Grams of Trans Fat” that it says can be deceptive.

Some of this will no doubt make the Nutrition Facts label easier to read. I have to say, I really like the idea of providing context, since many consumers don’t know how much is too much sodium, or when something’s beyond the recommended amount of fat.

But some of the rearranging and font-changing seems superfluous. The people who fully understand Nutrition Facts don’t need this, and those who don’t understand the label in the first place won’t be helped any further. If you’re concerned about calories, you’ll look for them; you don’t need them blown up to finally say, “Oh, there they are!”

It’s important not to make matters more complicated by throwing more information at people. Efficiency and transparency need to be the focus here. Not an easy task, to be sure, but the FDA is clearly working hard, and groups like CSPI are keeping the issue on the front burner, where it belongs.