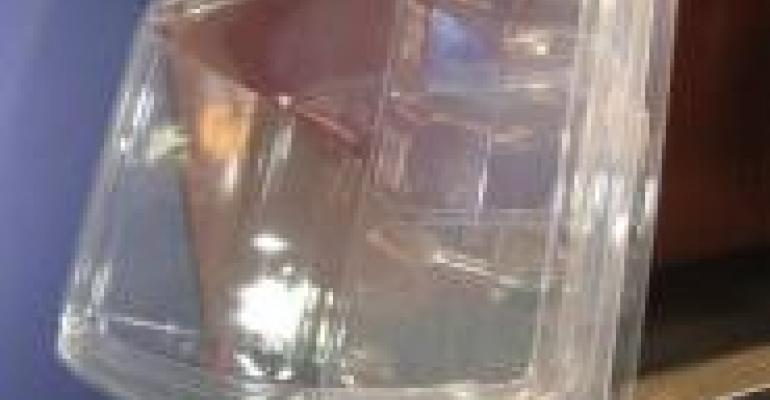 With consumers and retailers also still pressed for time, it looks like packaging manufacturers are coming to the rescue. At least that’s what I observed on the show floor at IDDBA’s Dairy-Deli-Bake 2010. Retailers and seminar speakers spoke of everybody’s quest for convenience, and exhibitors told me retailers are asking them to design packages that better shows off food, keeps it safe from tampering, and and above all that is easy for customers to use.

Clear Lam, Elk Grove Village, Ill., is designing see-through compartmentalized containers at the request of retailers. One interesting one, designed for Safeway, holds lettuce or other greens in a large shallow, round container, and has six separate, small compartments for toppings and dressing heat-sealed with film into the lid.

Another holds a whole meal, with the entrée and sides in separate compartments, keeping contents very visible, and decidedly separate from one another. Jeanne Skaggs, vice president of research and development for Clear Lam, told me retailers – unlike in the past when they just bought was available – are increasingly telling manufacturers exactly what they want and how they want to use packages.

“They want packaging that’s convenient for them and for their customer, but they make it clear they want the contents to be highly visible, Skaggs said.

“I think the salad package with the toppings in the same package, but separate from the greens, does that well,” Skaggs said.

She went on to point out that the packaging is 90% plant-based and compostible.

I saw other exhibitors showing off compartmentalized, heat-proof, containers that showed food off well.

Convenience is being created not just for theconsumer, but for retailers themselves. That’s evident in a new Cryovac package I saw for bulk deli meats. It has an easy-to-grab-and-tear top that, when pulled, neatly splits the package right down the middle. No fiddling with a knife, no damage to the product. Time saved. Butterball, who is using the new packaging on turkey breast, demonstrated it to me at their booth.