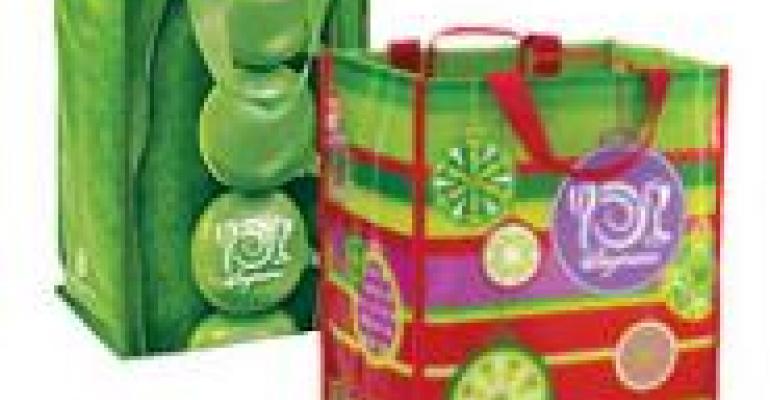 UPDATE: Winn-Dixie announced late today that they are pulling all their reusable plastic bags while the industry figures out how to properly, safely dispose of them.

The Jacksonville, Fla.-based retailer is offering refunds on bags already sold, and is accepting them for disposal. Again, the concern isn't that the bags are harmful to food or humans, but that the lead in the material will harm the environment once they're disposed of. Read on for the full story.

Move over Wegmans. Other supermarkets are finding out that some styles of reusable shopping bags they’re offering to customers contain elevated levels of lead.

The latest chains to become aware of the hazard are Publix and Winn-Dixie, both based in Florida. The alert came from the Tampa Tribune, which conducted tests on the bags.

“And some bags had enough lead that they could be considered hazardous waste if residents put them in their household trash,” the newspaper wrote.

Publix, which has a progressive sustainability program (it’s been offering reusable bags in one form or another for more than 20 years), has reportedly gone back to suppliers asking for changes. The chain told the newspaper, however, that the current batch of bags does comply with federal safety laws.

The chain touts its promotion of alternatives to paper or plastic: “In mid 2007, we began selling other types of reusable bags that contain recycled material and are recyclable when they wear out,” Publix website states. “Since then, we have sold over 13 million of these bags and given away many more.”

A sustainability page on the retailer’s website even keeps a running tab on the total of paper and plastic bags kept out of the waste stream due to the company’s reusable bag programs.

The issue first came to light in September, when a couple of consumer watchdog groups, the Empire State Consumer Project and Rochesterians Against Misuse of Pesticides, performed tests on bags from Wegmans, the 76-store chain based in Rochester, N.Y.

Two bags (shown above) tested by the group showed lead levels higher than allowed in the state (one of them was 8 times over the limit). After confirming the results, Wegmans withdrew the recycled plastic bags, which were made in China.

Chain officials pointed out that the problem isn’t that consumers would suffer ill effects from exposure to the bags, but of safe disposal and the environmental impact the bags will have once they are discarded. Now the same scenario is unfolding down south.

If they haven’t already, supermarkets selling or giving away these type of recycled plastic bags might save themselves a headache by pre-emptively testing their wares for lead and other potential contaminants. It’s better than having the media doing it for you, and then calling you on it.