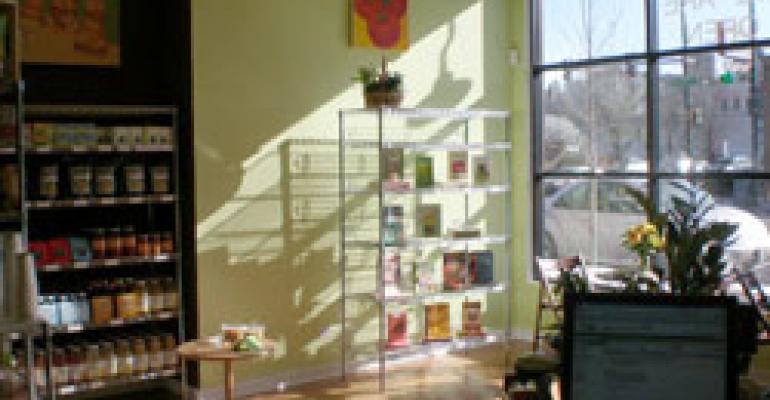 It’s always great to hear from independent natural and organic retailers. Many of them are passionate, uncomplicated operations that have their finger on the pulse of their community and the movement. We recently spoke with Cassie Green, owner of Green Grocer Chicago, a 900-square-foot store that opened last week in the windy city’s West Town neighborhood, and got her insights on what it’s like to be a small store in the big city.

Describe the location and the neighborhood. Why is it ideal for your store?

Within a square mile of our store location, there are 44,000 residents. So it’s a really concentrated group of people, especially when you consider that the closest grocery store is a mile away. It used to be a rough neighborhood, but in the past two to three years the housing prices have gone up 30, 40, 50%, which is kind of insane. But it’s still a mixed neighborhood. There are a lot of people who take interest in the social aspect of our store and our mission, as well as people with a lot of money. In both cases, they’re willing to spend more on groceries. It’s interesting to see who comes through the door.

How are you getting the word out about Green Grocer?

We’re operating on a shoestring budget, so we had to be creative. We had our friends go around the neighborhood and tape our coupons to people’s front doors. We also give coupons to every customer that comes in, and we often ask if they have friends in the neighborhood who’d like to stop by. Then there’s the owner of the video store across the street — her name’s Tootsie, and she’s this 5-foot-tall sassy blond who grew up in the neighborhood, knows all the gossip — and she sends all her customers over. So we’ve had a lot of our customers do the marketing for us, and they’re all for it.

Your store makes a point of selling local products — what are some interesting examples of these and the relationships that come with them?

One of our best selling brands is Tomato Mountain Farms, owned by a guy up in Wisconsin named Chris. We also source from a company that’s three blocks away that makes roasted beet chips called papalenas. They’re so good. We sampled those, and we ran out in the first three cases within a few days. So I walked up there and grabbed a couple more cases. There’s also a pasta sauce that we get from about a half-mile away, from a company called Coupla Guys Foods. I work with the owner Joe and his wife.

Do you offer prepared foods, a salad bar, things like that?

The store is tiny, but we do have some stations. We do a drip coffee so people can come in and grab a cup real quick. We have an area with prepared foods. There’s a local guy who does organic and seasonal catering, so we have him to make sandwiches and salads so people can grab and go. There are a couple businesses in the area, so we actually do a pretty decent lunch business.

Why is now a good time to open a local-and-organic store like this?

The awareness is there now, and that’s a huge benefit to a small store like ours. People are beginning to understand what terms like organic and local actually mean. I also think that people are appreciating more of a personal experience while shopping. Having a store that’s 100,000 square feet is not as appealing as having a store where you have that personal connection, where people know your name.