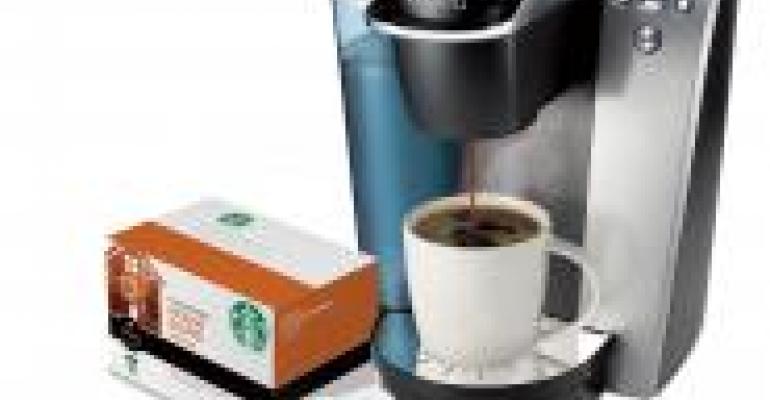 Starbucks in a K-Cup

A lot of times, the big players in any industry will wait to enter a category. They stand on the sidelines, assessing the competition, gauging their timing and then, look out: Splash.

In this case, the brew-ha is landing in a coffee mug, as Starbucks formally announces its rollout plans for new Keurig K-Cup packs bound for the food, drug and mass channels just in time for the holiday buying rush.

By the way, this is the first major retail push Starbucks has made since last December’s acrimonious divorce from Kraft, which ended a 12-year distribution marriage.

The packs will join those odd Starbucks VIA instant coffee bags which surpassed $200 million in sales (Starbuck stores and supermarkets) in its first year.

According to the company, Starbucks coffee K-Cups will be available in the brewer’s most popular coffee varieties, including Breakfast Blend, Pike Place Roast, House Blend, Sumatra and French Roast.

The company also has something for tea lovers. Tazo Awake and Zen will both be sold in portion packs as well. Coffee pack sizes will be offered in 10-count, 16-count, and 54-count boxes, while Tazo tea will be available in 10-count and 16-count packs.

The arrival of Starbucks is expected to result in a shakeout of smaller companies, and that might include manufacturers of the single-serve appliances. While Starbucks dominates the coffee trade, Green Mountain Coffee Roaster’s K-Cup machines (GMCR acquired manufacturer Keurig is 2006) overwhelm competitors with a portfolio of machines found in homes, offices and just about everywhere in between. The company already offered more than 200 varieties of coffee, tea and hot beverage drinks before it inked the Starbucks agreement.

According to SymphonyIRI, single-serve coffee sales reached $240 million in supermarkets over the past year, largely as a result of new brand-name introductions. Sales were up more than 136% over the prior year. Single-cup coffee sales overall topped $2 billion last year, and it’s obvious that supermarkets are shifting displays and conducting reviews in order to make room for more single-serve packages on the shelves.

With the arrival of Starbucks, those shelves are going to groan.