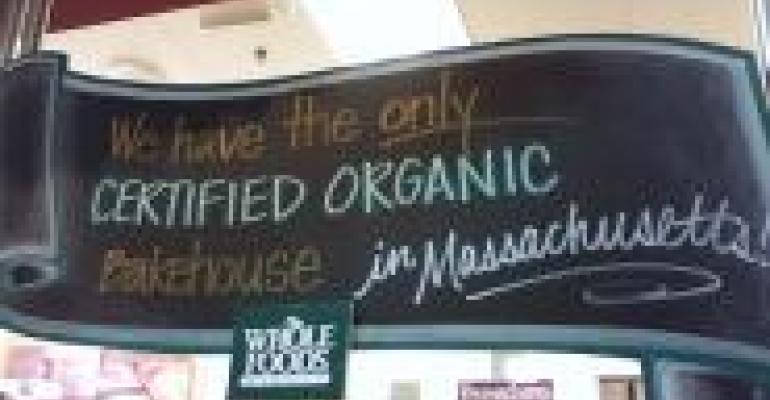 I wish I could take credit for the phrase used in the headline, but it came from a story I spotted in the Philadelphia Inquirer this week about a burgeoning eco-kosher movement that seems to have its roots in the City of Brotherly Love.

Eco-kosher! Now, what the heck does that mean? Kosher food is already popular with non-Jews who like the sanitary and processing standards that govern the ancient law of Kashrut. Food prepared under kosher supervision is said to be cleaner, and therefore, more healthful.

Such beliefs have propelled sales of all kosher foods in the United States to new highs. According to Packaged Facts, sales of certified kosher foods in the supermarket channel topped $200 billion in 2008, up from $150 billion in 2003. Countless numbers of supermarkets serving large Orthodox populations have set up kosher delis, meat departments and bakeries – including Wakefern/ShopRite, Supervalu’s Jewel-Osco banner, Whole Foods (pictured) and Safeway-owned Genuardi’s, to name a few.

Kosher covers the processing and preparation of food, but it does not yet include the fairly new concepts of sustainable agriculture, worker welfare and all the other intangibles that increasingly make up the whole health movement.

“The emphasis now is on what it really means for a particular food to be fit to eat,” Mark Kaplan, a Reform Jew who has helped start community-supported agriculture programs with synagogues, told the Inquirer.

Consumers of kosher foods can soon expect to see a new symbol coming out, perhaps as early as 2010. Besides the circle K, food sourced and prepared in an ethical fashion will be certified with a Magen Tzedek, which apparently means “Shield of Justice.” According to a spokesperson for the organizers behind the effort, the symbol will be — in the words of the Enquirer story, “a stylized Star of David, designed ‘not to look too Jewish-y.’”

You have to hand it to ancient religion. No grey areas here. These are Old Testament, fire-and-brimstone standards. Better not try to pull a fast one. I mean, would you NOT trust eating anything certified with a "Shield of Justice"? To these secular ears, it sounds like my yogurt just got delivered by Brinks, under FBI cover. Eat without fear.