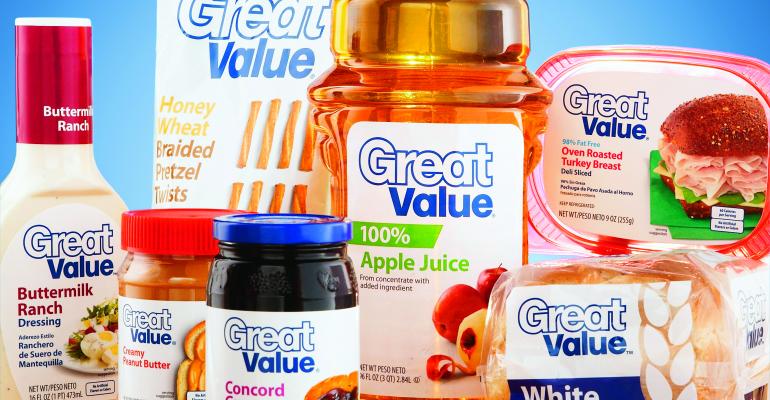 One year ago Wal-Mart announced its grand plan to offer healthier and more affordable food in its stores. Today, the company took a significant step in that direction by unveiling a front-of-pack label that incorporates some surprisingly strict nutrition criteria.

The standards for the new “Great For You” seal borrow from recommendations contained in last year’s report submitted to the Food and Drug Administration by the Institute of Medicine. That report, if you’ll recall, recommended an easy-to-understand, highly publicized rating system that reflects the amount of calories, sugar, fat and sodium contained in a given product.

With the new Great For You label, Wal-Mart customers are getting everything but the tiered rating system. Instead of stars or numbers, the company opted for an all-or-nothing claim that incorporates limited amounts of the key ingredients identified in the IOM report. The details are fairly complex — and can be found here for those who wish to peruse — but broadly speaking, the standards exclude 80% of all eligible products, which right now are limited to Wal-Mart’s Great Value and Marketside private label offerings. That’s a higher bar than previous industry initiatives, and it goes against the Grocery Manufacturers Association/Food Marketing Institute’s current “Facts Up Front” label that displays key ingredients on the front of packaged products.

Many people, including Nestle, are wondering why Wal-Mart chose to pre-empt the FDA in developing these guidelines. The FDA has said it’s working on front-of-package standards using the input from the IOM, but waiting on the overburdened agency to come to a decision is like waiting for rain in the desert. Consumers want and need solid guidance like this now.

As with every move Wal-Mart makes, the most important question is what sort of impact this will have on the rest of the industry. As the company expands the Great For You program to national brands, there’s potential for significant product reformulations. Voluntary initiatives and threats from the FDA have had limited impact on the healthfulness of products over the past few years. But with Wal-Mart’s dangling carrot, we could see a new class of healthy products hit the market are made specifically to meet the Great For You benchmark.

Wal-Mart is setting an example by reformulating some of its own products like its Great Value ketchup, which now has 15% less sodium. These changes will be gradual, as they should be. The recognition of qualifying Great For You products, on the other hand, will be immediate, and that could be a great thing.