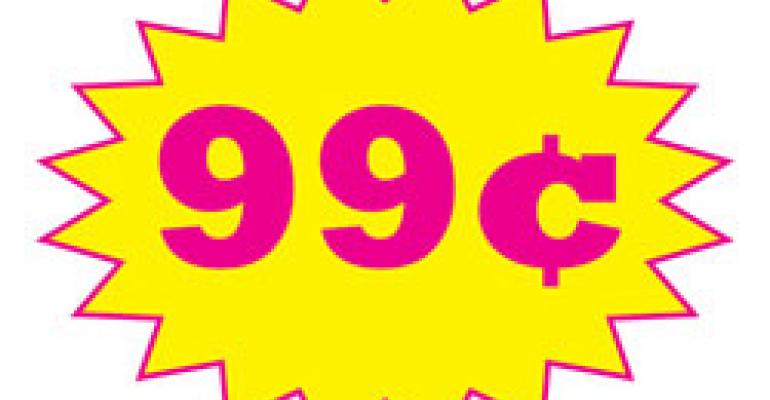 Spruce up your signage and polish those shopping carts: Bargain hunting season is officially open.

Recent studies show that consumers are clipping coupons, trading down and making fewer and fewer shopping trips per week. This is good news for the likes of Dollar General, which offers more than 30% of its stock at a dollar or less. Indeed, ultra-low-price shopping seems to be catching on. This month, book publisher Adams Media released “The 99-Cent Only Stores Cookbook,” which includes a selection of gourmet recipes using only products bought at bargain basement prices. Chicken Tetrazzini, Pinot Noir Poached Pear Tart, and Artichoke Spinach Bake are just a few of the dishes that writer Christiane Jory was able to cobble together. The New York Times also recently turned a gourmand loose in $.99 stores around the city.

Mainstream supermarkets can’t exactly go toe-to-toe on the $.99 format, but they do have an array of healthful and gourmet bargains of their own. Take locally grown and seasonal produce, for instance. Or private label offerings, ala Safeway’s “O” Organics line. Products like these are economically and nutritionally sensible, and retailers would do well to play up their value.

At the same time, though, don’t forget about shoppers who covet premium priced natural and organic products. Supermarkets are seeing more and more of these loyal consumers as they ramp up selection, and they should start seeing people who are trading down from Whole Foods and restaurants during a recession.

Given their size and variety, supermarkets also have the marketing advantage over bargain outlets. With the right in-store display, they can make that can of organic garbanzo beans look like a million dollar find.