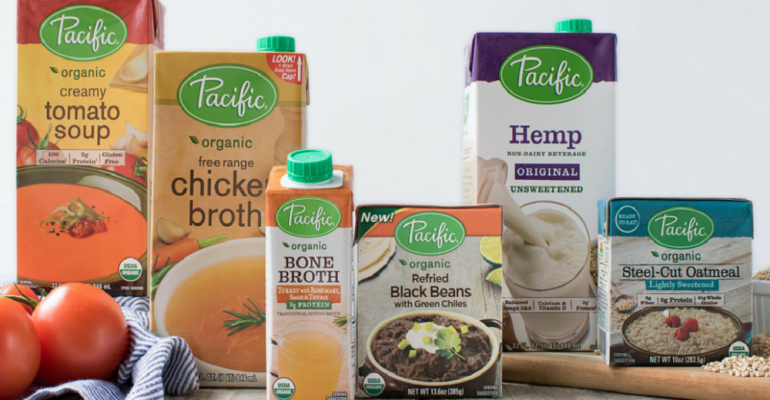 The deal would be Campbell’s fifth acquisition in the last five years, and the fourth of a natural/organic food company, as it attempts to remake its portfolio around the burgeoning health-and-wellness movement.

Pacific, based in Tualatin, Ore., makes organic broth and soup, shelf-stable plant-based beverages and other meals and sides. It had sales of $218 million in the 12 months ended May 31. Campbell described Pacific as natural foods industry pioneer with strong health and well-being and organic credentials, particularly with younger consumers.

“Pacific is an authentic brand with a loyal consumer following,” Denise Morrison, Campbell’s president and CEO, said in a statement. “The acquisition allows us to expand into faster-growing spaces such as organic and functional food. Moreover, Pacific Foods is an excellent fit with Campbell — strategically, culturally and philosophically. It advances our strategic imperatives around real food, transparency, sustainability and health and well-being.”

Campbell said it plans to bring its scale to Pacific Foods and invest in the business to “drive full force growth.” The company expects to expand distribution; boost marketing support for brand building to engage consumers and shoppers; and invest in R&D and the supply chain.

Pacific was founded in 1987. CEO and co-founder Chuck Eggert will stay on as a supplier of key ingredients through his family farms. “We’ve spent the past 30 years focused on making nourishing foods with an emphasis on simple, organic ingredients and authentic, rich flavors,” Eggert said. “Looking ahead, a future with Campbell means we can maintain what we value while accelerating growth of the brand in a way that we couldn’t do alone, reaching more people while increasing our impact on sustainable agriculture.”