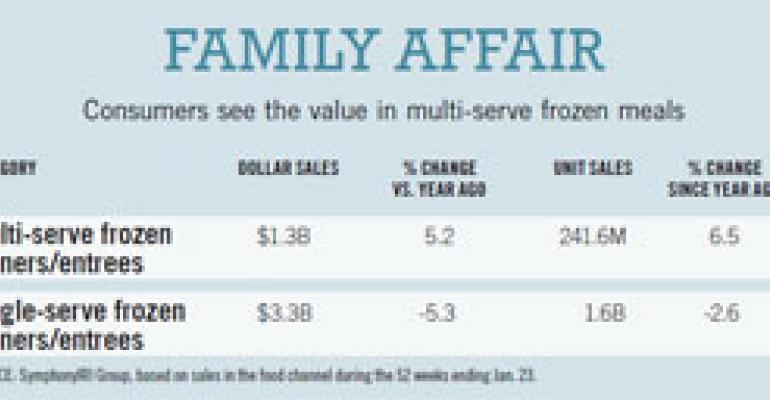 In the past year, low-priced entrees have heated up the frozen-food section, but now a different measure of value may cause the temperature to rise as manufacturers switch to whole grain pastas, add sides of grilled vegetables and shake the salt (in a healthy way).

CPG companies should be commended for their efforts, but they don't deserve all the credit. If consumers are noticing better-for-you entrees on the shelves it's because gatekeepers are demanding them.

“The low-salt thing is a very big deal to us,” he said.

So big in fact that serving sizes exceeding 700 mg often prompt requests that suppliers head back to the drawing board and reformulate recipes before pitching products again.

Whole Foods sets the bar high considering that 700 mg is less than one-third of the 2,300 mg limit recommended for the 50% of Americans not considered salt-sensitive, or less than half of the 1,500 mg per day recommended for African Americans, those 51 years of age or older and people suffering from hypertension, diabetes or chronic disease. Americans have a hard time meeting these targets, with the average consuming about 3,400 mg per day, according to the American Heart Association.

“I really like to see [servings] at the 300 mg level and let people add salt to their meal if they want to,” said Rich.

Mainstream share leaders aren't represented at the chain, but top seller Stouffer's is among suppliers reformulating for health. It's even remade its TV dinner classic, Macaroni & Cheese, with whole grain under the new Stouffer's Farmer's Harvest line. With help from sea salt, the dish's sodium level has been reduced from 920 mg per serving in 2005 to 820 mg today. That number will fall even lower since Nestlé Prepared Foods Co. plans to further cut salt by 10% across its Stouffer's, Lean Cuisine, Buitoni, Hot Pockets and Lean Pockets brands by 2015. Baselines for Farmer's Harvest items range from 660 to 950 mg of sodium per serving.

Gradual reductions are meant to get shoppers used to the taste. “We wanted to make this change in a way that consumers would adapt to easily and enjoyably,” said Brad Alford, chairman and chief executive officer of Nestlé USA, in a statement. “As it turns out, ‘slow and steady’ has been a successful approach in transitioning this American favorite to this new sodium level.”

Though baby steps make for sluggish progress, manufacturers making cuts in one fell swoop risk alienating shoppers, said Roger Clemens, chief scientific officer for the Institute of Food Technologists, Chicago, who pointed to a soup product that did too much too soon. “It failed miserably and lost millions of dollars,” he said. “It will take time to change the product and it will take time to change our palates.”

Other improvements are more apparent. At a time when the new Dietary Guidelines for Americans recommend filling half the plate with fruits and vegetables, Stouffer's is adding a half-cup side of veggies to some single-serving entrees.

Frozen-food consumers are also thinking more about health. Though price is still paramount, according to 53% of frozen-meal consumers asked by Mintel, whole grains or high fiber (34%), all-natural (31%) and premium/gourmet (28%) are also important.

“We saw increased interest from consumers in healthier offerings that have more vegetables as well as more premium offerings that are free of artificial ingredients, preservatives and additives,” said David Browne, senior analyst at Chicago-based Mintel.

Indeed, healthier offerings are a “nice to have,” but are consumers willing to pay more for them?

A look back at the past year shows that value topped all other considerations, with units of multi-serve meals up 6.5% in the food channel during the 52 weeks ending Jan. 23, according to SymphonyIRI Group, a Chicago-based market research firm. Dollar sales rose just 5.2%, indicating that products were heavily promoted, said Ed Weiss, senior market analyst at Packaged Facts, Rockville, Md.

Another standout was low-priced single-serve entrees sold under the Banquet brand, which rolled its price back to $1, and heavily discounted Marie Callender's meals, whose unit sales climbed 12% while dollar sales rose just 6.6%.

Frozen skillet meals such as Birds Eye Voila and Stouffer's Easy Express also benefited from a lift in sales. The meals are popular since, unlike microwaveable fare, the heating process bears some semblance to scratch cooking, said Browne. Some skillet meals are even becoming staples in the homes of Hispanic consumers, even though the group has traditionally bypassed the frozen section for fresh ingredients. Still, other demographics favor the ease of popping a single-serve meal in the microwave.

“This is Manhattan so people here shop 3½ times per week since it's pretty much about what you can carry home,” he said. “People have small fridges and there aren't a lot of big families in the city.” Prices range from $3.99 to $6.99, with best sellers including natural and organic meals from Amy's Kitchen and Lean Cuisine, Corsello said.

Frozen-entree consumers may have been particularly price-sensitive during the recession, but you wouldn't know it by looking at sales of private labels. Unlike in virtually every other grocery category, store-brand frozen dinners took a nosedive with volume falling 12.2%, according to SymphonyIRI.

But that's not stopped Tesco's Fresh & Easy Neighborhood Market from finding a sweet spot with its Eatwell brand of frozen entrees. Striking the right balance of nutrition and price, Eatwell has bested its big brand competition since its January debut.

Though the meals are positioned as good for you, they're also affordable at $1.99. Shoppers got a chance to stock their freezer with the dinners for an even lower $1.49 as part of a month-long promotion, according to reports. “Making better choices has never been easier or more delicious,” stated promotional messaging on endcap coffin cases that showcased the frozen fare.

Such low prices are likely difficult for national brands to undercut, but value isn't all that Fresh & Easy is hanging its hat on these days. It recently introduced premium, frozen entrees made by in-house chefs to replicate a fine-dining experience at home. Braised Beef in Red Wine Sauce, Mediterranean-style Fisherman Stew and Pork with Portobello Mushroom Sauce meals feed two and retail for $6.99.

“The one thing we've heard consistently is people are looking for more fresh and prepared meal options. Our Gourmet line helps those looking for restaurant-quality items at their neighborhood market,” said Wonnacott.

Indeed, the retailer hopes to build a following with shoppers willing to pay more for quality ingredients. The goal is within reach since “it's not just bargain brands that can benefit from the value strategy,” noted Weiss.