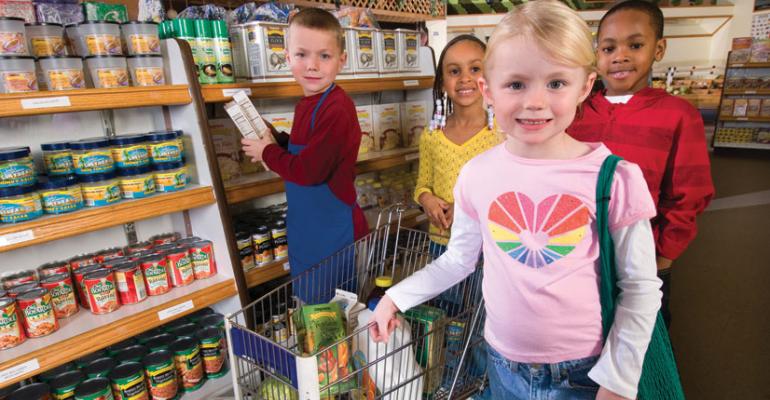 ROCHESTER, N.Y. — Wegmans is contemporizing its smallest footprint “store” to drive home the importance of nutrition.

The Super Kids Market exhibit at the National Museum of Play in Wegmans’ hometown is undergoing a refresh so that it better aligns with the grownup version.

“There will be a big emphasis on organic and gluten-free foods, nutritional guidelines and the importance of eating fruits and vegetables,” said Susan Trien, spokeswoman for the National Museum of Play, of the 15-year-old exhibit created with financial support from Wegmans.

Kids will still be able to troll the 3,000-square-foot exhibit with a mini shopping cart; “work” at meat, seafood, deli and bakery departments; pretend to make brick-oven pizzas; and scan bar-coded products at six working checkstands. But a new Nature’s Marketplace section stocked with Wegmans-brand organic and gluten-free products will better approximate the real thing. Construction of a 400-square-foot Market Cafe with prepared meals, a sushi bar and coffee bar, and a new brick facade with a signature Wegmans clock tower, are also underway.

Most of the new features were added to Wegmans’ actual stores after the Super Kids Market was initially built. “Wegmans has definitely changed since then so we needed to update the exhibit,” Trien said.

Visitors to the enhanced version may notice a healthier mix of product, as the same nutrition criteria that is applied at Disney theme parks will be used to filter  less nutritious food and beverages from the play store.

This presents an educational opportunity since kids scrutinize the foods they consider for “purchase.” “You’re only allowed 10 items so you must choose carefully,” Trien said.

Read more: The Art and Science of Wegmans

While none of the exhibit includes actual food,  youngsters are adept at imagining they’re shopping a real Wegmans store.

“If you talk to any parent they’ll tell you they can hardly get their child out of [the exhibit],” Trien said. “Kids love to role play and pretend to be grownups. It empowers them.”

Indeed, the attraction is the museum’s most popular, with more than a half million visitors each year.

With its sponsorship of the Super Kids Market, Wegmans exemplifies what it means to be part of a community, while making it more difficult for competitors to get a foothold in the Rochester market, said Jim Wisner, president of the Wisner Marketing Group.

“It gives Wegmans a more emotional sense of place so it’s not just ‘my product is better and cheaper than yours,’” said Wisner. “It sends the message ‘this is what living here is all about.’”