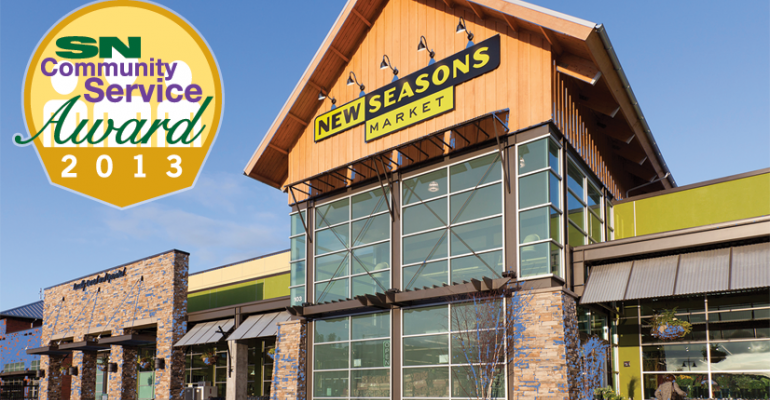 Award Winner Has a Higher Purpose 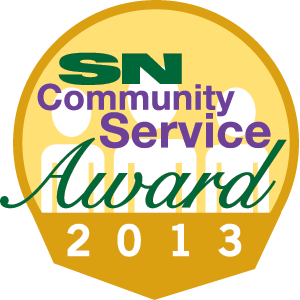 To Collie, that distinction is what makes New Seasons’ approach to community service not just a noble gesture, but a sound business practice as well.

“Take the grocery store out of it and look at business in general, and you’ll see that consumers today are looking for organizations that walk the talk,” Collie said. “They have a deeper appreciation for companies that do the right thing. So over time, supporting the community drives loyalty, frequency and average ticket, and those things add up. You may encounter some short-term costs, but over the long term the gain has a much greater trajectory.”

Having grown from a single store founded in 2000 to 13 stores around greater Portland, Ore., today while maintaining a pledge to donate 10% of after-tax profits to local communities, New Seasons is proof that soul can sell. Its recent achievements include becoming the first grocery store to earn “B-Corp” certification recognizing companies that value staff, local communities and the environment. It partnered with more than 1,000 local organizations last year, donating more than $500,000, and participating in programs ranging from beekeeping to feeding the elderly. These efforts earned New Seasons recognition as SN’s Community Service Award winner for 2013.

New Seasons’ community outreach program includes a variety of programs that allow for giving at the corporate and store level, and includes donations of funds, food, volunteer hours, sponsorships and other means of support. Its main areas of focus are local hunger, education and sustainability programs, according to Claudia Knotek, manager of community outreach and giving for New Seasons.

Knotek in an interview with SN described a philosophy at New Seasons that seeks to align its charitable efforts with the same organizations its shoppers support.

“We feel like we’re engaged in the same things our customers are engaged in,” she explained. “We love to give to an organization that has our customers go to one of their events — such as a fund-raiser for the Meals on Wheels foundation, and have our customers see us there. That’s another reason they shop with us, because they think: ‘They value the things I value. And when they say they give 10% back, I can see it happening in my community. That makes me proud to shop there.’”

Meals on Wheels — the nutrition program providing home-delivered meals to needy seniors — benefits from a 50-cent donation from New Seasons each time a customer buys a loaf of its signature sourdough bread. The retailer also supports local Meals on Wheels providers with dinner donations and special delivery routes in neighborhoods around each of its stores, Knotek said. The support has helped seniors signing up for Meals on Wheels in Portland to wait no more than three to five days to get into the program, whereas waiting lists in other cities can be considerably more lengthy, she added.

Another area in which New Seasons is alleviating hunger is though a program known as “Gleaning Partners,” which aligns each store with four to seven area food pantries that have assigned days each week to collect unused food at its store. Many of these smaller pantries provide to schools for a backpack program. Another is working to reuse unsold prepared foods by freezing them so they can be used as necessary.

“That’s an exciting new opportunity for us and we’re looking to do more of that,” Knotek said. 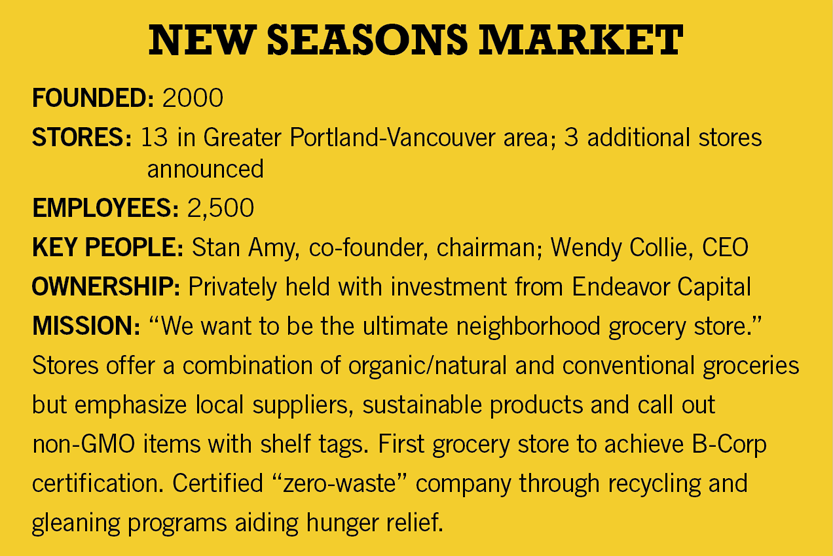 A grant program supporting area farmers’ markets seemingly puts New Seasons in competition for sales of fresh items, but that risk is small compared to the benefit of supporting sustainable agriculture and fighting hunger, Knotek explained. The retailer supports 26 area farmers’ markets, including one that sets up in a parking lot at one of its stores. Although the grant program differs from market to market, many use the grant to match SNAP benefits, encouraging needy families to get healthier foods and providing additional customers for local farmers, Knotek said.

“It’s a huge win-win cycle,” she explained. “Families are getting healthy foods, their kids are experiencing introductions to the farmer and tasting new things, and the farmer is getting the dollars so they can stay on the land.

“We know the farmers’ market is a one-day-a-week thing in most neighborhoods and people need food all the time. And when you’re buying fresh foods and vegetables you still need olive oils and everything else,” Knotek added. “One of our farmers’ markets is in the parking lot of one of our stores but it helps make that particular day at the store its business day.”

Providing in-store opportunities for customers to contribute to the same causes has been nearly as lucrative for area organizations as New Seasons’ corporate programs. Much of that giving — including an annual Donate Dinner holiday program around Thanksgiving — is inspired by trust between New Seasons and its shoppers, Collie said.

“One of the reasons we are so successful with these donations is that our brand and our reputation as an organization is that we will provide these types of opportunities for customers,” she said. “And they look for them because there’s an integrity and trust behind it. It’s not like shoppers get to the register and get asked to give $2. It’s that they come looking for these opportunities because they know we can be a vehicle for that.”

New Seasons supports local sustainability efforts through “Green Teams” made up of employees at each store. These groups participate in neighborhood clean-up efforts, local school projects and other activities as needed. New Seasons appoints a community coordinator at each of its stores responsible for allocating a budget for neighborhood initiatives. The budget can support five or six different projects every month.

“Some of the donations we make are very small,” Knotek said, “but they are very important to their particular neighborhoods.”

Engaged employees — many energized by knowing they work for a company that supports so many charitable efforts — are a main engine of new ideas in this area, Collie noted. An employee with a passion for beekeeping inspired the company to begin raising beehives on the roofs of two stores this year. The effort is intended to support the area bee population with a longer-term goal of providing the opportunity to harvest and sell honey at the very store where it was made.

“I think businesses that have a mission-based focus in terms of how they do their work and contribute to their community and society tend to attract an employee who has like-minded desires and values,” Collie said. “When you do that you attract a different caliber of person. You get a talent base that’s dedicated, committed and engaged and through that alone you tend to have higher tenure, lower turnover, higher productivity and higher engagement. And any employee study will tell you when you increase your engagement level with employees they gain a sense of belonging and you tend to have a service level that is higher than the average company. And when your service level is higher that translates to customers.”

A successful community outreach program is not separate from the business plan at New Seasons, but rather a part of it, Collie said.

“There is a fine balance between getting caught up in the values and mission as an essence, and as a sentiment, and as an emotion, from the business practice,” she said. “You’ve got to be able to have a combination of both so you can be smart about how you do them, so you don’t do them simply for the sake of feeling good. You’re doing things because it feels good and you’re doing good things, and if you can measure that and understand it, then it’s a worthwhile investment.”

Sidebar: Scoring a 'B' 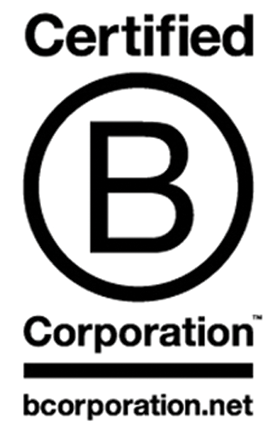 What’s a B-Corp? Like LEED certification for buildings or Fair Trade certification for coffee, B-Corp is an independent measure of a company’s business practices in the areas of sustainability, employee relations and community outreach. The certification is provided by B Lab, a Wayne, Pa.-based nonprofit that advocates business practices with explicit social and environmental intent. B Lab recognized New Seasons earlier this year after the retailer completed a 170-question “impact assessment” that scrutinized its policies and achievements in every area of its business, according to Wendy Collie, chief executive officer.

New Seasons has always been a “mission-based” company known for supporting local initiatives and suppliers, treating employees well, and environmental stewardship. Certification as a B-Corp helped the company see how that effort rated.

“When we applied for B-Corp certification, what we really wanted to do was find a way of measuring our values and make sure we maintain them as we grow,” Collie told SN. “We wanted to be able to adopt a set of standards that would help quantify what we’re doing. What’s really valuable for us is that the B-Corp just validated what we were already doing. And our hope is that we can inspire other businesses that they can do this too.”

The assessment showed New Seasons was doing quite well by B-Corp standards, scoring 120 overall vs. an average B-Corp score of 80, Collie noted. The company scored especially high in the areas of environmental sustainability, reflecting a “zero waste” policy diverting 92% of its waste away from area landfills.

Collie said the chain was proud to be the first — and still the only — grocery chain to attain B-Corp status. Companies that would join them need service “in the DNA of the organization,” she said.

“There’s a lot of companies out there that talk about this and try to do a good job around how they treat their people and how they treat the sustainability and community, but you really have to go deeper and really embed it into the actions and the ownership of your front line staff,” she said. “You have to get your staff and your customers engaged at a level where they’re really passionate and attached to what you’re trying to accomplish.”

While the status helps differentiate New Seasons from competitors, another benefit is doing business with other B-Corp companies, Collie added. These include product suppliers like Kleen Kanteen, Ben & Jerry’s and Seventh Generation, and also service providers like the executive recruiting firm Noto Group, and the Metropolitan Group, a public relations firm.

“B-Corp isn’t a destination but a journey,” she said. “It’s a way for us to be part of a larger community where we can share our best practices and learn from others so we can get better.”