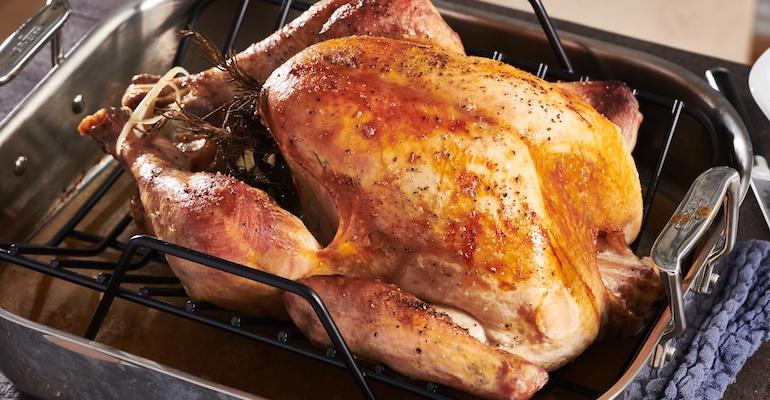 Thanksgiving dinner cost jumps back up

Amid elevated food price inflation, the cost of a traditional Thanksgiving dinner shot up in 2021 following a sizable drop last year due to the COVID-19 pandemic.

“Several factors contributed to the increase in average cost of this year’s Thanksgiving dinner,” Veronica Nigh, senior economist at the Washington, D.C.-based American Farm Bureau Federation, said in a statement. “These include dramatic disruptions to the U.S. economy and supply chains over the last 20 months, inflationary pressure throughout the economy, difficulty in predicting demand during the COVID-19 pandemic, and high global demand for food, particularly meat.” 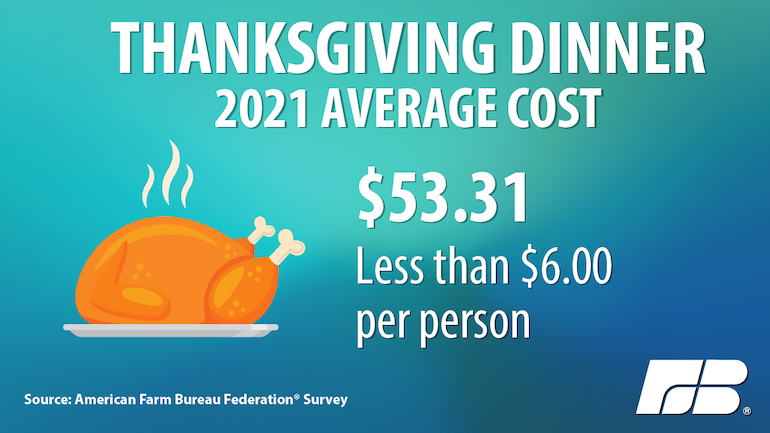 AFBF noted that timing impacted its turkey cost estimate this year. The bureau’s volunteer shoppers checked prices Oct. 26 to Nov. 8, about two weeks before most grocery retailers began merchandising whole frozen turkeys at much lower prices. Although the survey timeline remained consistent in 2021, AFBF said USDA Agricultural Marketing Service data show grocery stores starting to advertise lower feature prices for turkey later than usual this year. Also, the average per-pound feature price for whole frozen turkeys came in at $1.07 the week of Nov. 5 to 11 and 88 cents the week of Nov. 12 to 18, an 18% decrease in one week.

As a result, consumers who haven’t yet purchased a turkey should be able to find one at a lower cost than the survey average, AFBF reported. But the dollar ring for the rest of the Thanksgiving shopping basket still comes in higher than a year ago.

“Taking turkey out of the basket of foods reveals a 6.6% price increase compared to last year, which tracks closely with the Consumer Price Index for food and general inflation across the economy,” according to Nigh. 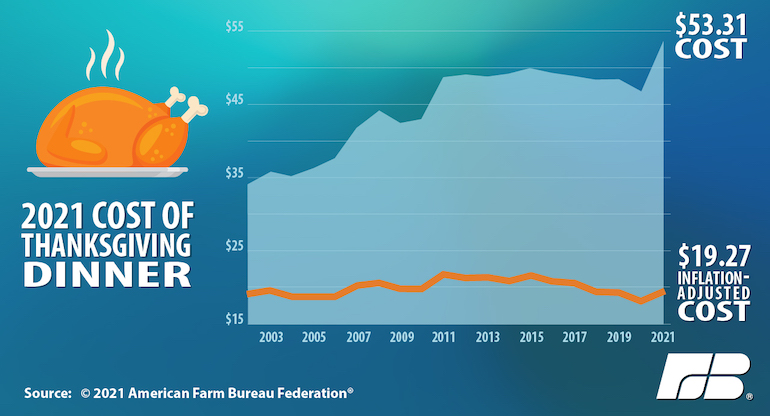 AFBF’s shopping list for the 2021 Thanksgiving Dinner Cost Survey included turkey, stuffing, sweet potatoes, rolls with butter, peas, cranberries, a vegetable tray, pumpkin pie with whipped cream, and coffee and milk, all in quantities to serve a family of 10, with ample leftovers. The national average cost was calculated through 218 surveys using pricing data from all 50 states and Puerto Rico. Volunteer shoppers checked prices in person and online using grocery store apps and websites and searched for the best possible prices without using special promotional coupons or purchase deals.

Of the 12 items on AFBF’s classic Thanksgiving dinner shopping list, including the turkey, 11 had average price hikes versus a year ago.

AFBF’s survey also included an expanded holiday menu with ham, russet potatoes and frozen green beans. Adding those items to the classic Thanksgiving dinner raised the total average cost by $15.41 to $68.72 this year, marking a 14% overall price increase from $60.11 in 2020, when the price tag for the bigger menu declined nearly 4% from $62.32 in 2019.

“The trend of consumers cooking and eating at home more often due to the pandemic led to increased supermarket demand and higher retail food prices in 2020 and 2021, compared to pre-pandemic prices in 2019,” Nigh added.

With consumers well-aware of the upward trend in food pricing, retailers have pitched in to rein in Thanksgiving dinner costs.

Aldi has offered a Thanksgiving dinner for 10 at less than $30 for a second straight year.

According to a Morning Consult survey of 2,200 U.S. consumers, commissioned by Aldi, almost 90% of hosts expect to spend $50 or more on a Thanksgiving meal for up to 10 guests. Aldi said shoppers can spend at least 40% less by purchasing items for the holiday meal through the Batavia, Ill.-based discount grocer, at a cost of less than $3 per person — leaving more money for other potential items such as appetizers, alcoholic beverages and extra desserts.

“Soon we’ll be reconnecting with family and friends around the Thanksgiving table,” stated Dave Rinaldo, co-president of Aldi U.S. “I’m incredibly proud that for less than $30, Aldi shoppers can prepare a delicious Thanksgiving meal, including the turkey, sweet potatoes, pumpkin pie and more. With that kind of savings, you may have room for an extra chair or two around the table this year.”

“As the prices for food rise across the country, Lidl is continuing to give shoppers the ability to put more on the table this holiday season,” commented Stefan Schwarz, chief product officer for Arlington, Va.-based Lidl US . “For less than $30, shoppers at Lidl can provide family and friends a delicious Thanksgiving dinner with all the fixings. We are proud to be part of this holiday tradition.”

In addition, Grand Rapids, Mich.-based Meijer said it’s carrying a wide array of small and large birds — including fresh, frozen, organic and antibiotic-free birds — to meet the needs of various gathering sizes. Meijer-brand fresh turkeys cost 99 cents per pound, while Butterball fresh turkeys are priced at $1.99 per pound, with a limit of two per customer for all fresh and frozen turkeys.

“Our highest priority is bringing value to our customers this holiday season,” according to Don Sanderson, group vice president of foods at Meijer. “This Thanksgiving will be significant to many of our customers as they return to more ‘normal’ traditions, and we want to make celebrating that return easy by offering an affordable turkey for every gathering.” 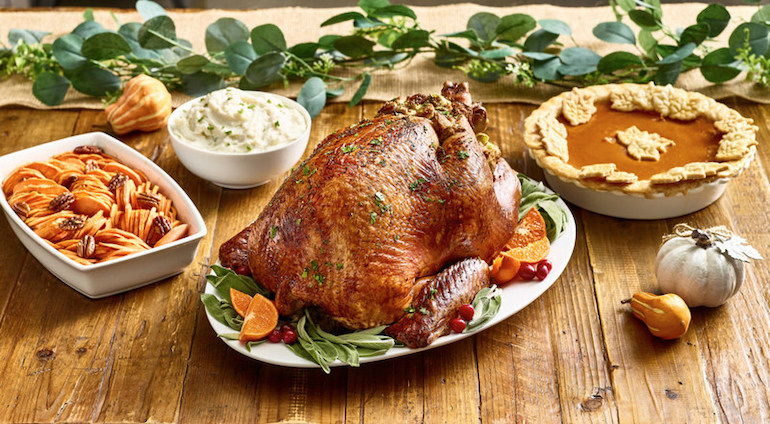 Meijer said it's offering store-brand frozen turkeys for 33 cents per pound through Nov. 27.

Through Thanksgiving eve on Nov. 24, BJ’s Wholesale Club is offering members a free Butterball whole turkey with a coupon and a BJ’s $10 holiday shopping award (redeemable Dec. 2 to 16) when they spend $100 on qualifying food and nonfood items in the same transaction, either in-club or at BJs.com/FreeTurkey.

“This Thanksgiving, we know our members are eager to celebrate the holidays together, so we’re thrilled to offer our members not only a free turkey promotion, but a $10 award as well, to help them with their holiday shopping,” Michael Leary, senior vice president and general merchandise manager for perishables, grocery and beverages at BJ’s. “Whether shopping in-club or from the comfort of their home, members can find everything they need to make the most of their Thanksgiving time with family and friends.”

More consumers thinking ahead this year

In its final round of Thanksgiving-specific weekly data reports, released Friday, CPG market researcher IRI said retail and supplier availability of turkeys is holding up well amid record-breaking demand early in the shopping season.

For the week ended Nov. 7, 2021, IRI estimated that about 50.5 million pounds of whole-bird turkey were sold, up 114% versus a year ago and higher than in any other year for the three weeks prior to the holiday. That also came atop unprecedented whole-bird turkey sales in October, when 30.6 million pounds were sold, up more than 200% from October 2020 and higher than any October on record.

“Sales of whole-bird turkeys — including frozen, fresh and both by-the-pound and pre-weighted options — are strong, and our conversations with retailers and suppliers suggest that they expect to have ample turkey options in-stock in the week leading up to Thanksgiving,” reported Krishnakumar Davey, president of client engagement for IRI. “IRI data continues to show that Thanksgiving turkey sales have been early and elevated nationwide, including record sales for whole-bird turkeys in October and through the first week of November.” 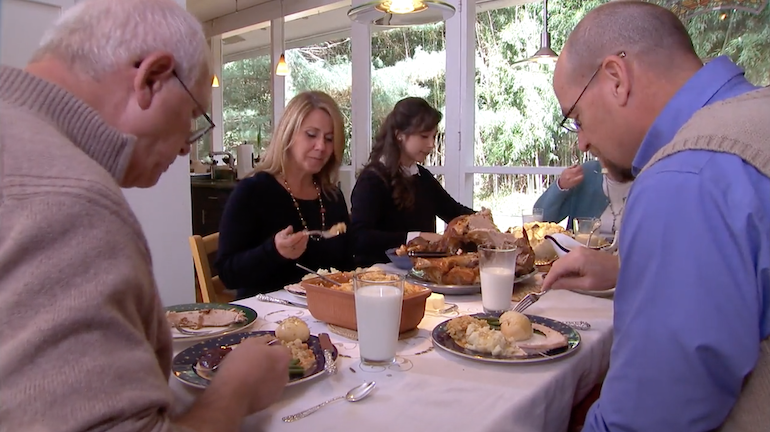 With rising prices and out-of-stocks a concern this year, many Americans shopped well ahead of time for their Thanksgiving meals.

IRI noted that, despite higher prices in other grocery categories, its data indicate that inflation hasn’t impacted whole-bird turkey sales. The average price per pound for whole-bird turkeys in October was down 7 cents from a year earlier. But higher prices in early November reflect a majority of sales without price promotions, which typically come out closer to the Thanksgiving holiday. The researcher said the average price per pound for whole-bird turkey for the week ended Nov. 7 was an average of 6 cents higher than in 2020 and 30 cents higher than in 2019, suggesting that consumers’ earlier start for Thanksgiving meal purchases wasn’t aligned with retailers’ promotional pricing.

In a survey last week by consumer data specialist Numerator, 38% of respondents said inflation is causing them to shop for Thanksgiving earlier than usual, as well as nudging them to switch to lower priced brands (37%) or shop at multiple retailers to find the best prices (36%). Yet widespread news of ongoing snarls in the food supply chain also has fostered earlier Thanksgiving shopping. For example, a late October/early November poll by Inmar Intelligence found that 80% of consumers are concerned by the turkey supply in stores.

Similarly, a Shopkick survey of over 6,500 Americans in the same time period revealed that 25% plan to have all of their Thanksgiving meal shopping done three weeks ahead of the holiday, with the main reasons being to avoid product shortages (63%) and last-minute price increases (51%). At the time, 23% of shoppers reported already experiencing shortages on traditional Thanksgiving items like pumpkin puree, stuffing, cranberry sauce, and other canned goods (63%), meat (52%), frozen food (39%), dairy products (35%) and fresh ingredients (34%).

Meanwhile, 74% of consumers plan to change their Thanksgiving grocery shopping behavior because of rising prices, and 73% expect to be impacted by product shortages, according to KPMG’s Thanksgiving and winter holiday survey, released last week. In response to higher prices or products not being available, respondents said they will shop earlier, go to other retailers, reduce their holiday menu or buy online.

“Consumers are clearly voicing their intent to be responsive to inflationary price increases including shopping around instead of making fewer trips which was the trend in the prior year,” explained Matt Kramer, U.S. consumer and retail sector leader for business consultancy KPMG. “For grocers, decisions on the timing of promotional activity to attract customers while still combating the inflationary environment and supply chain challenges will be a key balancing act as they look to retain their loyal customers.”