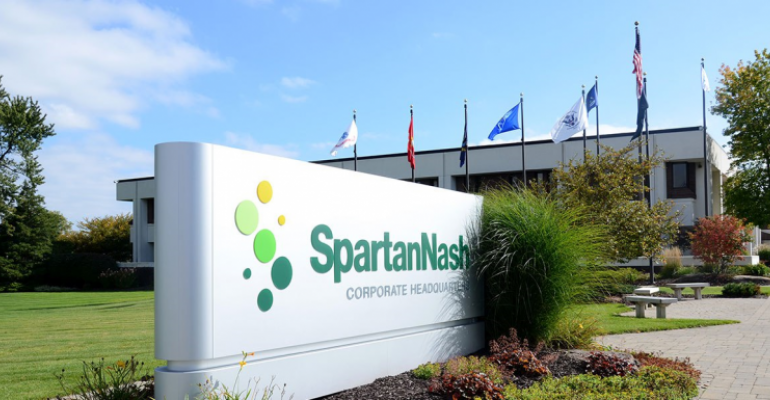 David Staples out as SpartanNash CEO

Chairman Dennis Eidson takes over as interim CEO; Fresh Kitchen to be phased out

Also on Monday, SpartanNash said it plans to cease its Fresh Kitchen fresh food processing business, which has been plagued with operational issues since being purchased as part of the Caito Foods Service acquisition in January 2017.

Grand Rapids, Mich.-based SpartanNash said it has accepted the resignation of Staples, who also is stepping down from the board of directors. Eidson takes the reins as interim CEO effective immediately. He has served as chairman since June 2016 and was SpartanNash’s CEO from October 2008 to May 2017.

“The board remains confident in the company’s strategic direction and its ability to generate top-line growth. However, execution has fallen short of our expectations, and we believe that now is the time for a leadership change. I want to thank Dennis for returning to the leadership position to guide the Company’s efforts in revitalizing performance and maximizing long-term shareholder value,” Lead Independent Director Douglas Hacker said in a statement. 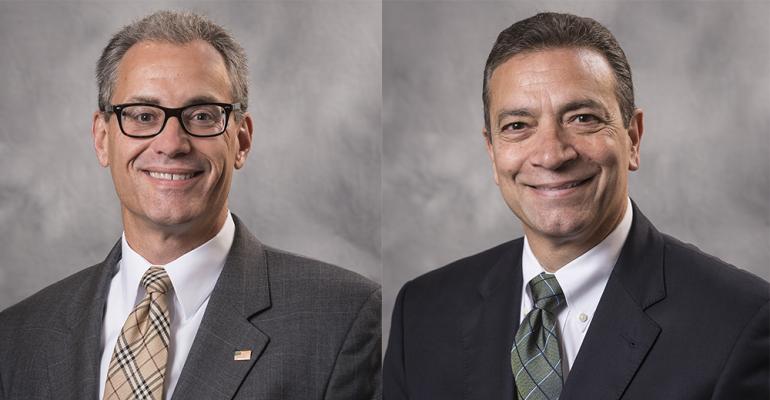 David Staples (left) is leaving SpartanNash, with Dennis Eidson (right) taking over as both interim CEO and chairman.

Eidson will serve as both interim CEO and chairman “until the next CEO is identified,” according to SpartanNash. He has been at the company for 16 years, including as president (2007 to 2016), chief operating officer (2007 to 2008) and executive vice president of marketing and merchandising (2003 to 2007) before becoming CEO.

“I am confident in the strength of our platform and look forward to working with our talented team to deliver improved performance,” Eidson said. “Our focus will be on enhancing our distribution business, driving operational execution and organizational development while positioning SpartanNash to achieve long-term profitable growth and improved value for shareholders.”

Staples had succeeded Eidson as CEO in May 2016 upon his retirement. In August 2015, Staples added the title of president after being appointed COO earlier that year. He previously served as chief financial offer for 16 years.

“On behalf of the board, I also want to thank Dave for his contributions to SpartanNash throughout his tenure,” Hacker commented. “Since joining the company in 2000, Dave has presided over numerous successful business initiatives and has been instrumental in driving SpartanNash’s growth. We wish him well in the future.”

The CEO ouster comes several months after SpartanNash warned about weak first-quarter net income and cut its earnings guidance, pointing to supply chain and operational challenges — including at Fresh Kitchen — and a recall of pre-cut melons at its Caito subsidiary. That had followed a decline in adjusted earnings for fiscal 2018 that fell short of Wall Street’s projections. Full-year sales gained just 1.3% to $8.06 billion, with food distribution sales offsetting a slim gain in military distribution sales and a decrease in food retail sales.

Plans call for SpartanNash to phase out Fresh Kitchen by the end of the year. Located in Indianapolis, Fresh Kitchen was a new, 118,000-square-foot facility when SpartanNash obtained it in 2017 under the $217.5 million acquisition of Caito. The site processes, cooks and packages fresh protein-based foods and complete meals.

SpartanNash said it’s exiting the Fresh Kitchen operations “to improve operating earnings and EBITDA results within the food distribution segment” and sharpen its focus on Caito’s core produce distribution and fresh-cut operations. With the phaseout of Fresh Kitchen, the company expects a negative impact of about $20 million on annual net sales.

“To provide transparency, we have elected to preview our second-quarter financial results, as well as our current outlook for the balance of the year,” Eidson added.

In preliminary results for the second quarter ended July 13, SpartanNash expects a loss from continuing operations of $6.8 million, or a loss of 19 cents per share, and adjusted earnings from continuing operations of $12.2 million, 34 cents per share. Adjusted EBITDA (earnings before interest, taxes, appreciation and amortization) is pegged at $44.3 million. The company also expects $14 million in asset impairment costs from the changes in Caito’s fresh operations. SpartanNash is scheduled to report second-quarter results on Wednesday.

For the full 2019 fiscal year, SpartanNash projects reported earnings per share (EPS) from continuing operations of 21 cents to 47 cents, down from its previous forecast of 70 cents to $1.04. The company lowered its top-end guidance for adjusted EPS (continuing operations), now estimated at $1.20 to $1.35, compared with $1.20 to $1.50 previously. SpartanNash’s net sales growth projection remains in the mid-single digits, while the outlook for adjusted EBITDA was trimmed to between $183 million and $195 million from the earlier range of $190 million to $205 million. The forecast reflects projected losses and disposition expenses of $3.7 million to $4.5 million from the exit of the Fresh Kitchen operations.

Analysts, on average, now forecast SpartanNash’s second-quarter adjusted EPS at 34 cents, with estimates ranging from 30 cents to 40 cents, according to Refinitiv/Thomson Reuters. Projections for full-year adjusted EPS run from $1.16 to $1.44, with a consensus estimate of $1.28.

“The resignation of CEO Staples and exit of Fresh Kitchen are positive moves that will hopefully ignite fresh ideas among leadership on how to better execute strategic initiatives, grow the top line and improve results,” Jefferies analyst Christopher Mandeville wrote in a research note late Monday. “Change takes time, and the business needs to show clear signs of stabilization before sentiment improves.”