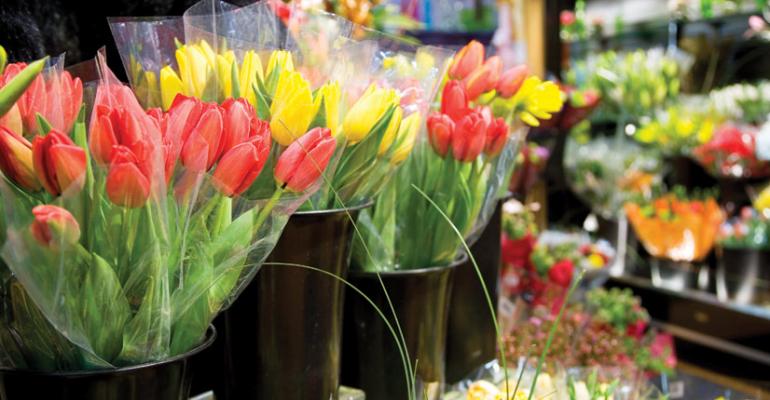 Consumers know they can find locally grown apples, peas and tomatoes at their neighborhood supermarket — but what about mums, roses and petunias?

Retailers have increased their selection of homegrown flowers in recent years, and they’re keen on letting customers know. At Highland Park Market in Farmington, Conn., store manager Brian Gibbons places Connecticut-grown plants and flowers outside his store during the spring and summertime. Depending on the month, shoppers can find annuals from Cromwell, asters from Cheshire, or an array of colorful hanging baskets grown in nearby Manchester.

“People around here want to support local farmers, and that’s not just in fruits and vegetables but in plants and flowers as well,” Gibbons said.

This represents a shift for an industry that imports 80% of the flowers it sells. For years retailers have relied on floral suppliers in Ecuador and Colombia, which have been able to reliably deliver flowers on a mass scale. But the success of the local food movement combined with a growing demand for transparency in the floral department has driven supermarkets to play up their selection of locally grown flowers and plants.

Like Highland Park Market, Kowalski’s Markets, Woodbury, Minn., promotes its selection of flowers grown in-state through store signage and featuring growers on the company website. A top seller is Len Busch Roses from the town of Plymouth.

“A large percentage of what we sell is Minnesota grown, and we do a lot to promote those selections,” said Gary Paone, floral director for Kowalski’s.

Origin-based marketing has proven successful for growers and retailers across the country. The California Cut Flower Commission, a trade group that represents state growers, offers “California Grown” signage and store displays for retailers. Research conducted by the group shows 74% of consumers say they don’t know where the flowers they buy come from, but that given the choice 58% of them choose California Grown.

“We’ve really been able to win that purchasing decision by having a local appeal,” said CEO Kasey Cronquist. “We’re able to compete with imported product in ways we haven’t been able to in the past.”

Cronquist said he’s noticed more supermarkets hosting meet-the-farmer events in their stores. A Safeway in Danville, Calif., recently invited a grower to come into the store and chat with customers.

“Something like that was unheard of until recently,” Cronquist said.

Newport Avenue Market in Bend, Ore., held a similar event this year that introduced shoppers to a unique group of growers. The store partners with a local high school’s special education department, whose students grow basil and hanging baskets that the company sells.

“The kids came into the store and had a great time,” said Lauren Johnson, COO at Newport Avenue Market. “The hanging baskets were a big success, and we’re hoping to source potted plants from them starting this fall.”