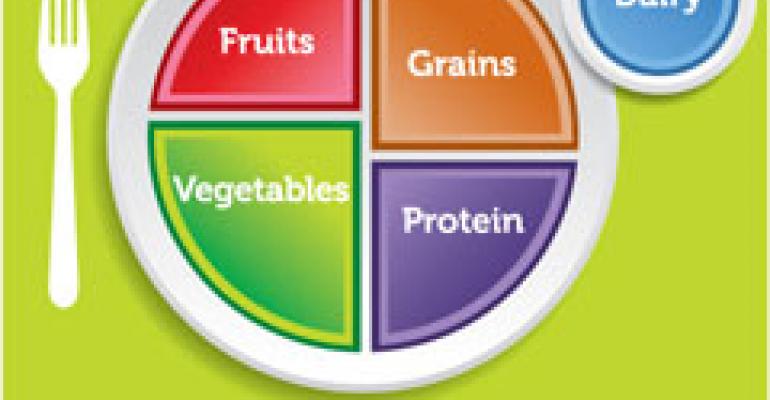 Last month, First Lady Michelle Obama introduced the U.S. Department of Agriculture's new MyPlate icon, which is meant to help translate the department's dietary guidelines into a simple visual aid. The new plate-shaped symbol has been met with general acclaim by U.S. dietitians, who say it's much more intuitive than the Food Guide Pyramid and MyPyramid.gov programs that it has replaced. I think the

Last month, First Lady Michelle Obama introduced the U.S. Department of Agriculture's new MyPlate icon, which is meant to help translate the department's dietary guidelines into a simple visual aid. The new plate-shaped symbol has been met with general acclaim by U.S. dietitians, who say it's much more intuitive than the Food Guide Pyramid and MyPyramid.gov programs that it has replaced.

“I think the [Food Guide] Pyramid was not relatable to a meal like the plate is. We eat off of a plate, and we all know what a plate is,” said Kim Kirchherr, a corporate dietitian for Supervalu who works with the company's Jewel-Osco division.

The Food Guide Pyramid worked best when dietitians had an opportunity to explain it to a patient or customer, Kirchherr said. But, many outpatient dietitians and many health organizations have been using plate icons as visual teaching tools for years.

The plate symbol helps simplify the healthy-eating message, she explained. “Because, in today's world with Twitter and Facebook and such short sound bites, it needs to be something quick and easy.”

Kirchherr pointed out that the new ChooseMyPlate.gov website, which was launched with the MyPlate icon, offers many in-depth resources, and she is currently using social media tools to highlight these resources for Jewel-Osco customers. Visitors to the company's Facebook page will find links to MyPlate.gov's “Ten Tips Nutrition Education Series,” for example. One recent entry, “Smart Shopping for Veggies and Fruits” advises readers to buy in-season produce to save money, to shop frequently for small amounts of produce in order to avoid spoilage, and to “plan and cook smart” by adding leftover, ripe vegetables to casseroles or soups, among other suggestions.

In other Facebook posts, Kirchherr might link to an informational, food-group specific page on ChooseMyPlate.gov, and then list current Jewel-Osco specials on products from that food group.

“We will continue to pepper those links on our Facebook page … so it's easier for people to navigate and start visiting the new website,” Kirchherr said. “That's the thing about the icon; it needs to be quick and understandable on its own, but absolutely each of those [website] sections has so much great information.”

At Chandler, Ariz.-based Bashas', registered dietitian Barbara Ruhs said that she is still trying to decide whether MyPlate will be a good fit for her educational programs, but she praised some of the messaging that the MyPlate campaign is currently promoting.

“The messages that are attached to all the PR for the new icon are good,” Ruhs said. “Enjoy your food but eat less, avoid oversize portions, make half your plate fruits and vegetables, choose low-fat milk, make at least half your grains whole grains, compare sodium in foods like soup — I think those messages are very simple, and those are probably more a part of my everyday educational artillery.”

When details of the new MyPlate program were announced, Ruhs was working on July promotions focused on eating less salt by using the Dietary Approaches to Stop Hypertension diet. Since the DASH diet already focuses on eating more fruits and vegetables, whole grains, fish, lean meats and low-fat dairy, and since the MyPlate symbol was a hot topic in the news, Ruhs saw an opportunity to pair the two, explaining to shoppers how get started with DASH using MyPlate.

“With any sort of dietary recommendation, it can be a starting point,” Ruhs said.

All of the dietitians contacted for this story agreed that shoppers with chronic illnesses, such as diabetes, celiac disease or hypertension, would still require more specific, refined advice. But, the icon can be a useful tool to explain basic healthy eating habits to a broad audience.

And, it can help supplement existing educational efforts. Greenville, S.C.-based Bi-Lo recently announced that it had begun using MyPlate to enhance its new “thrive!” nutrition tag program. Introduced three months ago, the in-store nutrition tags highlight healthy aspects of foods with designations including “heart-healthy,” “whole grain,” “a good source of fiber” or “low in sodium.” Shortly after the launch of MyPlate, the company said that it would introduce three new labels to identify good-for-you meat and seafood items with “lean,” “extra lean” and “omega-3” designations.

“It's really a natural fit,” said Monica Amburn, Bi-Lo's registered dietitian. “We had developed the shelf tag program before this came out, and we were adding on to the program to include more information on meat and seafood: what's a lean food, which type of fish has more omega-3 fatty acids than others. … It's a perfect tie-in to help people choose the lean proteins that fill up one quarter of their plate with the MyPlate system.”

Bi-Lo will promote the program with in-store signage featuring the MyPlate icon in every department of its stores, including produce, meat, seafood, dairy and pharmacy departments.

“It's going to be everywhere, you're not going to be able to miss it,” Amburn said. “We're showing people how they can build a better plate, using our nutritional tags to help pick items that are going to be lighter and healthier.”

Of course, the icon is not without limitations. During a recent Twitter party hosted by the Produce for Better Health Foundation to discuss the implications of the new program, several registered dietitians noted that the icon won't resemble many common meals.

“One of the things we saw mentioned over and over again was that it's difficult to match up a plate that includes mixed dishes like a stir fry that has rice, meat and vegetables all together in one dish,” said Jill Le Brasseur, communications specialist for PBH. “How do you match that up to meet the MyPlate example?”

So, PBH is working to prepare a series of photos that will soon be available to illustrate what these types of dishes will look like when made to MyPlate specifications.

And, the MyPlate icon could soon gain even more public visibility. During a recent Produce Marketing Association meeting in Washington, Michael Hollister, senior vice president of sales and marketing for Driscoll's, presented a great idea to a group of government officials. Why not print the MyPlate icon on Electronic Benefit Transfer cards, reminding beneficiaries to eat healthy and fill their plates half full with fruits and vegetables?

“You could see that Deputy Secretary [of Agriculture Kathleen] Merrigan and her staff thought that was a good idea,” Bryan Silbermann, president and chief executive officer of PMA, said during a press conference last week.

“Within three hours of Mike suggesting that, we got feedback from the USDA Secretary's office saying ‘we've already directed the Food and Nutrition staff at the USDA to look at the viability of doing this, and making this recommendation to the states,’ which are actually the ones that issue the cards.”