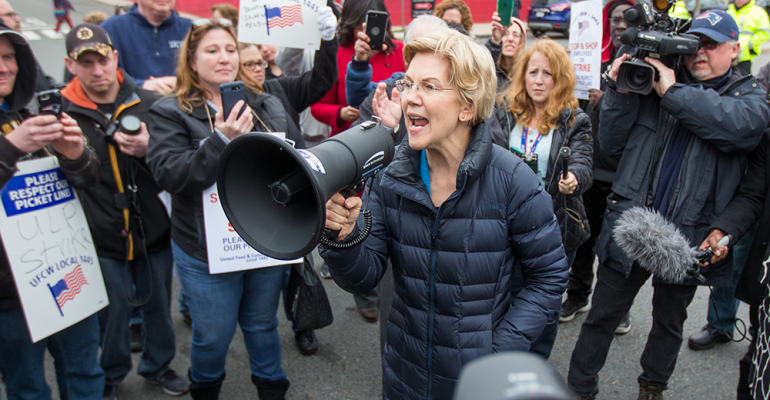 Supermarkets face off with political candidates

The symbolic message behind the recent protests

(Of course, they’re all Democratic presidential candidates, too.)

“I think in a lot of ways supermarkets have become very emblematic of income disparity,” said Doug Forand, a senior partner at Red Horse Strategies, a progressive political consulting and campaign firm.

Supermarkets, in some ways, are even more indicative of this disparity than fast food restaurants.

“A lot of people did have their first job in fast food [as a teenager],” said Forand.

“People always defer to what they know in their own lives,” he said. “Most voters have a sense that supermarket workers outside of management level are pretty low paid.”

“It’s an attack on the entry-level business model across the retail, restaurant, grocery and hospitality sector because the labor community and their affiliated activists believe that those industries carry much of the responsibility for wage disparity, gender inequality, lack of benefits and a host of other issues,” wrote Joe Kefauver, managing partner, Align Public Strategies, a public affairs firm, and frequent contributor to Nation’s Restaurant News, in an email.

There’s a long history of politicians taking a stance on food workers’ rights, but Warren started it this political season when she joined striking Stop & Shop workers in Somerville, Mass. with doughnuts in April.

“My message to Stop & Shop is just pay these folks a fair wage, their health care benefits and give them a shot at retirement. That’s all these workers are looking for, and I think we should all stand in solidarity with the workers,” she said in a video shot by the Boston Herald

While @StopandShop's parent company made $2 billion in profits and got a tax cut from the #GOPTaxScam, @UFCW workers were getting squeezed by low wages and lousy benefits. We’re not gonna put up with it. #UnionStrong. pic.twitter.com/iyDxiyqI0F

Biden, not yet an official candidate for president at the time, joined a week later at a Dorchester Stop & Shop location. Buttigieg (who worked on energy and grocery pricing for McKinsey & Co. before he became Mayor Pete) showed up at a Malden, Mass. location. And Klobuchar hit a Somerville location.

I stand in solidarity with the Stop & Shop workers who are asking for fair wages and compensation. Stopped by the Somerville, Massachusetts picket line today to lend my support @UFCW pic.twitter.com/47sz58uR2K

Sanders waded back into food workers’ rights this month when he urged the Walmart Board to pay workers more during the company’s annual shareholders’ meeting.

Large national chains like Walmart are important to these candidates symbolically, said Forand. The candidates wouldn’t focus on a small chain that has little name recognition outside of the region. Additionally, small, regional chains tend to have greater customer loyalty.

During his address to multinational retailer, Sanders called on the Walmart to pay $15 an hour, a rallying cry for many Democratic politicians.

“Walmart is the largest private employer in America and is owned by the Walton family, the wealthiest family in the United States,” Sanders said. “And yet despite the incredible wealth of its owner, Walmart pays many of its employees starvation wages.”

The way Walmart handled the Sanders’ address should be an example for other brands, according to Kefauver.

“The company not only allowed Sen. Sanders a very public stage, they strategically utilized their CEO to thoughtfully and respectfully counter his arguments,” Kefauver wrote.

“It gave their CEO another opportunity to renew his call for some undetermined increase in the federal minimum wage. At the end of the day, the Senator got his platform. But Walmart got an equal platform to thoughtfully push back without compromising their principles or policies, earning very balanced media coverage.”