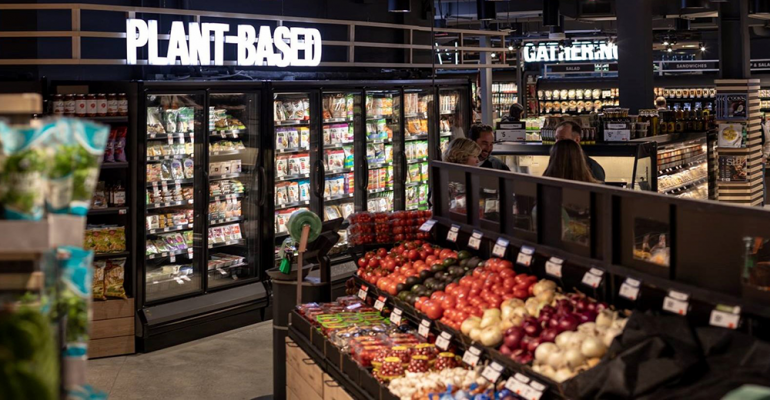 “Top U.S. retailers are ensuring that all Americans have access to delicious and affordable plant-based meat, eggs and dairy,” GFI Executive Director Bruce Friedrich said in a statement. “We are reaching a clear tipping point, and no retailer wants to lose out to competitors with better plant-based strategies.” 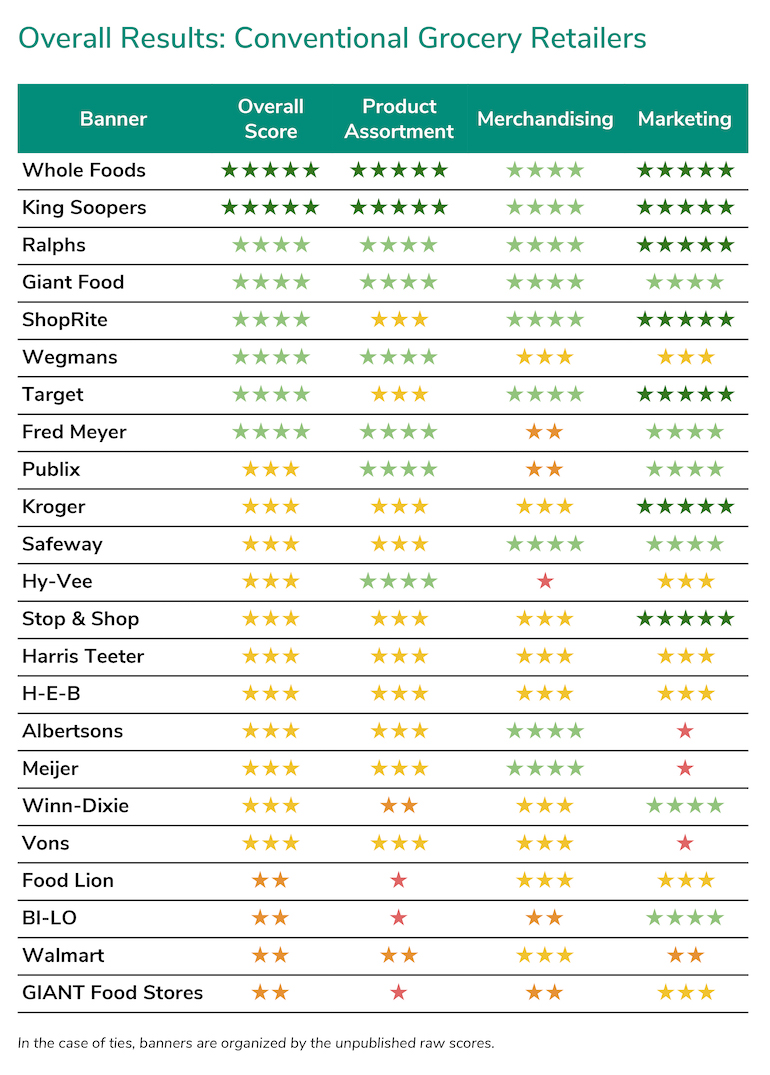 Whole Foods and King Soopers, respectively, offer 360 and 410 plant-based food items on shelves, approximately 50% more than other top retailers, who offer an average of 270 products, GFI said, adding that Whole Foods and King Soopers also offer expansive store-brand lines and a wide variety of plant-protein products in prepared food settings. Wegmans was the top performer in the number of plant-based products on-shelf, with 530 items, including twice the number of plant-based meat products and four times the plant-based cheese products versus the other retailers.

GFI named Whole Foods as offering the best overall plant-based product assortment, including at least one product from each category plus an extensive private-label lineup and foodservice selection. In the latter segment, GFI said Whole Foods provides plant-based meat in three times as many prepared food settings as other top retailers.

“Whole Foods Market has long been a champion of plant-based eating,” stated Jeff Turnas, senior vice president of global culinary procurement and operations at Whole Foods. “We feature a wide variety of alternative protein options across our store, including high-quality, chef-inspired vegan and vegetarian options in our prepared foods department, which includes our Chef’s Case, salad bar, hot bar and a variety of convenient grab-and-go items.”

King Soopers, part of The Kroger Co., was recognized by GFI for the best plant-based private-label assortment, with at least 38 store-brand plant-based meat and dairy products, the most among the top retailers. On average, the top 15 retailers offer 15 plant-based store-brand items.

“Kroger anticipates interest in plant-based products to continue to grow in 2020, with the category being one of the key drivers of our natural and organic sales,” according to Joe Grieshaber, senior vice president of merchandising for Kroger. 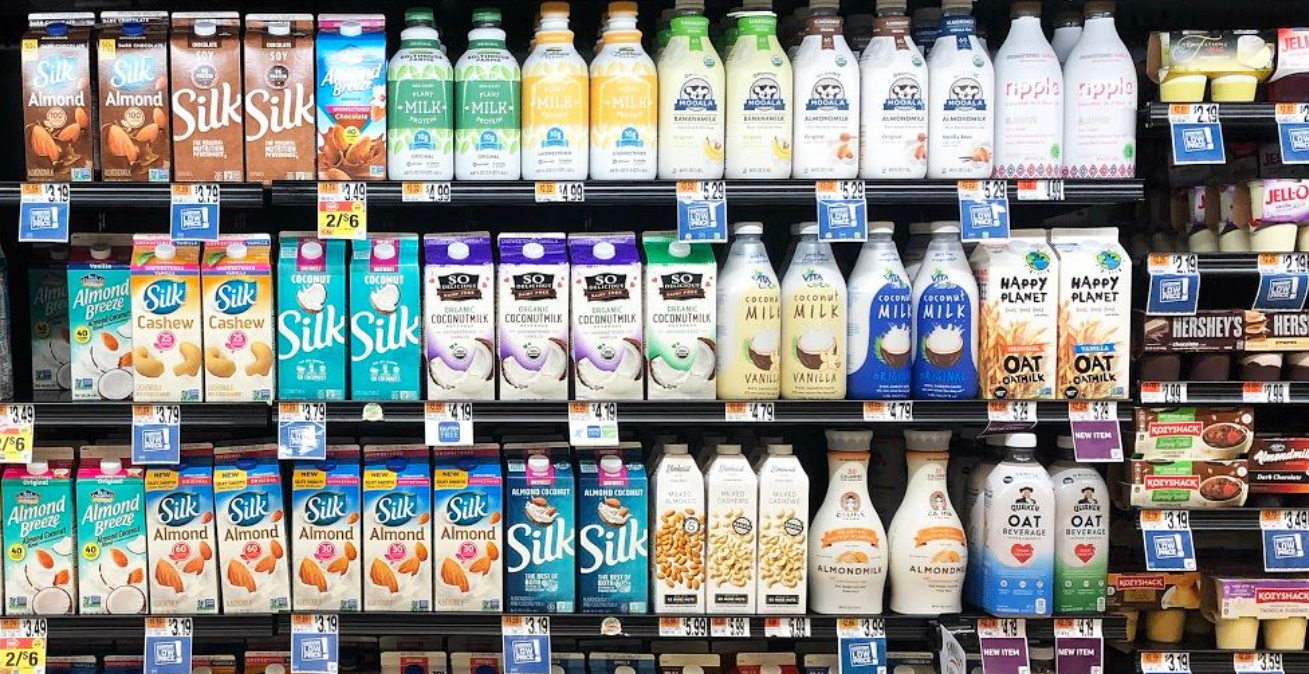 Among the top 15 retailers, the leading assortments in plant-based milk products showcased 70 to 90 items, GFI said.

Chains give plant-based foods a spotlight

“Giant Food’s plant-based strategy stands out for its integrated or integrated-segregated merchandising of product sets with corresponding animal-based sets, as well as prominent aisle signage and shelf tags that use inclusive ‘plant-based’ language,” GFI said in its study, adding that the chain shelved multiple plant-based products alongside their animal-based counterparts in 10 of 11 product categories.

Both Giant and King Soopers rated at four stars in plant-based merchandising, as did Target, Albertsons, Meijer, Whole Foods, Ralphs, ShopRite and Safeway.

In merchandising, 91% of the top 15 retailers placed plant-based products alongside their conventional counterparts in at least two categories, and 65% offered at least one plant-based meat product in the meat aisle, GFI noted. Also, 57% of retailers deployed aisle signs for plant-based refrigerated or frozen meat, and the same percentage used shelf tags or icons to identify plant-based items in at least one category.

What’s more, 57% of the retailers spotlighted plant-based products in endcaps, displays or product sampling, while the same percentage included plant-based offerings in their wellness and nutrition materials. And to appeal to a broader audience, 65% of retailers used “plant-based” or similar terms in place of “vegan” or “vegetarian.” GFI recognized The Kroger Co. for its “Live Naturally” magazine, which showcases plant-based products as alternatives to animal-based foods, and Whole Foods for social media content, which regularly features plant-based items.

GFI said some of the top retailers are “doubling down” on their own plant-based product offerings this year, fueled by rising demand among mainstream consumers. However, the report pointed that that lockdowns during the coronavirus pandemic also have spurred demand for plant-based foods.

“We’ve seen significant increases across our plant-based offerings since the early stages of COVID-19,” Dan Epley, vice president of grocery at Whole Foods, said in a statement. “Our teams continue to work hard to maintain our leadership across these market segments during these unprecedented times.”

Kroger will launch at least four new plant-based product types in the second and third quarters, and Target aims to more than double its private-brand plant-based assortment in 2020, GFI reported.

According to GFI, analysts project the plant-based food market to grow 28% annually, reaching $85 billion in 2030.

“Traditional meat eaters and flexitarians are embracing plant-based products, which means it is critical for retailers to employ plant-based strategies that attract the mainstream consumer,” observed Caroline Bushnell, associate director of corporate engagement at GFI. “Plant-based eating is no longer niche. Retailers are leaving money on the table when they isolate plant-based sets in hard-to-find sections or use exclusive category language like ‘vegetarian.’”