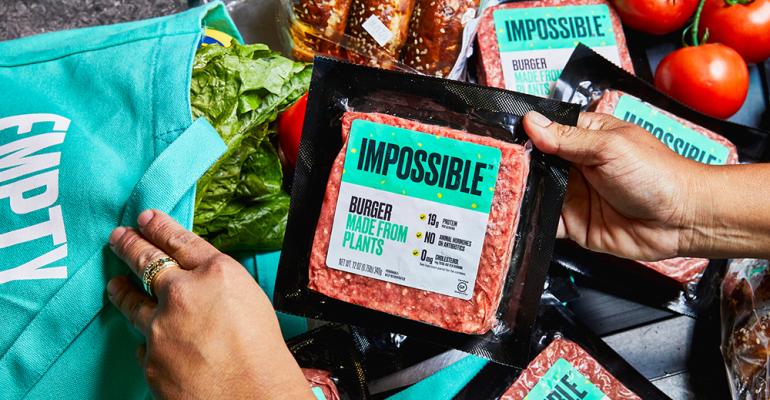 Plant-based food company Impossible Foods is accelerating its retail expansion this week with the rollout of its flagship Impossible Burger at more than 1,700 grocery stores nationwide owned by The Kroger Co., America’s largest grocery retailer.

The rollout of Impossible Burger at Kroger represents an 18-fold increase in Impossible Foods’ retail footprint so far in 2020. The company’s plant-based meat alternative is currently on shelves in about 2,700 U.S. grocery stores and through select online ordering systems, including

In addition to Kroger stores, Impossible Burger is also available at all Albertsons-owned stores in California and Nevada, including Albertsons, Pavilions, Safeway and Vons; all Jewel-Osco stores in the greater Chicago area and portions of eastern Iowa and northwest Indiana; all Wegmans stores along the Eastern seaboard; all Gelson’s Markets in Southern California; and Fairway Markets in the New York City region.

“Kroger’s new partnership with Impossible Foods is one more way we are providing our customers with convenient access to popular fresh plant-based meats,” said Joe Grieshaber, Kroger’s senior vice president of merchandising. “Plant-based food remains one of the fastest-growing categories at Kroger. We’re excited to continue growing our selection, especially as more customers than ever are purchasing meat products made from plants.”

“The launch of Impossible Burger at Kroger grocery stores nationwide signals our intention to make Impossible Burger available everywhere America shops — at brick-and-mortar retailers and their increasingly popular online ordering and delivery services,” said Impossible Foods’ president Dennis Woodside. “Our existing retail partners have achieved record sales of Impossible Burger in recent weeks. We expect our retail footprint to expand more than 50-fold in 2020, and we are moving as quickly as possible to expand with additional outlets and in more retail channels.”

Those channels include independent retailers, Woodside said during an online press conference on Tuesday. By the end of the year, he expects Impossible Burgers to be broadly available at retail and added that independent retailers would be a big part of that expansion.

Impossible Burger made its retail debut in September 2019, at all 27 outlets of Gelson’s Markets in Southern California. That was quickly followed later that month by rollouts at East Coast grocery favorites Wegmans and Fairway Market.

The Cheetah campaign is the first of its kind for Impossible Foods, in addition to selling its product directly to consumers through restaurants and grocery stores. Impossible Foods is also testing direct-to-consumer demand, but the company is not providing additional details at this time.

“We want to work with innovative, entrepreneurial partners that quickly respond to consumer changes — including the fact that more and more Americans are cooking and eating at home,” said Woodside. “At the same time, we know that some behavior changes will persist well beyond the current pandemic — including a growing reliance on food delivery and online purchases.”