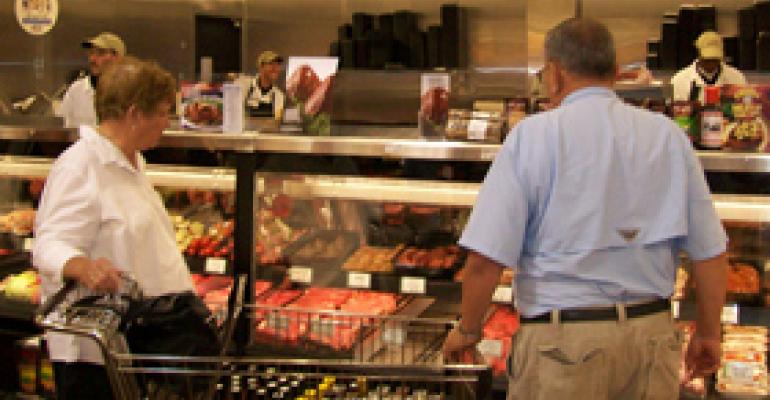 “We introduced Tall Grass Beef, and went through a very lengthy presentation to all our meat managers and gave all our associates brochures so they could read up on the line, and then we quizzed them,” said Kevin Kelly, meat and seafood director for the eight-unit independent based here.

Then, getting customers to try the new line was next. “We sampled the product a lot and when we sample, we sample big,” Kelly said. “When we launched Tall Grass, we gave everyone a whole slider. We don’t cook a burger and then cut it up into 20 little pieces for sampling. When we sample our no-nitrates-added Angus beef franks, we give customers a whole hot dog. People remember those things.”

People remember Sendik’s, too, because there’s always an associate nearby who can answer their questions, Kelly said.

Family-owned Sendik’s has never scrimped on staffing the meat department. All its stores have full-service meat counters running an average of 32 feet, which are staffed from 7 a.m. to 9 p.m. with seven to 24 associates, depending on the store’s traffic level.

Started by the Balistreri family as a fruit and vegetable stand in 1926, Sendik’s evolved into a full-line supermarket that’s long been a favorite in the Milwaukee area. Ownership of the business has stayed in the family all these years. Indeed, in 2001, the fourth generation took over the reins.

Ted, Nick and Patrick Balistreri and their sister, Margaret Harris, bought the business from other family members. Since then, they have successfully expanded to eight stores and have gained statewide recognition. Last year, the Wisconsin Grocers Association named Sendik’s 2009 Grocer of the Year.

For more on meat merchandising from Kelly, as well as interviews with other Beef Backer Award winners at Southern Family Markets and Supervalu, check out “Beef Backers Talk Tactics” in SN’s Feb. 15 issue.