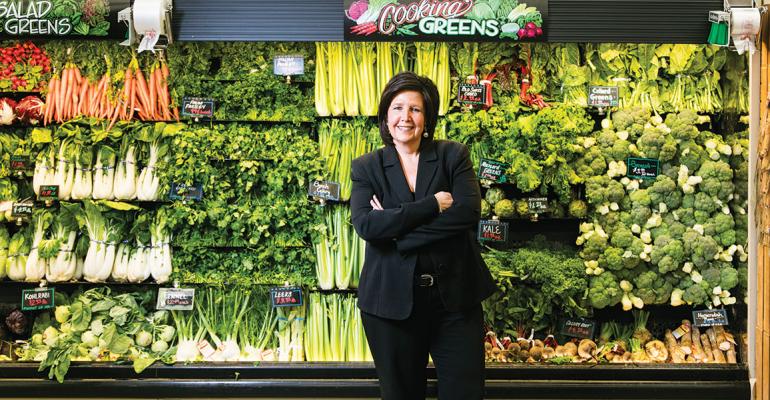 Marketer of the Year is a unifying force at Hy-Vee 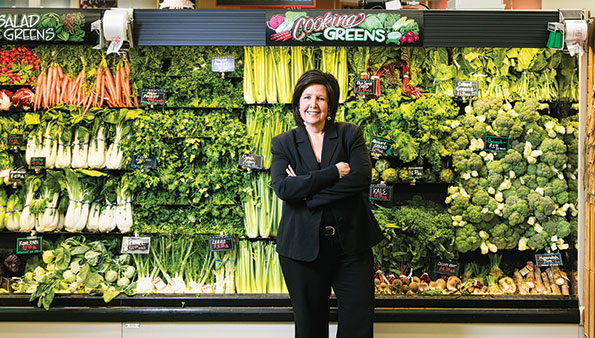 Donna Tweeten, SVP and chief marketing officer of Hy-Vee, is being recognized as SNâ€™s 2016 Marketer of the Year award winner.

Hy-Vee has one of the longest-running ad slogans in corporate marketing — “A helpful smile in every aisle” — and its helpful smile is growing wider every day.

The retailer seeks to convey its message of friendly customer service no matter where consumers interact with the brand, from the aisles to the in-store restaurants to the website to social media. Even as the company increasingly tailors messages to specific customer groups through each of its marketing channels, it works to maintain the overarching attitude of service and friendliness that distinguish the retailer as one of the nation’s foremost regional operators.

Donna Tweeten, SVP and chief marketing officer at the West Des Moines, Iowa-based retailer, leads the team that is responsible for ensuring that this symphony of helpful smiles plays in harmony across media channels and throughout the  organization.

Recognizing the success of Tweeten and her team in positioning Hy-Vee as an experiential, customer-focused retailer through creative communications efforts, both new and traditional, SN has named her as its 2016 Marketer of the Year.

Tweeten has a knack for discovering opportunities to drive sales growth at Hy-Vee, said Randy Edeker, CEO, in an interview with SN. 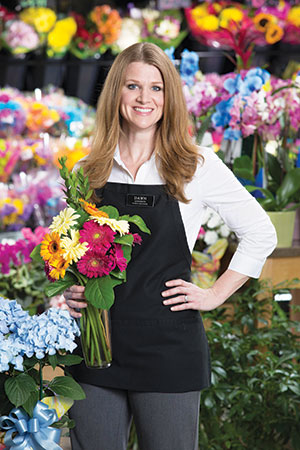 “She’s able to really drill down to the core of each particular situation, and point out the most pertinent thing we need to focus on,” he said. “She’s very, very creative, she brings a fresh perspective and a different slant to old ideas, and I think that’s very, very influential here at Hy-Vee.”

Tweeten stretches Hy-Vee out of its comfort zone, he said, with her willingness to take risks and her creative approach to thinking about the business. Her background in the ad-agency world on behalf of a range of clients has helped her bring a broad perspective to Hy-Vee, he said.

She began working with the retailer in 1993 as part of an outside ad agency, before she brought her skills in-house in 2006. In her two decades-plus of work with Hy-Vee, she has helped it remain on the cutting edge of new media, find new opportunities to drive sales growth, and solidify the “voice” of the brand.

The company’s mission of making peoples’ lives “easier, healthier and happier” — part of the “helpful” component of its ad slogan — is reflected in one way or another in all of the company’s initiatives, from advertising materials to packaging to employee development. It’s a unifying message that is communicated in different ways to different consumer groups.

“Basically we don’t have one-size-fits-all advertising,” Tweeten told SN. “We’ve gone away from casting this great big net to yield as many women age 24-54 as we could. That kind of old-school thinking is just that.

“Our positioning and our media placement approach is much more tailored and much more disciplined, and we’ve gotten much more consistent and disciplined with our brand image with regard to the way our ad materials look and the tone, and the style, and the attitude and overall personality of our voice in the marketplace.” 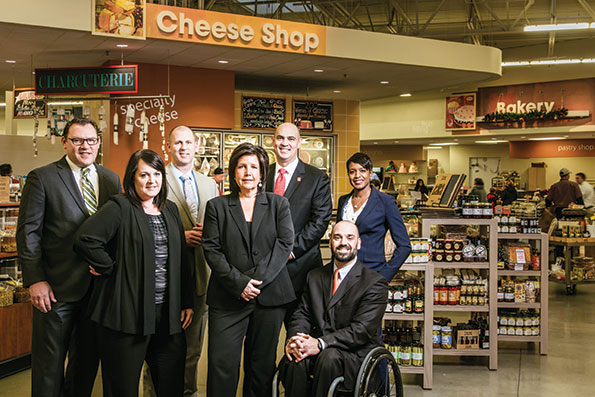 Jon Wendel, EVP and chief merchandising officer — who had been CMO before Tweeten — credits her with pushing the company to expand its marketing to new channels to keep pace with changing consumer media preferences.

Tweeten said she thinks 2016 will see the most significant shift yet among marketers reallocating their ad dollars toward digital media. 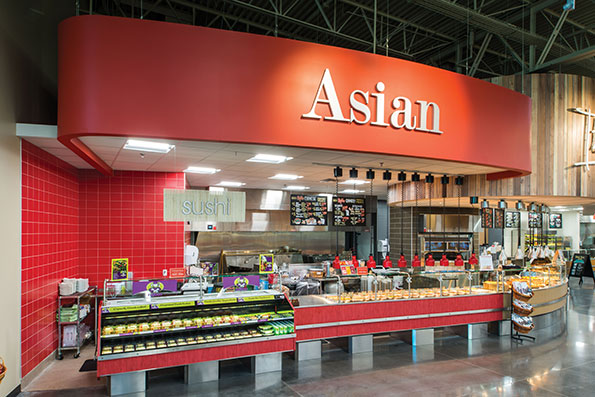 “Millennials are getting older, and they are more and more of what I call our target customer sweet spot,” she said. “And they don’t read the newspaper. Now that they have become a bigger play, it’s forcing our hand to move the messaging to other media, and that’s digital.”

This is a generation that’s “very visual, and is all about sight, sound and motion,” said Tweeten, and not just in terms of the entertainment they watch, but in the way they learn and gather information.

“Because of that, the still picture on paper doesn’t work for them,” she said.

That shift has led Hy-Vee to place a strong emphasis on video in its marketing, including cooking tutorials on its website and social media.

However, with a store base spread across eight Midwestern states, and throughout many rural markets, Hy-Vee’s marketing must appeal not just to the Millennial generation embracing digital media, but also to the aging population that’s a core demographic in its operating area and is still drawn to traditional print advertising.

This requires Hy-Vee to take a balanced approach in which the company tailors its messaging by channel to reach different demographics. While Millennials are often planning dinners at the last minute and looking for easy meal solutions — and finding them on social media — others are still scanning the print circulars for the best deals and planning their meals for a week at a time.

“The states we operate in are some of the highest aging population states in the country,” said Tweeten. “We have to maintain a very strong foothold with that Baby Boomer generation. We have tons of customers who are 60-plus years of age, and we can’t forget to focus on them. They are making lists, and planning their meals.

The company increasingly strives to ensure it is delivering the right message via the right platform to the right audience.

That’s why the online version of Hy-Vee’s circular is different from the print version, and why it offers a digital flyer geared especially toward its Fuel Saver + Perks program members.

“If a customer so chooses to pick out an ad that only has the Fuel Saver + Perks Card, they can choose that online or within our mobile app themselves, and all of those are completely different offers,” said Matt Nannen, VP of advertising and marketing. “We have some great ideas coming up in the future that will completely align our digital strategies to be incredible .”

In addition, the company’s acclaimed Seasons culinary magazine — which circulates almost a million print copies per issue — has recently added a digital version.

Hy-Vee’s marketing has evolved from the time Wendel was the CMO — he was SN’s Marketer of the Year in 2010, reflecting his success in promoting price and value during the economic downturn, when more consumers were looking for the sharpest deals — to become more focused on the service aspects of the brand, said Tweeten.

“During that recession period, the smartest thing we did was spend more money than ever before on marketing, because it then helped catapult us once the recession was over,” she said. “I give Jon tremendous credit for having the guts to do that.” 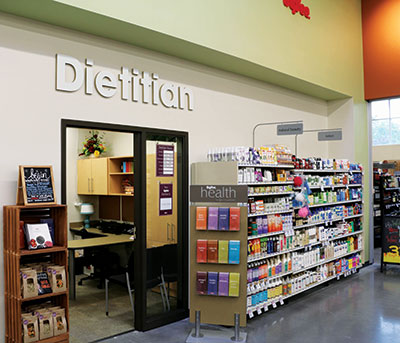 Like Hy-Veeâ€™s marketers, the chainâ€™s dietitians cater to a wide age range of consumers, which include Millennials and shoppers who are 60-plus years of age.

Those years saw Hy-Vee focus on sharp pricing with campaigns like its Red Hot Deals and other efforts promoting private label.

“As a retailer whose brand position is all about service and not about price, you have to be careful when you find yourself  focusing too much on price messaging,” said Tweeten. “But now a stronger economy affords us the luxury of being able to talk more about our service, which is our huge point of difference, and also to really hone in on our culinary expertise versus primarily talking about price points and special events sales.”

Hy-Vee is also able to focus more energy on other initiatives, such as its sustainable seafood program and its One Step program supporting local communities.

Hy-Vee spends about 33% of its marketing on TV broadcast, cable and radio, another 26% on newspaper/print advertising, 20% on digital/social, 11% on sports marketing and miscellaneous/other, 8% on direct and out-of-home marketing, and 2% on in-store marketing.

In 2016, the company is planning its largest decrease ever on newspaper/print advertising, and is applying that money to broadcast and digital/social media. TV spending has ramped up significantly during the last 10 years, more than tripling in that period.

During the past two years, Hy-Vee also has dramatically reduced its in-store/POS marketing, cutting it in half last year and by more than 85% for fiscal year 2016. It has shifted away from in-store, one-off POS campaigns toward more long-term program signage, by department and/or service.

Synergies with the corner office

Tweeten pointed out that Edeker’s marketing background — he was one of her primary contacts in Hy-Vee’s marketing department when she was working at the outside agency — has benefited her as she continues to push the envelope.

She described Edeker’s instinctive approach to the creative process as similar to her own.

“He can see all the numbers and review all the analytics, and still make as good if not better decisions that are driven by his gut,” Tweeten explained. “He’s very intuitive and that plays well for me because I mirror a lot of that behavior. It makes my job easier, because he will give me a long leash.

“It’s refreshing to be able to have a boss that says, ‘Give it a shot, and let’s see if it sticks even though you don’t have every single solitary possible calculation figured out.’”

Edeker says Tweeten’s risk-taking approach helps uncover opportunities the company might have overlooked, such as its year-end Holiday Home Sale, focusing on soft goods, and its series of successful seafood campaigns.

“She’s very good at studying the ebbs and flows of our industry, and knowing where we’re going,” said Edeker. “This is a time of great change in the grocery industry — it seems that every day something changes — and she helps us adapt, helps us keep moving, and helps us keep winning, and that’s what her influence is.”