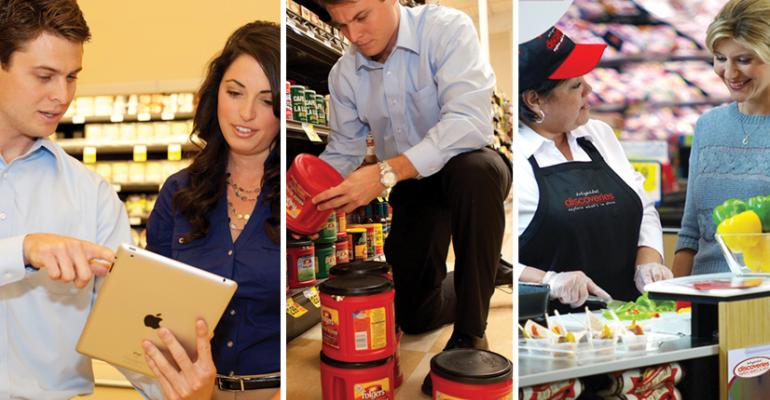 Investments in training, technology and new services, combined with an ongoing trend toward outsourcing by CPG companies, are driving growth among the nation’s leading sales and marketing agencies.

The agencies have become providers of end-to-end solutions for an increasingly broad spectrum of companies, and have expanded their services into new channels as well, including foodservice venues and online retailing.

She said that over the last several years, many CPG companies that had traditionally relied on direct relationships with retailers have turned to outsourcing both their headquarters sales calls and their retail merchandising services.

“The primary drivers for outsourcing have changed,” she explained. “While in the past, it was practiced merely for efficiencies, today the combination of talent, technology and scale we offer enables us to be both a more efficient and more effective way to market.”

Similarly, she added, CPG companies that had already converted to outsourcing some functions to sales and marketing agencies have been awarding more retailer and channel responsibility to outside agencies.

“Manufacturers facing increased competition are realizing they can focus more of their resources on product development and entrust us with what we do best: building and executing insight-based, go-to-market sales and marketing strategies,” Domier said. “We continue to aggressively invest in architecting sophisticated tools and services, both at the macro as well as the account-specific level, in a way that few manufacturers can do on their own.”

Retailers, too are calling on sales and marketing agencies to help differentiate their shopping experience through an array of services, including experiential and digital marketing. Advantage this year launched a centralized in-store event program with Cincinnati-based Kroger, for example.

“We have great optimism based on overall outsourcing trends, and the implications for our service and footprint expansion well beyond our current scope,” Domier said.

Likewise, Joe Crafton, CEO of Plano, Texas-based Crossmark, said many large CPG companies are maintaining only their top 12 or 13 retail accounts as direct relationships, and are outsourcing responsibility for their other retailer customers to sales and marketing agencies.

“I think we are seeing the midsize retailers for the large CPG companies coming back to the sales agencies,” he told SN. “That business is growing nicely.”

He agreed with Domier that sales and marketing agencies have become a more efficient and effective conduit for CPG companies to get their products on the retail shelf.

“I think with very few exceptions, even very large CPG companies are embracing the fact that in most cases sales agencies can do it better and cheaper than they can do it themselves,” he said.

Robert Hill Jr., CEO of Acosta Sales & Marketing, Jacksonville, Fla., noted that investments in technologies and in staffing and training have helped the sales agencies become a better alternative for CPGs.

“The reason we have these opportunities is the quality of our associates at all levels across the organization,” he told SN, adding that Acosta also recently rolled out handheld tablets to its in-store workers. “We have an extremely engaged workforce.”

He noted that growth in outsourcing has spanned a range of functions, from traditional retail execution to headquarters calls to marketing services.

“Some of those things might have previously been done in-house, but there’s an option now to use other folks,” Hill said. “I would say the trends on outsourcing continue to be really good for our industry, so that is why I think the opportunity is really good for our business.”

Among the biggest moves by the major sales and marketing agencies in the past year was the acquisition of a majority stake in Crossmark by investment firm Warburg Pincus, which is allowing Crossmark to pursue more growth opportunities, Crafton explained.

“We identified experiential marketing as a big growth area for us,” Crafton explained. “Experiential marketing means getting the customer involved in your brand at a higher level, which in some cases means being at sporting events, being at parking lots, at festivals, at concerts, wherever people are gathered that fit the demographics that the brands want to reach and they can be reached.

“Those are the type of venues where today’s shopper — especially Millennials — are going to be, rather than camped in front of the TV watching 30-second commercials.”

He noted that Marketing Werks, with around $100 million in annual revenues, brought to Crossmark a large group of CPG and non-CPG clients.

“They do everything from electronics to banking services, IndyCar and telecommunications,” Crafton said.

“We see ourselves as a marketing company, not just a consumer packaged goods company,” he explained. “Some of the best lessons about marketing can be learned from companies like clothing, consumer electronics, financial services and insurance companies. Credit card companies, for example, are very good at experiential marketing.

“We are not afraid to learn from them, and we love to cross-pollinate ideas from other industries.”

“We think by having national model — which is what we’ve had in our core business for the past 15 years — it really gives CPG companies the opportunity and the capability that was not there in foodservice in the past,” Hill of Acosta told SN.

He said Acosta has implemented a new customer relationship management at its foodservice operations, as a well as what he described as a “more disciplined” sales approach.

“The [foodservice sales and marketing agency] industry is like the retail industry was 20 or 25 years ago,” Hill said. “There was limited ability for these companies to invest in talent and training, and so we are very excited about the possibilities for that business.”

He said the experience of rolling up regional retail sales and marketing agencies helped in the integration of the added businesses, as did the leadership at those firms.

“We have extensively experienced foodservice folks leading the business, as well as performing the business day in and day out,” Hill explained. “The transition has been easier because of that. Also we have invested in the right technology solutions that should make people’s jobs easier and more productive.”

“The challenges have been very minimal and are essentially the same as we ran into in the late 1980s when consolidating regional retail agencies,” she said. “It’s about finding the right partners, aligning them on the case for a national go-to-market strategy, and then once everyone is on board, working to integrate operations and HR processes such as benefits, along with melding the organizational cultures. Because we have been down this road before there were few surprises.” 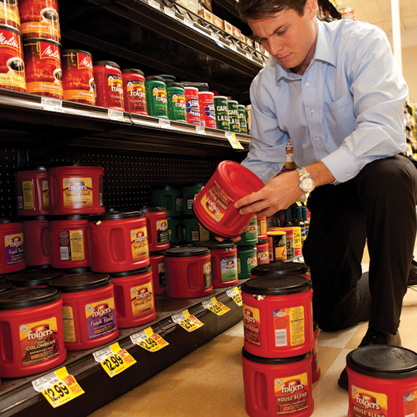 Advantage had a head start on national integration, she pointed out, because of its acquisition of Waypoint, which included seven of the largest regional foodservice sales and marketing agencies. It now has 17 national clients in the space.

Although there have been some similarities in terms of the roll-up, there are some key differences in the strategic focus of foodservice and retail, Domier pointed out.

“The industry, customer, structure and selling proposition is different from retail,” she said. 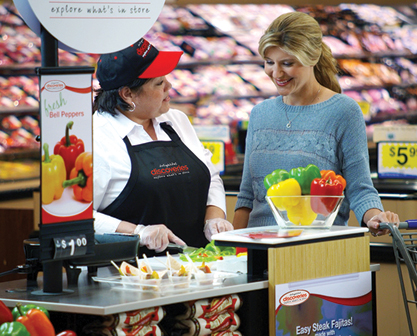 For example, she said, the marketing of product brands is more operator-driven than consumer-driven, since fewer of the brands in foodservice are actually chosen by the end users.

Advantage also has a “very robust” offering in the nonfood area of foodservice, which includes janitorial and sanitation products — the so-called “jan-san” categories, which is an area where Hill said Acosta also sees a lot of opportunities for growth.

In addition, Advantage has also been rolling up fresh-food sales and marketing agencies, and expects to have a national footprint in that space by the end of the year, Domier said.

“The challenges were a little greater on the perishables end, because we didn’t all of a sudden ‘draw an ace’ with seven previously aligned companies ready to go,” Domier explained. “With perishables it was more of a treasure hunt going across country, hunting down the partners we wanted, and then convincing them that nationalism was going to happen and it was in their interest to come on board.”

Hill noted that Acosta is also investing in e-commerce, citing the company’s recent acquisition of Global Sales, an agency that works with online retailers such as Amazon and Drugstore.com.

“I think the challenge for everybody is how do you really win in an e-commerce environment, and what should your strategies be there,” Hill said, noting that Acosta has “brought on a number of folks that have particular expertise” in that channel.

“From a digital standpoint, our challenge collectively in the industry is how do you reach different groups, whether it is Gen Y or Hispanics, what’s going to drive their behavior and how do you reach them in whatever their element might be,” Hill explained.

“The marketplace is challenging, and going through a lot of changes. But overall we are really excited about doing the right things as an integrated sales and marketing organization.”

Crafton said his company is redefining its place in the marketing ecosystem.

“Things are vastly different than they were 25 years ago when I joined the company,” he said, noting that he calls the latest version of the company “Crossmark 4.0”

“Crossmark 1.0 was a single-market food broker; 2.0 was a national sales and merchandising agency; 3.0 was Crossmark’s move into customized solutions — that basically unbundled the full-service agency, we did headquarters work, did project work where that was appropriate, and were full-service,” he explained. “Crossmark 4.0 for us is the recognition that we are really committed to the marketing services business.” 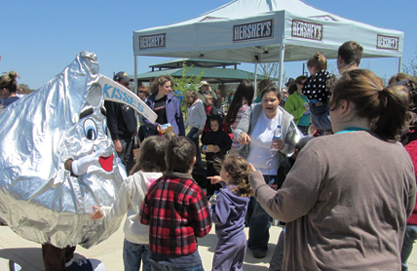 This involves what he described as the “five Ps of marketing” — adding “people” to the traditional Ps of product, price, promotion and placement.

“We like to say there’s a fifth P, and that’s people, which includes retail associates — people on the sales floor that can influence consumers’ decisions,” he said.

“We are redefining ourselves as marketing services, or more appropriately field marketing, because everything we do — including headquarter work — is field marketing.

He likened the changes at Crossmark to a railroad company redefining itself as being in the transportation business.

“It opens up new possibilities,” Crafton said. “For us, the new frontier is redefining ourselves as field marketing.

“It’s created a whole new paradigm about what businesses we want to be in, which ones are complementary and which ones help us become more robust and relevant in the space.”

Just as Crossmark’s acquisition of Marketing Werks is helping it grow its marketing services business, Acosta’s purchase of Mosaic Sales Solutions last year has fueled Acosta’s expansion in that area.

Hill said that business — which he described as “using people as media, in a way” — is doing “extremely well.”

“It’s really given us an end-to-end platform for our clients,” he said. “It’s a model that’s not necessarily been there in the past to that extent.”

He said there could be more opportunities for acquisitions in the future.

“As you look at the challenges CPG companies are having in terms of reaching the right shoppers, I think you will always see us add to our capabilities there,” Hill said.