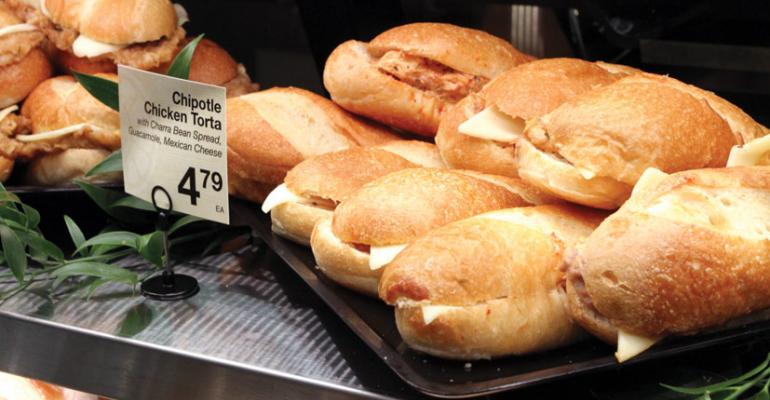 Retailers are bringing their current customers in more frequently &mdash; and attracting new ones &mdash; with unique sandwiches and sandwich programs

However they describe them, retailers are creating unusual sandwiches and sales keep climbing. What’s key is the item can’t be found anywhere else. Not nearby anyway.

To avoid competing with the quick-service restaurant Subway, some retailers have purposefully focused their attention on other types of sandwiches than subs, underscoring attributes such as freshly made, orchestrating attention-grabbing promotions, and concentrating on offering knock-out sandwiches at breakfast time.

So, instead, Lamb is taking on McDonald’s (and anyone else) at breakfast time. “We started awhile ago to offer breakfast sandwiches at two of our stores, and they did catch on. Then, recently, we decided to emphasize their freshness by finishing them off on George Foreman-type grills right in front of the customer.”

He explained that bacon, ham, eggs and omelets are ready on a regular, large grill in the background, but when a customer orders his sandwich, the sandwich is assembled on slices of freshly baked ciabatta and then press-grilled on a small Foreman-type grill close to the customer.

“This works,” Lamb said. “Since we started doing this six months ago, sales started rising and are still going up. People come in for these. They see they’re fresh, and it’s quick.” The breakfast sandwiches’ retail: $3.49 to $4.49.

At Kowalski’s Markets, St. Paul, Minn., Terri Bennis, the chain’s VP of perishable food operations, is another retailer who said Subway is hard to beat. “We have an awesome sub sandwich program, but now we see people trading up,” Bennis said. “We’re encouraging that with a custom sandwich program at one location. There, they have six menu options of specialty sandwiches. That’s new, and it’s doing so well we’ll roll it out to other locations in the next six months to a year.”

“We’re still seeing 15% year-to-date increases every week when we do the numbers.”

Part of that success, Bennis believes, can be attributed to convenience and to interesting condiments. A while back, Kowalski’s food team tried combos of sweet and savory in their panini, “and customers love it,” Bennis said.

“First of all, we use artisan bread, and the highest quality meats and cheeses, and we’ve been pairing them with condiments such as apricot preserves and strawberry-rhubarb preserves.” Those have helped make the program a destination. Speed counts, too. There’s never a long line, but each store can easily sell 200 panini during lunchtime, Bennis said.

Out of the box

Kowalski’s also experiments. Last summer, a romaine wrap — no bread —was stuffed with turkey, bacon and avocado, and became an instant hit.

Even as new twists are debuted, Kowalski’s long-time sub program is still thriving.

Lamb’s wraps subs in plastic wrap with the seam of the sandwich topside, so customers easily see the ingredients.

While some retailers look to make other sandwich programs stand out, Lakeland, Fla.-based Publix Super Markets just nurtures its sub program. Its subs have been its signature for years. Indeed, the program, launched in 1992, has been expanded with variety and hot subs, and has seen continuous growth.

“We have a loyal following. You’ll see folks on social media channels discussing what they miss most when they move away from our operating states. It’s our Publix subs!” said Publix spokeswoman Maria Brous.

Convenience via quick ordering and serving has long been a hallmark of the sub program and the chain is taking measures to make things even easier.

“We’ve launched Publix Deli Online Easy Ordering, which we expect to roll out in 2014,” Brous said. “With this program, customers can order custom subs and sliced meats and cheeses online or via their smartphones for pick-up at the store.”

Publix began piloting the online ordering program in 2012 and has been expanding the program to other locations.

Publix has a panini program and wrap sandwiches, but its subs are what consumers talk about.
“The subs are a point of differentiation,” Brous said.

A Black Forest Ham and Swiss Cheese Pretzel Melt is a destination itself at some of United Supermarkets’ upscale Market Street stores.

“We serve them warm,” said executive chef Chris Wilson at the chain, which has 50-plus units. “More and more people are asking for hot sandwiches from our grill. One of our best sellers is adobo spicy chicken, and another is our Ultimate Ham and Cheese Sandwich made with sweet ham, brown sugar bacon, tomatoes and a smoked gouda spread.” That one has made the list of Best Sandwiches published by the Dallas Morning News.

“We spot a popular basic sandwich and take it over the top,” Wilson said.

Such sandwiches have become a bigger part of United’s prepared foods, Wilson said. And he added that grilled hot sandwiches are overtaking subs in United’s market area.

It’s good to have a standout sandwich, but one retailer, Patrick Ptacek, one of the owners of Ptacek’s IGA in Prescott, Wis., believes it’s just as important to let people know what you have.

Ptacek has long done that with promotions that catch the attention of the community.

The latest hoopla to showcase his signature, store-made bratwurst sandwiches involved a brat sandwich that ran 152 feet long and was grilled in front of the store. A little more than a year ago, Ptacek’s attracted attention with a 52-foot brat sandwich but in September, 100 feet of bratwurst were added and Budweiser sent its Clydesdale horses over to help celebrate the occasion. More than 7,000 people turned up and many bought part of the long brat sandwich. Proceeds totaling $75,000 went to charity, Ptacek said.

Nothing else at Ptacek’s stacks up as well as bratwurst sandwiches for the position of “signature” food.

The beauty of a sandwich program is that it can be easily customized to a retailer’s strengths and to shoppers’ needs.

“But we keep doing things to raise awareness. We had people here for the September event from four states,” Ptacek said. “And we’ve expanded our bratwurst production. We now make 40 varieties. Some examples are cheddar, onion, pineapple, jalapeno. Five years ago, we had just two or three varieties.”
Harry Balzer, chief food industry analyst at Port Washington, N.Y.-based NPD Group, a market research firm, has said previously that sandwiches are the No. 1 food consumed in this country.

For that reason alone, he said, “Why would a retailer not create a unique sandwich? All purveyors are — or should be — interested in the sandwich. People are eating them for breakfast and dinner as well as for lunch.”

Balzer explained that a sandwich is an easy item to make unique.

“It can be done with special condiments, special bread, new combinations of ingredients. People love new things, but remember, they also want it to be fresh, convenient and be sold at a fair price,” Balzer said.
Freshness these days keeps growing in importance, and supermarket industry consultant Brian Salus said the fresh message can be conveyed in a variety of ways. Salus is founder and president, of Salus & Associates, Mathews, Va.

“By having sandwiches being made near the [self-service] case as the store opens sends the fresh message to the consumer and meal seeker, stopping by for a cup of coffee and grabbing a signature sandwich and sides — chips, salads, etc. — to take back to the office or job site to eat at their convenience.”

“For example, Monday could be hot roast beef on fresh bakery roll — fresh baked top round of beef sliced in the sandwich station and piled high with horseradish sauce and bundled sides and beverages. Don’t forget to bundle — your fast-food competitors sure haven’t.”