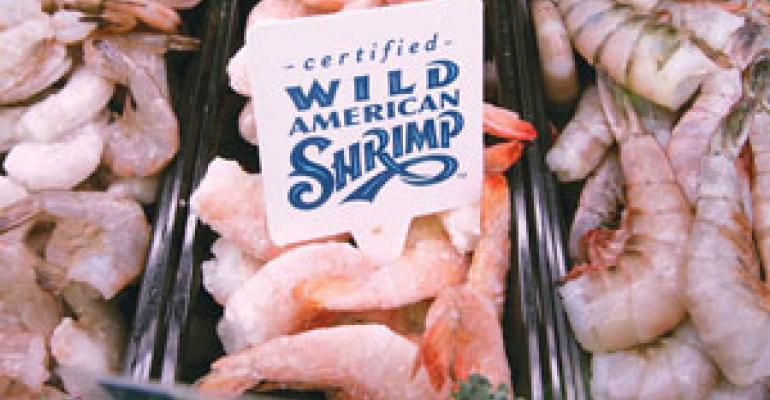 The thought of Christmas and Thanksgiving dinners typically brings to mind turkeys, hams and roasts with plenty of sides. But the winter holidays are also one of the busiest times of the year for seafood departments, and shrimp is no small player. Shellfish sales shrimp in particular enjoy regular spikes during holiday periods ranging from Memorial Day and Fourth of July to Christmas. And many retailers

The thought of Christmas and Thanksgiving dinners typically brings to mind turkeys, hams and roasts with plenty of sides. But the winter holidays are also one of the busiest times of the year for seafood departments, and shrimp is no small player.

Shellfish sales — shrimp in particular — enjoy regular spikes during holiday periods ranging from Memorial Day and Fourth of July to Christmas. And many retailers tend to promote the category during those natural spikes because demand is so evident. However, retailers and industry observers note that heavy discounts may be a counterproductive promotion strategy during this busy time.

“Total shellfish volume has been basically flat in 2007, with dollar sales up about 4%. Shrimp is flat, with dollars up about 1.5%,” noted Steve Lutz, executive vice president of The Perishables Group, a fresh foods research consultancy based in West Dundee, Ill. “So, basically, dollars aren't growing quite as fast for shrimp as they have been with the rest of the category. The biggest chunk of that dollar increase [for the shellfish category] is probably due to rising prices for crabs and scallops.”

One nagging challenge facing the seafood category in general, including shrimp, is that the purchase cycle is long, and the percentage of repeat buyers is low, Lutz noted. What these holiday spikes indicate, he said, is that there are many shoppers who are buying out of tradition or habit during those special times of the year. Whether they're purchasing cooked shrimp rings for holiday entertaining, buying raw shrimp for traditional Christmas dishes, cooking jambalaya each year for a Mardi Gras party or grilling kebabs during summer holidays, it's an annual or semiannual purchase for a large number of shoppers.

“It may be an annual holiday entertaining event or a family tradition, but they don't buy again for a long period of time,” Lutz explained. “So, ideally, the goal [for retailers] would be to have fixed strategies in place for what will be done from a promotion and merchandising standpoint to shorten that purchase cycle and to cause those people that are buying to become repeat buyers.”

Those factors indicate that the best seafood promotions during the holidays should focus on variety and educational efforts, rather than deep discounts, Lutz advised. Big discounts on shrimp and shellfish during the holidays “don't necessarily drive a lot of incremental volume,” he said. “The people who are coming in are going to buy anyway, and all you're doing is taking dollars off the table.”

Variety is certainly the order of the day at Schenectady, N.Y.-based Price Chopper. The home page of the company's website currently informs shoppers that Price Chopper is offering more than 42 varieties of shrimp in its seafood departments this holiday season.

“The popularity of shrimp grows in and around the holiday season, and we do see a significant boost in shrimp sales during this time of the year,” said Mona Golub, vice president of public relations and consumer services at Price Chopper. “In fact, it's the primary driver for the seafood department during the month of December.”

“There's a lot of tradition associated with holiday cooking,” Golub noted. “On the one hand, you've got holiday parties where people are enjoying shrimp cocktail and stuffed shrimp appetizers. But, there's also a great tradition of seafood dinners in areas where there's a strong Italian cultural influence. There are many different ways to prepare shrimp, and different sizes of shrimp are needed for different preparations. And having extensive variety has helped us not only to grow the category, but to make it appealing and affordable to a variety of customers.”

Recognizing the importance that their shoppers place on these items during the holidays, Price Chopper is also offering in-stock guarantees on several items through Jan. 1, 2008, such as 31-40 count cooked shrimp and 12-ounce shrimp rings.

“It's definitely a question of perception,” Golub explained. “In much the same way that we were one of the first supermarkets in the nation to go 24/7, we wanted our shoppers to know that whenever they needed us, we were there for them. The holiday in-stock guarantee is our way of assuring customers that we will have the items that they are looking for at this time of year.”

“For us, we'll have up to 12 or more different types of shrimp,” he said. “Prawns, shrimp, scampi, all of those things. One of the things that we're seeing as a great item now are a 6-8 count raw scampi.”

Yet while those products certainly shouldn't be treated as loss leaders — like holiday frozen turkeys and roasts — he noted that discounts were still important, both to assure shoppers that his prices were in line with local competitors, and to showcase the options that Lamb's has in its seafood departments with the chain's weekly ads.

He continued: “Obviously, you can't be priced completely out of line with your competition. You've got to be in the ballpark, but you don't have to get those products to the point where they're a loss leader or you just aren't making any margin. A lot of times, it's good to have price reductions on a few items just to remind customers that you have them. It's more for the purpose of highlighting those products in your ad, rather than just bringing them in on price.”

Price is certainly a barrier to trial and sales in both shrimp and the seafood category in general, but Lutz noted that part of that price resistance is led by shoppers' lack of familiarity with these products.

“There's a fear of spoilage, a fear of waste,” Lutz said. “If you throw it away, any product is expensive. So, the lack of knowledge, and the lack of preparation ideas are significant impediments to shoppers purchasing seafood more often.”

As a result, holidays present a major opportunity for retailers to emphasize the service aspect of their seafood counters, cultivate relationships with those special-occasion buyers and highlight any recipe ideas and educational materials that their stores offer.

Price Chopper, for example, has developed “'Tis the Season to Think Shrimp,” a special brochure that will be available throughout December. It includes recipes ranging from shrimp scampi and shrimp salads to special holiday shrimp spreads, and gives shoppers basic tips on purchasing shrimp and gauging shrimp count per pound, as well as peeling, de-veining and cooking the product. Stanchion signs in Price Chopper seafood departments will alert shoppers to the brochure's availability, and Golub said that store circulars will possibly include a special burst in the seafood portion of the ad.

The brochure is an extension of Price Chopper's broader “Be Seafood Smart,” line of educational brochures, which continue to be popular with the company's shoppers, Golub said.

“Shoppers are purchasing more seafood because programs like Be Seafood Smart, as well as the knowledge of our seafood associates, give them the information that they need to feel comfortable in purchasing, storing and preparing seafood,” she said.

“It increases loyalty to Price Chopper as a store and also to our seafood departments. We really make great effort to connect consumers to the information. People who work in those departments — who are on the front lines of our seafood departments, who understand the product and can communicate personably to our shoppers — make the difference for us. And, we work hard to ensure that they have the product knowledge they need, so that they can take pride in sharing valuable information with consumers.”

Staffenson noted that, when training service department associates, Lamb's department managers emphasize that shoppers simply don't have access to items behind the glass, making sales and outreach a critical aspect of those associates' roles.

“How does a customer get product out of that case? They can't,” he said. “The customer can't buy product out of a service case without us. The typical thing that happens is that the customer walks up to the counter, and [an associate] says, ‘Can I help you’ or ‘What can I get for you?’ For customers, the first response is usually ‘No’ or ‘I'm just looking.’ You've got to engage that customer and make them feel comfortable with you as an employee and comfortable with what they're buying.”

Lamb's offers recipes for most of the items in their seafood counter, but Staffenson said that the key is to develop relationships between a department's staff and the store's shoppers. For example, he encourages staff to share their personal suggestions for preparing different products.

“This is a department that you can focus on and make it a point of difference with your competition,” Staffenson said. Noting that volume and sales for the category have tripled at Lamb's during the past decade, he added, “It's definitely an expanding category, and when you can be known for having a good selection and known for having good people, it's a point of difference.”