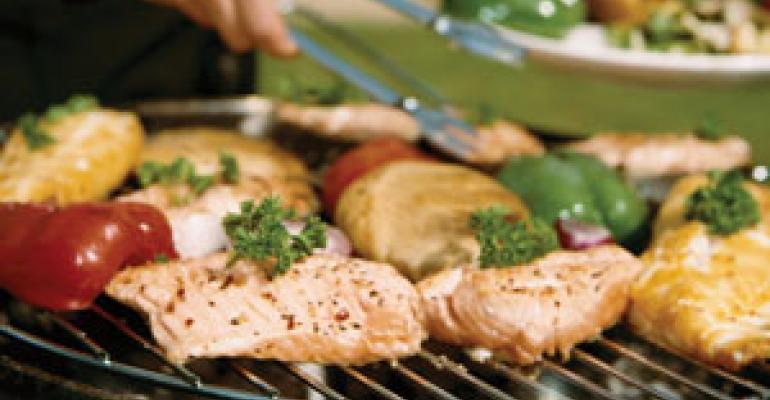 School's in for shoppers scared to buy seafood. With all the recent news coverage about the health benefits of seafood, many shoppers have been working to incorporate more of it into their diets. What many still don't seem to realize, though, is how easy it can be to cook. Retailers are busy stepping up their efforts to promote seafood with recipe cards and, in some cases, in-store cooking services,

School's in for shoppers scared to buy seafood. With all the recent news coverage about the health benefits of seafood, many shoppers have been working to incorporate more of it into their diets. What many still don't seem to realize, though, is how easy it can be to cook. Retailers are busy stepping up their efforts to promote seafood with recipe cards and, in some cases, in-store cooking services, while suppliers have launched a variety of new products geared toward simplifying seafood preparation.

Some chains, like Price Chopper, Schenectady, N.Y., have found ways to overcome the most common purchasing barriers. According to Mona Golub, spokeswoman for the midsize retailer, Price Chopper has been selling more seafood in recent years, due in large part to its educational efforts.

“We've been providing a lot more information about the products we make available. We also offer recipe ideas, and our award-winning Be Seafood Smart Program promotes the nutritive benefits of fish and seafood,” she said. “Education is definitely important in this category.”

Golub added that consumers' amplified commitment to health and wellness has contributed to the increased interest in the category, too.

She also sees the opportunity to continue educating the public about the types of fish and seafood on the market and their benefits.

“Consumers have more awareness, but from that point forward, they need to learn which types of seafood to choose, and they need recipes and advice on how to prepare the food,” Golub told SN.

Price Chopper prides itself in introducing more unusual varieties, like pintado, which is one of the latest species added to the chain's offerings. Each time a new type of fish or seafood is introduced, store associates are encouraged to hand out recipe cards and offer cooking suggestions.

“It's important to be proactive,” said Golub. “We want to answer questions before our customers even have to ask.”

The sales jump at Price Chopper is indicative of the industry as a whole, said John Connelly, president of the National Fisheries Institute, Washington.

Consumption of seafood was up nearly 11% during the five-year period between 2001 and 2006, with an average of approximately 17 pounds of fish consumed by each person per year, according to the trade association.

Connelly agrees that much of the lift can be attributed to retailer efforts to educate shoppers and to the greater understanding of dietary advantages.

“Consumers do understand the health benefits of seafood, so the challenge that remains is mostly an issue of perception,” he said. “As an industry, it's crucial that we help them work through how to select and cook fish.”

Retailers can also promote the convenience factor of fish, which, compared to other proteins, takes a lot less time to prepare — sometimes five minutes or less, he noted.

“Canned tuna has been a staple of the American diet for years, but now, even opening a can and adding mayonnaise and celery to make tuna salad is an inconvenience,” said Connelly. “Companies have gotten innovative with tuna and other seafood, packaging them in pouches or kits.”

Along with promoting the latest products and ratcheting up educational efforts, some retailers will even cook certain seafood items on request.

St. Louis-based Schnuck Markets does this. So does Safeway, Pleasanton, Calif.

“I was at a Safeway here in D.C. and the woman in front of me at the checkout said she had the store steam crab legs for her,” said Connelly. “Other chains are doing innovative things too, like H-E-B, which has 40- to 50-foot seafood counters and offers items that appeal specifically to the Asian and Latin markets in Texas.”

Big Y Foods, Springfield, Mass., offers to steam shellfish for its customers and will season any fish or seafood item free of charge. Shoppers can choose from Cajun, lemon pepper and teriyaki seasoning blends.

“The newer grill pans on the market are much easier to use than the old grill baskets that were curved and didn't lie flat,” said Jim Wisner, president, Wisner Marketing Group, Libertyville, Ill. “Consumers feel more comfortable cooking things like fish and seafood when they have the right equipment.”

Aversion to odor is a common complaint voiced by shoppers at Orchard Market, a two-store retailer based in Spring Lake, Mich. Grant Berry, meat and seafood manager at Orchard Market's Fruitport, Mich., location, responds to such concerns by suggesting that shoppers try grilling whenever possible.

This not only prevents the fishy smell from permeating their homes, but also cuts the fishy flavor slightly, as many of the oils drip off instead of seeping back into the fish during baking, Berry told SN.

“Swordfish, yellowfin tuna and salmon are great items for the grill, but surprisingly, not everyone thinks of grilling seafood and fish,” he said. “We also have a very extensive recipe kiosk right by our meat and seafood counters, which is a nice resource for shoppers. If someone asks me a question about how to cook seafood, I can easily slip them a recipe card or offer suggestions on how to cook it.”

Orchard Market places a lot of emphasis on cross-merchandising seafood products. The retailer has displays of lemon juice, tartar sauce, deep-fry mix and cocktail sauce in the seafood department. There are even clip strips throughout the frozen aisles, coupling seafood boil kits and lemon pepper packets with frozen fish and seafood items.

Merchandising strategies aside, the best thing retailers can do to help educate consumers is talk to them, said Grant.

“We're a small enough store, so we're able to spend a lot of time talking to customers, helping them choose the right type of fish or seafood for their tastes and teaching them how to cook it,” he said. “Manufacturers are doing a good job lately, too. They're now putting recipes and cooking directions right on the packaging.”

McCormick & Co., Sparks, Md., has come up with several solutions for shoppers who need a little help with seafood preparation. This year, the spice manufacturer added microwavable steaming bags, Mediterranean, Santa Fe and Asian seafood sauces, and a new seafood rub to its product lines.

“Consumers are eating more seafood in recent years because they want to eat healthier, but there is definitely some uncertainty about how to cook it, and a lot of people don't like the aroma,” said Harrsen. “They also want convenience, which they get with all of these new products.”

McCormick and Old Bay steamable bags are particularly convenient, she added. Shoppers simply place seafood or fish inside the bag, add the seasoning and microwave for several minutes — three to four minutes for shrimp and around six minutes for other varieties.

“Everything is done inside the closed bag, so the smell doesn't permeate throughout the house, and there are no pans to clean, because everything is thrown away,” said Harrsen, adding that the new bags offer a quick, easy way to cook a healthy protein.

“Retailers should place more emphasis on ready-to-cook or heat-and-eat items, which would likely benefit seafood just like they've helped the meat department,” he said.

Frozen foods, like those made by Gorton's, take the guesswork out of cooking.

The manufacturer has an entire line of frozen products that are pre-assembled, precooked and ready in no time. Items include breaded whitefish fillets, tilapia and popcorn shrimp as well as shrimp scampi, preseasoned and grilled salmon fillets and four varieties of shrimp bowls blended with pasta or rice.

“There is a movement in seafood toward value-added products that are individually portioned, premarinated and ready to cook in just a few minutes, similar to what has happened with poultry,” said Connelly.

As retailers continue to promote such items and help educate consumers about fish and seafood, the category stands to see sales increases well into the future, he added.