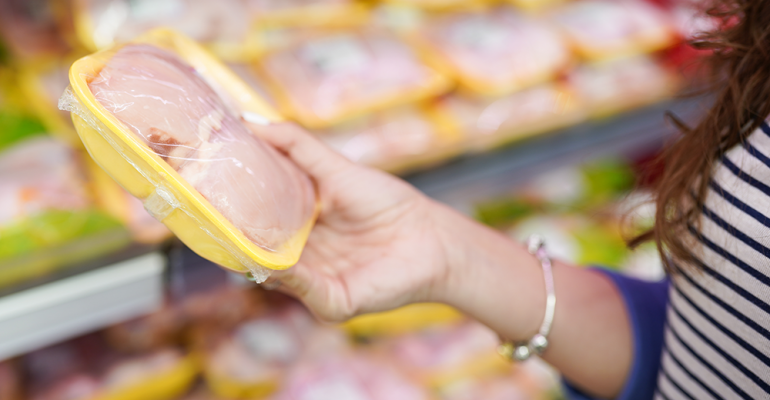 More than 90% of consumers surveyed purchased chicken at grocery store in past six months.

The National Chicken Council (NCC) presented the results of a study it commissioned that explored the drivers for grocery purchases of chicken compared to other meat and plant-based proteins. IRI conducted the study among 780 adults online July 1-10, 2019. IRI provided supporting data from its retail databases

The results showed that buyers of chicken chose it for seven of eight of these attributes.

All meat buyers are driven by taste, yet taste is a less important driver for plant-based protein consumers. Fish, on the other hand, is purchased for health and convenience reasons.

Less than 2% of chicken consumers said they intend to consume less chicken in the next six months, the study revealed. While future consumption intentions are steady for the traditional meat proteins, there is more positive consumption intent for both fish and plant-based protein, with 23% of fish and 44% of plant-based consumers planning to consume more of those proteins in the next six months.

Chicken Marketing Summit attendees were encouraged to “deliver on higher emotional attributes” to increase chicken consumption among those already buying chicken. The research also provided insight that the attributes "humanely raised," "sustainable" and "satisfying" were more highly correlated to increased consumption than more practical attributes of "better value," "taste" and being "easy to store."

When it comes to plant-based meat, Chris DuBois, senior vice president and principal at IRI, said data show that grocery trips where meat substitutes are purchased are four times more likely to include meat, so “It’s meat and these products, not or.”

Only about 16% of total buyers of protein purchase plant-based meat/meat blend alternatives, yet the majority (67%) of those who haven’t purchased these types of protein alternatives are aware of such products.

Of total meat buyers, 44% are open to giving plant-based meat/meat blends a chance, and 14% said they will purchase such products in the next six months.

However, while major retail opportunities in meat and poultry remain, they are not for the usual products or for the usual players, according to a new report by market research firm Packaged Facts.

The report explained that leading players have done much to innovate in meat and poultry, launching new or acquiring products that offer premium farm-to-table experiences with authentic stories, organic ingredients or grass-fed, free-range and locally raised animals. This will continue, but Packaged Facts said meat substitutes and meat alternatives have garnered much of the recent attention in the market, causing major producers to rethink their protein opportunities and take action.

In fact, the report estimates retail sales of meat substitutes at about $1 billion, with sales traditionally driven by vegans and vegetarians. An increasing number of consumers are embracing plant-based foods, expanding the market from the popular turkey and veggie burgers to meat-like burgers that “bleed” and offer taste and texture characteristics similar to meat.

Further, the report suggests that lab-grown or cultured meat is likely to be the next major market disruptor. In fact, the concept has attracted a lot of attention recently, with Tyson Foods and Cargill, as well as Bill Gates and Richard Branson, investing in start-up Memphis Meats.

Still, the consumption of chicken in the U.S. has grown more than 300% since 1960, outperforming all other major proteins. At 94 lb. per capita, NCC noted that chicken consumption is nearly twice that of beef and pork. Chicken outpaced pork in 1984 and surpassed beef as America’s favorite meat in 1991.