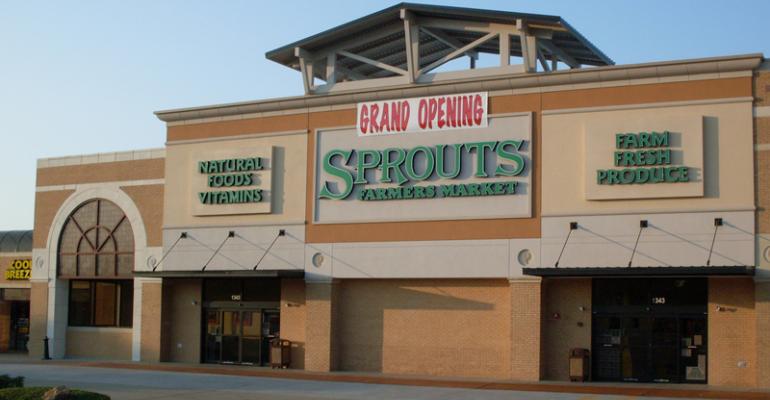 PHOENIX — Sprouts Farmers Markets has become the latest food retailer to file for a public stock offering, seeking to fuel ambitious growth plans while the appetite for IPOs is hot.

The retailer is touting rapid sales growth and the potential to add more than 1,000 new stores in a prospectus to raise around $300 million through the sale of shares.

The offering, which Sprouts said it hopes to initiate “as soon as practicable,” would be fifth supermarket IPO in the last two and half years, and follows similarly growth-minded specialty chains like The Fresh Market, Natural Grocers by Vitamin Cottage and Fairway Market.

Sprouts, which operated 157 stores as of May 1, said it plans to grow its store count by at least 12% annually over the next five years, with the potential to operate as many as 1,200 stores nationwide. The chain posted comparable sales growth of 9.7% in 2012, according to the filing, and has marked positive comps for 23 consecutive quarters. Sprouts in fiscal 2012 earned $20 million on sales of $2 billion.

Spouts, which is majority owned by the private investor Apollo Capital Management and by its founding Boney family, said it intended to use proceeds to service debt from its recent refinancing and for general corporate purposes. It did not indicate a price for shares. The company said Apollo would maintain a significant ownership stake after the IPO but did not specify the amount.

“The foundation of our value proposition is fresh, high-quality produce which we offer at prices we believe are significantly below those of conventional food retailers and even further below high-end natural and organic food retailers,” the company said. “We believe that by combining our scale in and self-distribution of produce, we ensure that our produce meets our high quality standards and can be delivered to customers at market leading prices. In addition, our scale, operating structure and deep industry relationships position us to consistently deliver ‘Healthy Living for Less.’ We believe we attract a broad customer base, including conventional supermarket customers, and appeal to a much wider demographic than other specialty retailers of natural and organic food.”

The filing comes at a time when the volume of IPOs — and investor interest in them — have rebounded strongly, financial sources say. This indicates growing confidence in the economy, evidenced by a strong stock market performance and low volatility. Companies from diverse sectors — including food retail — are also participating in a field that in more recently history was dominated by technology companies.

“The breadth of industries represented among [first quarter] offerings bodes well for the economy and the U.S. IPO market going forward,” Brian Eccelston, partner in the capital markets practice at BDO, New York, said in a recent report tracking such events in the first quarter. “The pace of U.S. IPO activity is likely to pick up significantly in the coming months as lingering skepticism of the economic recovery gives way to growing confidence among businesses and investors.”

Although the number of IPO filings was down in the first quarter, total proceeds were up by 29%, and the average deal was up 75% to $245 million, BDO said. The company noted the 30% drop in number of filings is somewhat misleading because the year-ago period was the last before the federal JOBS Act allowed emerging businesses to file with the Securities and Exchange Commission confidentially.

In forecasting continued growth in IPOs, BDO also cited the resolution of uncertainties around the presidential election and the fiscal cliff; a trend among private-equity forms to exit portfolio businesses; and impressive returns from IPOs attracting more companies to seek public

The first Sprouts store opened in Chandler, Ariz., in 2002, but company roots date back to 1943 when Henry Boney opened a California fruit stand. In 1969, two of Henry’s Boney’s sons, Stan and Steve, opened Boney’s Marketplace (later renamed Henry’s in honor of the patriarch).

Henry’s was acquired by natural rival Wild Oats Markets in 1999, but its stores were on the move again after Whole Foods bought Wild Oats, and subsequently sold the Henry’s stores to an affiliate of Smart & Final, which was controlled by Apollo.

Stan Boney and son Shon in the meantime founded Sprouts, which Apollo acquired and merged with its Henry’s holdings in 2011. This reunited the family with the chain they founded in 1969, and which since took on the Sprouts name. Sprouts and Apollo a year ago acquired Sunflower Farmers Market, converting those stores to the Sprouts banner as well.