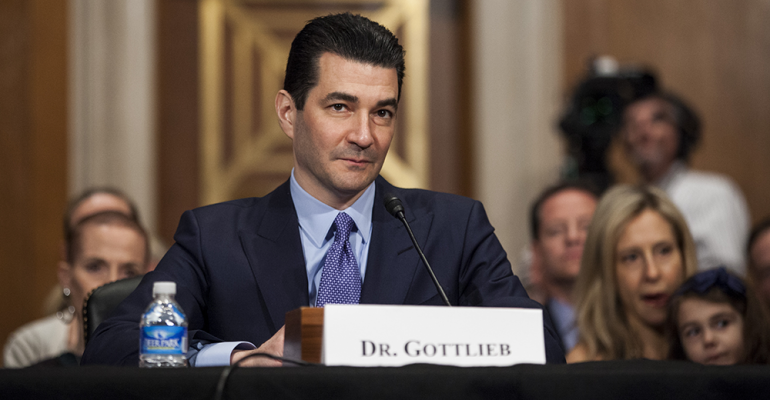 Near two-year tenure slated to end next month

After less than two years, Scott Gottlieb is stepping down as commissioner of the Food & Drug Administration.

The White House announced Gottlieb’s resignation Tuesday afternoon. Plans call for him to leave the FDA commissioner’s post in one month. No successor has been named.

“Scott Gottlieb, who has done an absolutely terrific job as commissioner of the FDA, plans to leave government service sometime next month,” President Donald Trump tweeted on Tuesday. “Scott has helped us to lower drug prices, get a record number of generic drugs approved and onto the market, and so many other things. He and his talents will be greatly missed!”

Published reports said Gottlieb was leaving the agency to spend more time with his family. He took the reins as FDA commissioner in May 2017, taking over from Robert Califf, a President Obama appointee who had stepped down from the post months before.

Related: FDA to identify retailers where recalled food was sold

“I’m immensely grateful for the opportunity to help lead this wonderful agency, for the support of my colleagues, for the public health goals we advanced together and the strong support of [U.S. Health and Human Services] Secretary Alex Azar and President Trump. This has been a wonderful journey, and parting is very hard,” Gottlieb said in a tweet on Tuesday.

A physician, medical policy expert and public health advocate, the 46-year-old Gottlieb had previously served as the FDA’s deputy commissioner for medical and scientific affairs and, before that, as a senior adviser to the FDA commissioner. He also worked on implementation of the Medicare drug benefit as a senior adviser to the administrator of the Centers for Medicare & Medicaid Services. In 2013, the Senate appointed Gottlieb to serve on the Federal Health Information Technology Policy Committee.

Trump made pharmaceuticals a focus area early in his administration, saying he aimed to slash soaring drug prices and unfurl regulatory snags to speed approvals of new medicines. As FDA commissioner, Gottlieb was charged with helping to cut red tape to get new drugs to market faster. One effort on that front came last month, when Gottlieb unveiled a new policy to help spur generic competition for complex, expensive branded medications.

Gottlieb also has led initiatives to bolster food safety — including improvements in the recall process and tracing sources of contamination — as well as to crack down on opioid addition and the use of tobacco and electronic cigarettes. News of his resignation came just a day after he announced actions to stem the sale of tobacco and e-cigarettes to youth by online and brick-and-mortar retailers, singling out such companies as Walgreens, Walmart, Kroger, Family Dollar, 7-Eleven, Casey’s General Stores and Circle K.

“All of us at HHS are proud of the remarkable work Commissioner Gottlieb has done at the FDA,” Azar said in a statement. “He has been an exemplary public health leader, aggressive advocate for American patients and passionate promoter of innovation.”