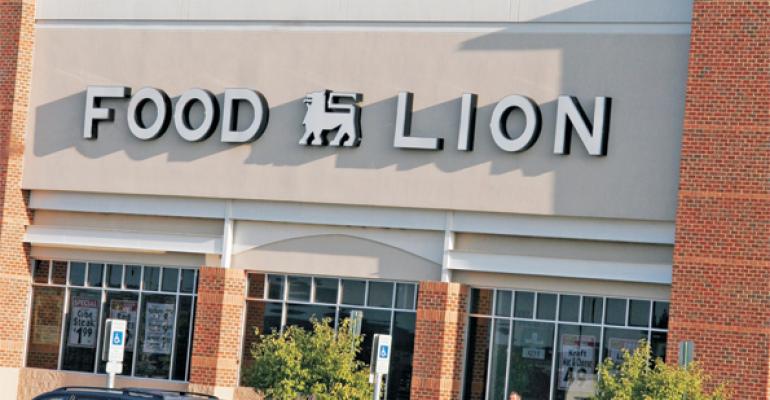 &ldquo;The biggest drag on our U.S. sales have been &hellip; those markets where we have not implemented our new strategy.&quot; &mdash; Ron Hodge, CEO of Delhaize America

BRUSSELS — Price and service investments at the Food Lion banner continued to pressure profits for Delhaize Group, but officials last week insisted the strategy was revitalizing the struggling franchise.

Ron Hodge, chief executive officer of Delhaize America, in a conference call last week said comparable-store sales at Food Lion stores that were repositioned in the first two phases of the Food Lion rebranding program have improved by more than 3%, and that the company expects the most recently completed group of relaunched stores would help the entire banner show positive sales within six months.

Food Lion stores yet to receive repositioning work — which the company calls “rebranding” — continue to struggle, he added.

The Food Lion repositioning is a program of price investments and service improvements intended to increase sales, improve mix and boost store traffic at Delhaize’s largest U.S. banner, which officials admit has lost sales and traffic as a result of drifting prices and mediocre fresh offerings and service.

The program is being introduced in phases, beginning with 166 stores in the Raleigh, N.C., and Chattanooga, Tenn., markets in May of 2011. Phase 2, covering 268 stores in the Virginia markets of Richmond, Roanoke and Lynchburg, was introduced in March. Stores in those phases showed comparable-store sales gains of 3.2% and 3.3%, respectively, during the second quarter, Hodge said.

But the biggest impact could come from 269 stores in the Greensboro, N.C., and Charlotte markets that were completed in mid-July. This third phase brings the chain to 62% complete.

“The biggest drag on our U.S. sales have been … those markets where we have not implemented our new strategy,” Hodge said. “And the biggest Food Lion group in that mix is our Charlotte-Greensboro group. It’s a very, very important area for Food Lion. I mean, it’s our hometown.”

Figures provided by Food Lion last week showed the 693 stores that had not yet undergone rebranding by the end of the second quarter saw sales volume decrease by 6.7% during the period, reflecting a 2.3% decline in transactions and a 4.5% dip in items per transaction. Sales for all of Delhaize’s U.S. stores — including the Hannaford Bros., Sweetbay and Bottom Dollar banners — decreased by 3.1% in the quarter to $4.7 billion. Excluding the 126 Food Lion stores that were closed in February, total U.S. sales were up 0.3%.

Asked by an analyst when he anticipated that Food Lion sales would show positive growth overall, Hodge said “around six months or within six months,” counting on a ramp-up in sales from the recently completed Charlotte and Greensboro markets. A fourth phase of the rebranding is planned for early next year.

Investments in this program brought considerable pressure on profits during the quarter — pressure officials said is likely to last at least through the end of the year. U.S. operating profits were down by 24.5% for the quarter and operating margin has decreased a full percent to 3.3% of sales.

Pierre-Olivier Beckers, CEO of Delhaize, said the investment in prices was a long-term strategy, and that Delhaize intended to recover margins through disciplined spending and leverage as a result of increased sales.

“Clearly, we want to drive our top line growth through competitive pricing, and this will support our EBIT margins over time, just as much as the new efficiency plan that we are working on and the other elements of our discipline … in terms of working capital and so forth, he said.”

Delhaize is also feeling effects of price investments at its Hannaford Bros. division, which is battling new competitors in two of its largest markets, Hodge said. In Albany, N.Y., two new ShopRites have opened. In Manchester, N.H., Hannaford is feeling the impact of two new Market Baskets.

“All four of these stores are very large, high-volume units,” Hodge said. “There is a significant sales impact when they come into these two marketplaces. I think we are dealing with it reasonably well. In fact, in Q2, our market share has actually increased across the Hannaford territory. I’d like to see the overall sales performing at a better level, but these things take a little bit of time and responding to price competitors in major marketplaces is a long-term event for us, and we’re focused on building our sales back in those markets.”

Officials said Bottom Dollar helped improve overall volume trends but that the discount division was still a money loser. Including operations in Europe and Asia, Delhaize posted sales of $7.1 billion (U.S.), an increase of 11.5%, while operating profits dipped 12% to $229.3 million (U.S.).