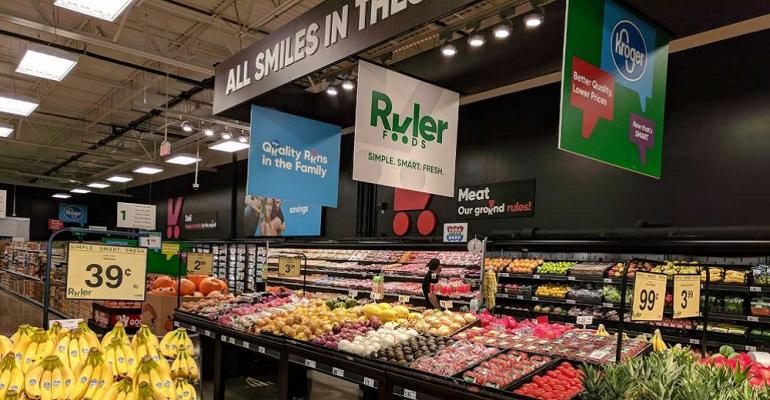 Kroger’s low-price banner Ruler Foods has unveiled a new look at two stores in Illinois, according to local reports.

The two new stores feature a large selection of Kroger’s private label items, including its Simple Truth organic and free-from line and its specialty Private Selection label. They have also improved pricing and selection in the produce offering and moved it to the front of the store, according to the Lexington, Ky., Herald-Leader. The layout is similar to the latest remodels from Aldi, which is in the midst of a nationwide revamp that is driving sales gains, according to reports. The new Ruler Foods stores, which also feature a new logo, could be a prototype for future locations, a spokesman for the banner told the newspaper.

A spokesperson for Kroger could not immediately be reached for comment.

Kroger earlier this year named Aldi veteran Liz Ferneding to be president of Ruler Foods, succeeding Paul Bowen, who retired in May.

Kroger operates about 50 locations of Ruler Foods locations in the Midwest. In other Kroger news, the company said this week that it has expanded its ClickList online shopping service to 1,000 locations and “launched the latest seamless and digital shopping experience” for the service. That includes providing faster and easier access to relevant products and recipes, digital coupons, weekly ads and shopping lists, the company said.

And last week Kroger said it has expanded its Prep + Pared meal kit offer to four new divisions — Central, Columbus, Fry's and Nashville —  joining the Cincinnati, Louisville and Ralphs divisions that already carried the meal kits in their stores.

Prep + Pared Meal Kits are now available in nearly 200 stores across the country, and will arrive early next year in several new divisions, the company said.

Study: Most U.S. consumers to stick with eating at home post-pandemic
May 13, 2021