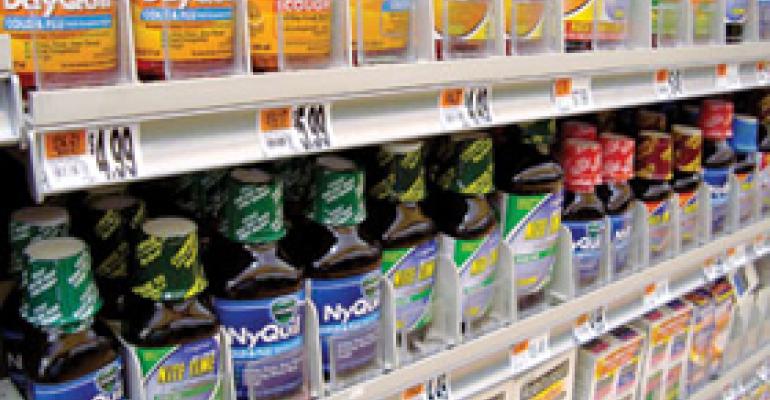 When struck with coughs, colds or the flu, shoppers are becoming more likely to seek advice from their supermarket pharmacist and turn to over-the-counter remedies for relief. The reasons are straightforward. In-store clinics have become more prevalent. And, the prolonged recession has caused many people to lose their health insurance, and led many others to avoid copays for doctor's visits and prescription

When struck with coughs, colds or the flu, shoppers are becoming more likely to seek advice from their supermarket pharmacist and turn to over-the-counter remedies for relief.

The reasons are straightforward. In-store clinics have become more prevalent. And, the prolonged recession has caused many people to lose their health insurance, and led many others to avoid copays for doctor's visits and prescription drugs for less serious illnesses.

“The recession has also aided sales [of OTC medicines] because more consumers are on a budget and may turn to OTC remedies for their symptoms instead of opting for costly doctor visits or insurance copayments. And, because consumers are hyper-conscious of missing work and consequently earning smaller paychecks, they turn to OTC remedies to help them get through their workdays,” notes a May report on the state of the Cough and Throat Remedies market from Mintel International.

As a result, more people are asking for help from their pharmacist. In a recent survey of more than 500 U.S. pharmacists sponsored by Matrixx Initiatives, 85% said the economy was responsible for increasing the number of patient inquiries about OTC remedies, and 81% said that more patients appear to be choosing OTC medications instead of prescription drugs due to the recession. Eighty-one percent also said that they are making five or more recommendations per day for OTC cold and flu medicines, and 87% said they expect to see an overall increase in the number of patients seeking this type of advice as the recession continues.

“Pharmacists are the most accessible health care provider for patients with cold and flu symptoms, and the survey findings emphasize the important role of the pharmacist in educating patients with information about early treatment to shorten the duration and severity of a cold,” Dr. Fred Eckel, professor of pharmacy practice and experiential education at the University of North Carolina-Chapel Hill, noted in a release announcing the survey results.

But, those same economic pressures seem to be affecting shoppers' ultimate product selection as well. Many national OTC brands haven't netted any growth from this trend. In fact, sales of several major brands declined during the past year. Private-label products, on the other hand, have been on a tear.

Allegan, Mich.-based Perrigo, the world's largest producer of private-label OTC pharmaceuticals, offers one example. In the second fiscal quarter of 2010, the company's consumer health care division posted record sales of $478 million. Growth was credited to increased store-brand penetration and strong sales in the cough, cold and flu category, where sales were up 19% compared with the same period a year ago.

“The overall OTC consumer market was up 1.5% vs. last year, with national brands down 2%, but with store brands gaining more than 12% on the strength of new product launches and the shift in retailer and consumer preference for store brands in each major category,” Joseph Papa, chairman and chief executive officer of Perrigo, said in a February analysts call.

“If you do the math for the 52 weeks ended June 2009, store-brand penetration increased approximately three points — from 25% to 28%,” he continued. “If you do the same math for the 52 weeks ending January 2010, store brands are still gaining share at nearly 3 percentage points a year. Although the trend has decelerated slightly, we expect this trend of increasing store-brand penetration to continue throughout calendar year 2010.”

The trend is reflected in recent data from SymphonyIRI. During the 52 weeks ending June 13, 2010, supermarket channel sales of private-label cold, allergy and sinus liquids and powders increased 9.5%, to $46.7 million. Sales of popular brands such as NyQuil, Robitussin CF, Triaminic and Claritin were flat, while dollar sales of DayQuil and Zyrtec cold and flu medicines dropped more than 10%. Sales of Children's Tylenol cold and flu also fell almost 15%, although McNeil Consumer Healthcare's recall of a range of Tylenol products probably contributed to that decline. By comparison, sales of Tylenol Cold for adults grew 7.4% during the same period.

Several other national brands beat the trend as well. Theraflu and Zicam both posted sales gains of 11.2% and 14.8%, respectively. Sales of Dimetapp Cold & Cough grew 131%, and sales of Children's NyQuil grew 118% off of a relatively small base in the supermarket channel, as parents sought alternatives to recalled Children's Tylenol products.

Similarly, sales of private-label cold tablets and packets were up more than 13%, reaching $163 million in the supermarket channel. Supermarket channel sales were flat or down for all other major producers of OTC tablet and packet brands during this period, with the exception of Theraflu producer Novartis, and Zicam producer Matrixx Initiatives, which saw growth of 6.2% and 12.2%, respectively.

These trends are likely to continue, according to projections from Mintel. OTC medicine sales can fluctuate significantly, based on the severity and duration of cold and flu seasons each year, but several other, more predictable factors point to future growth for the total category.

“Certain parts of the population are more susceptible to colds and flu, and their population growth also factors significantly into sales of cough and throat remedies,” the Mintel report notes, pointing out that the population of U.S. citizens aged 65 to 74 will increase more than 25% between 2010 and 2015. And, the number of children under 6 is expected to grow by 4.6%.

In addition, the U.S. Hispanic population is expected to increase by 16% between 2010 and 2015, “yet Hispanics are also the most likely to be uninsured, which likely means that a number of Hispanic [cold and flu] sufferers will buy OTC treatments for their ailments in years to come.”

Based on these and other factors, Mintel expects little growth for the category this year — again due to shoppers swapping national brands for private-label products — but forecasts steady, 2.3% to 2.6% dollar sales gains for the total category each year during the next four years.

And, private-label OTC remedies will probably continue to encroach on the market share of their nationally branded rivals, even as national brands continue to innovate in an attempt to stave off the growing competition.

“The percentage of private-label decongestive, cough, cold and flu relief launches relative to branded launches has actually decreased [between 2004 and 2009]. This further attests to the power of private label during tough economic times: Even though national-brand launches outnumber private-label launches, consumers are still turning to this type of product at an increasing rate,” according to the report.

Many retailers have responded by stocking a wider range of these products, and one likely response from suppliers will be an increase in OTC remedies that incorporate vitamins and other ingredients.