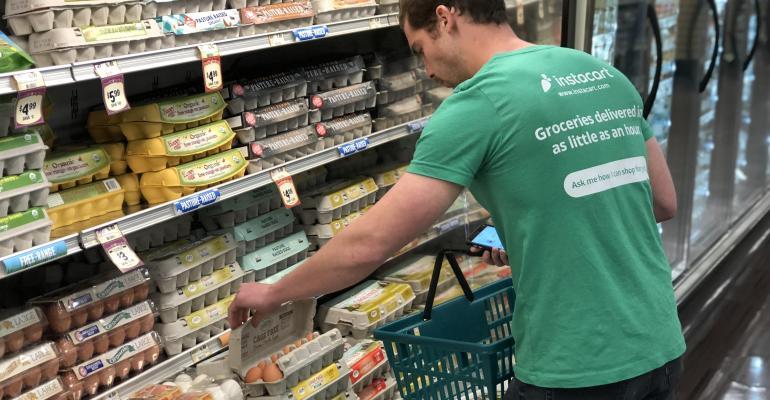 Sprouts Farmers Market
Instacart is guaranteeing its personal shoppers a tip of up to $10 if customers zero-out the tip they gave after receiving their delivery, a practice known as 'tip baiting.'
News>Online Retail

Instacart has taken action to safeguard its personal shoppers from customers who do the tip bait-and-switch.

San Francisco-based Instacart said Tuesday that it has launched “first-of-its-kind” tip protection on its digital platform for shoppers that will boost their income from tips and bring more reliability to their earnings. The online grocery giant fields more than 600,000 personal shoppers, who pick, pack and deliver orders.

The tip protection feature is designed to prevent Instacart shoppers from being victimized by customers who remove a tip after an order is delivered without specifying a reason, a practice known as “tip baiting.” Going forward, if a customer zeroes out the tip they gave following delivery without reporting an order issue, Instacart will cover the amount of the initial tip up to $10. The company noted that, although tip zero-outs post-delivery are “exceedingly rare,” it wants to ensure its shoppers don’t lose out if they do happen. 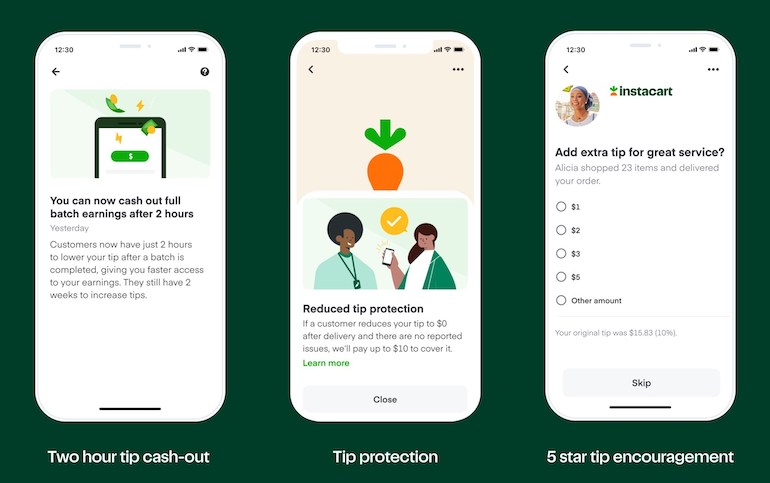 Instacart also is enabling its shoppers to access their tip earnings sooner and prompting customers selecting no tip to give one and those providing a tip to raise it.

Instacart said it also has invested in ways to access their tip earnings more quickly and encourage higher tips from customers. Now, shoppers can cash out their tips two hours after they deliver an order, down from the current 24-hour window. In addition, customers who give shoppers five-star ratings will be prompted to consider raising their tip after checkout, while those who select no tip will be encouraged to add one to recognize their shopper’s hard work.

Both tip-prompting features have proved effective as they’ve been rolled out over the past few months, according to Instacart. Shopper earnings on tips from eligible orders have risen 6% on average over that time span, and the number of customers electing not to give a tip has declined 12% on average, the company said.

“We strive to equip shoppers with information on the best way to earn, so they can earn what they need, when they need it,” John Adams, vice president of shopper and fulfillment product at Instacart, said in a statement. “It’s our job to give shoppers the ingredients to earn on their terms so they can understand when, where and how to maximize their earning potential on our platform.”

In markets across North America, Instacart also is piloting several new batch types to unlock additional earnings opportunities for its personal shoppers, including multi-store batches and in-store add-on orders. Multi-store batches enable shoppers to pick products from more than one store location in one batch, maximizing the amount of time they can spend earning. Shoppers, too, can accept an add-on order while they are in the grocery store, adding another customer order to the batch they are already processing.

“With today’s improvements to tipping and batching on the platform, we’re making shopping with Instacart an even more reliable, profitable experience for the more than 600,000 individuals who choose to earn with us,” Adams added.

Overall, Instacart partners with more than 750 national, regional and local retailers and provides online shopping, delivery and pickup from more than 70,000 stores in over 5,500 cities. Its services reach more than 85% of U.S. households and 90% of Canadian households.