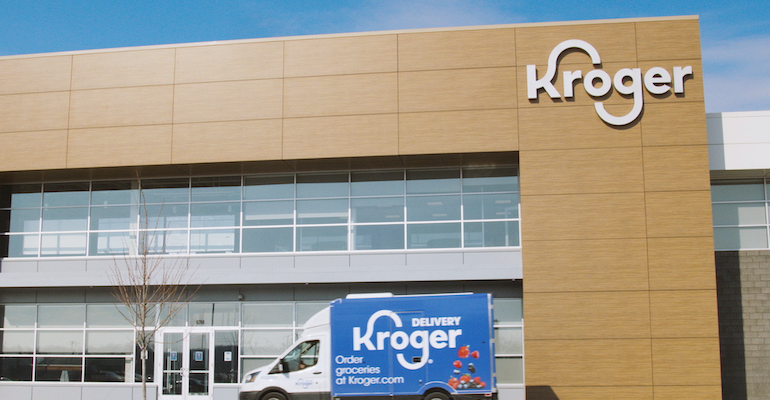 The Kroger Co.
The Dallas CFC, which had a soft launch this spring, provides Kroger Delivery to the Dallas-Fort Worth area — as well as Oklahoma via a spoke site — while the facility in Romulus, Mich., serves Michigan, northern Ohio and Indiana.
News>Online Retail

Kroger automated e-grocery warehouses get under way in Dallas, Detroit

The Kroger Co. has officially launched a new Ocado Group-powered customer fulfillment center in Dallas and gone live with another in the Detroit area under its four-year-old partnership with the United Kingdom-based online grocery specialist.

Kroger said Thursday that the 350,000 square-foot robotic warehouse in Dallas, announced in September 2019, will bring 500 jobs to the Dallas-Fort Worth metropolitan market and receive support from automated “spoke” facilities in Austin and San Antonio, Texas, and in Oklahoma City. Each spoke will serve as a last-mile cross-docking site that will extend Kroger Delivery to more areas, with the Oklahoma City facility enabling Kroger to serve a 36th state, Oklahoma, where it currently lacks brick-and-mortar stores.

In announcing the grand opening of the Dallas location, Kroger also reported that a CFC in Romulus, Mich., is now operational. The 135,000-square-foot facility, announced in September 2020, supports customers in several market areas, including in Michigan, northern Ohio and Indiana.

The CFC in Dallas began making its first deliveries in a soft launch this spring, according to Kroger. So far, the Cincinnati-based supermarket giant has announced 17 Ocado-driven CFCs, with six now under way. Besides the Dallas and Detroit sites, they include a CFC in Monroe, Ohio — Kroger's first Ocado facility — that went live in April 2021; 375,000-square-foot CFCs that opened in Groveland, Fla., in June 2021 and in Forest Park, Ga., this past February; and a 340,000-square-foot CFC that went live in Pleasant Prairie, Wis., in June.

“Kroger’s fast-growing, seamless ecosystem takes the promise of zero compromise to the next level, with Kroger Delivery bringing the freshest food and quality ingredients to your own doorstep — when you want it, how you want it,” Bill Bennett, vice president and head of e-commerce at Kroger, said in a statement. “Customers can use Kroger.com or the Kroger app to check the weekly circular, select personalized digital coupons, search products by dietary preference and ultimately place their delivery order, saving time and money.”

In early March, Kroger said it plans to construct a 270,000-square-foot, “Cleveland region” CFC that will serve areas in northeastern Ohio and Pennsylvania, with the latter representing the grocer’s 37th state. And then last month, a nearly 300,000-square-foot CFC was announced for Aurora, Colo.

Other Ocado CFCs reported by Kroger, running to 375,000 square feet, include locations in Frederick, Md.; Phoenix; Charlotte, N.C.; the Pacific Northwest; and the Northeast, the latter representing another location where Kroger lacks stores, along with Pennsylvania and Florida (save for a Harris Teeter store in the Jacksonville area). The retailer also has announced plans for two CFCs in Southern California and two more in Florida.

“Kroger and Ocado Group are building something truly unique in the American grocery landscape,” according to Luke Jensen, CEO of Ocado Solutions, which has its U.S. headquarters in Tyson, Va.. “Our expanding fulfilment network is reaching more and more customers, bringing the benefits of our cutting-edge innovation to Kroger communities nationwide. Today’s event marks the start of a service in Dallas that will bring a whole new standard of grocery experience to homes across Texas and beyond.”

Ocado and Kroger unveiled their partnership in May 2018. At the time, the companies said they planned to open 20 CFCs in the United States over the following three years. The Ocado CFCs and supporting facilities use vertical integration, machine learning and robotics to service online grocery orders and stand to extend Kroger’s reach to a larger geographic footprint, including areas where it doesn’t operate physical stores.