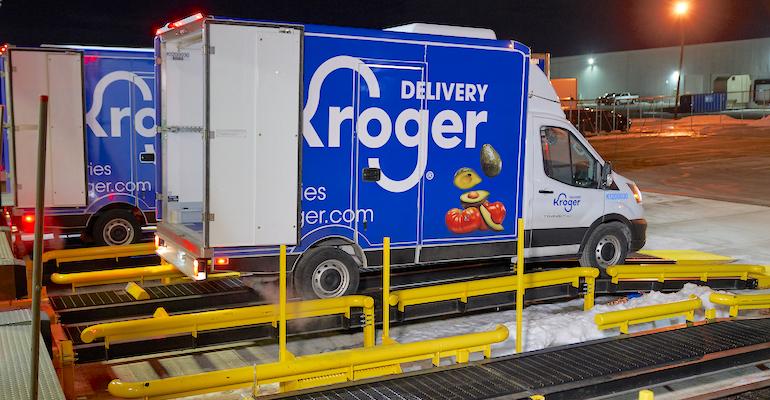 Kroger
Currently, Kroger has three Ocado automated spoke sites in operation, including in Indianapolis (pictured above) and in Tampa and Jacksonville, Fla.
News>Online Retail

The Kroger Co. again is leveraging e-commerce to delve into new geographies without adding stores.

At its 2022 Business Update investor event on Friday in Orlando, Fla., Kroger unveiled plans to build three more Ocado-automated “spoke” e-commerce fulfillment facilities to help process online orders. The new spoke sites — in Austin and San Antonio, Texas, and Birmingham, Ala. — are expected to go into operation later this year and support much bigger Ocado customer fulfillment centers (CFCs), including one that’s live in the Atlanta area and another planned for Dallas that's due to open this spring.

“Kroger’s digital investments are focused on driving expanded capacity, improving the customer experience, and developing new, innovative propositions via our strategic partnerships, including our Kroger Delivery fulfillment network powered by Ocado technologies,” Chief Information Officer and Chief Digital Officer Yael Cosset said in a statement. “Kroger’s growing seamless ecosystem continues to scale and allow us to reach customers who are not in the proximity of a store with delivery services, and we’re committed to doubling both our digital sales and profitability pass-through rate by the end of 2023. And our continued network expansion will help us reach this target.” 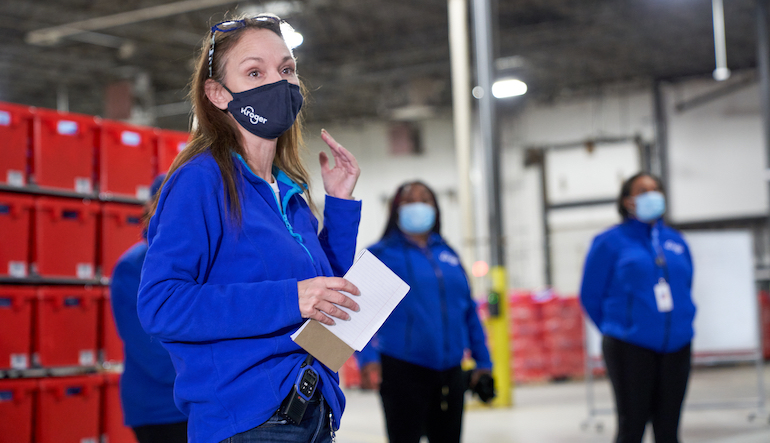 Each of the Austin, San Antonio and Birmingham spokes will create up to 161 jobs, according to Kroger.

Meanwhile, the 50,000-square-foot spoke slated for 30 West Oxmoor Rd. in Birmingham also will act as a cross-dock site and expand delivery service in supporting the 375,000-square-foot Ocado-powered CFC in Forest Park, Ga., opened in early February. That facility and the Austin and San Antonio spokes each will create up to 161 jobs.

The three new spoke sites will mark eight announced so far by Cincinnati-based Kroger. Three spokes are now live — in Indianapolis and in Tampa and Jacksonville, Fla. — and another two are planned for Louisville, Ky., and Oklahoma City. The latter spoke site, a 50,000-square-foot facility announced last month and due to launch later this year, will work with the Dallas CFC and bring Kroger into its 36th state, Oklahoma.

“I’m incredibly excited for the future of Kroger, and both thriving physical stores and digital solutions are part of it,” Kroger Chairman and CEO Rodney McMullen said in remarks at the Business Update event. “We continue to feel great about the momentum we’re experiencing with Kroger Delivery and our partnership with Ocado, supporting Kroger in strategically leveraging our unique assets to expand in existing regions — including Atlanta, Cincinnati and Dallas — as well as enter into new geographies like Austin, Birmingham, Cleveland, Oklahoma City, Orlando, San Antonio, South Florida and the Northeast through a flexible network of differently sized, high-tech facilities operated by friendly and knowledgeable associates.”

Overall, Kroger said it anticipates launching 17 new Ocado facilities, including spokes and CFCs, within the next 24 months.

Altogether, Kroger has announced 17 CFCs, with three now fully operational. Besides the Forest Park and Monroe facilities, a 375,000-square-foot CFC in Groveland, Fla., went live in June in a state where Kroger doesn’t have physical stores. Earlier this week, Kroger said it aims to construct a 270,000-square-foot, “Cleveland region” CFC that will serve areas in northeastern Ohio and Pennsylvania, with the latter representing the retailer’s 37th state.

Other Ocado CFCs reported by Kroger run from 135,000 to 375,000 square feet and include locations in Frederick, Md.; Phoenix; Pleasant Prairie, Wis.; and Romulus, Mich., as well as unspecified sites in North Carolina, the Pacific Northwest, West and Northeast, the latter representing another location where Kroger lacks stores. The retailer also has announced plans for two CFCs in Southern California and two more in Florida.

Kroger said Friday that it expects to open 17 new Ocado-driven facilities, including CFC hubs and spokes, within the next 24 months.

“We’re excited to continue extending the Kroger fulfillment network, with dedicated facilities of various sizes providing added scale, reliability of experience, and benefit of automation and wide customer reach, in both current operating regions as well as in new parts of the U.S.,” commented Gabriel Arreaga, senior vice president and chief supply chain officer at Kroger. “This network is enabling Kroger to create thousands of technology, operations, logistics and customer care jobs and improve access to fresh food in cities eager for the variety and value offered by Kroger that once could only be accessed through our stores.”

Kroger unveiled its partnership with United Kingdom-based Ocado Group in May 2018, at which time the companies said they planned 20 CFCs in the United States over the next three years. The Ocado CFCs and supporting facilities use vertical integration, machine learning and robotics to fill online grocery orders and are expected to expand Kroger’s reach to a larger geographic footprint, including in areas where it doesn’t operate brick-and-mortar stores.