Nearly half of shoppers are buying more groceries online due to COVID-19, Coresight Research finds

U.S. online grocery sales grew 22% in 2019 and, propelled by high demand from nationwide COVID-19 lockdowns, stand to surge about 40% this year, according to the Coresight Research U.S. Online Grocery Survey 2020.

Of 1,152 consumers polled, 52% had bought groceries online in the past 12 months — the first time that more than half of respondents had done so and representing more than double the number of shoppers from two years ago, Coresight said. E-commerce accounted for roughly 2.6% of U.S. food and beverage retail sales in 2019, but the projected growth in online grocery activity would raise that sales percentage to 3.5%, or nearly $38 billion.

Related: 'Rebound, Reboot, Reinvent': What retail and CPG companies can expect in a post-coronavirus world

Coresight noted that its survey was conducted March 17 and 18, when stockpiling of groceries and supplies was in full swing across the country as the spread of coronavirus escalated. As a result, online grocery sales could get an even bigger lift from the pandemic.

“The coronavirus outbreak has prompted shoppers to buy food and essentials online in greater numbers and more frequently. By the time of our survey in mid-March, the outbreak had already encouraged just under half of online grocery shoppers to buy more groceries online or driven them to start buying online,” Deborah Weinswig, found and CEO of New York-based Coresight, wrote in the study. “This year’s survey results saw a big increase in expectations to buy groceries online in the coming 12 months, and we suspect much of that is due to the impact of the coronavirus.”

Online Grocery Shoppers: Whether the coronavirus outbreak had impacted their online grocery shopping habits (% of Respondents)

Almost half of shoppers reported that they are buying more groceries online or have started making online purchases because of COVID-19, Coresight’s research showed. Of online purchasers, 34.9% said they’re buying more groceries because of coronavirus, and 14.4% said they started shopping online for groceries due to the pandemic. Another 10.5% indicated they’re buying groceries online less amid the outbreak, and 40.2% said the crisis hasn’t impacted their online grocery shopping.

“In the prior two years, expectations of buying online in the next 12 months exceeded the proportion of respondents that had bought online in the past 12 months by only a couple of percentage points or so. This year, we saw a major 10.5-percentage-point difference between ‘had bought’ and ‘expect to buy,’ with the latter jumping to 62.5%,” Weinswig explained. “The coronavirus outbreak likely fueled this jump in expectations.”

Online grocery customers, too, are buying a bigger selection of items and from more retailers. In the 2020 U.S. Online Grocery Survey, respondents purchased an average of five grocery categories online, compared with 4.4 last year.

“This not only implies greater cross-category shopping but also signals the market moving away from occasional one-off or specialty purchases to a greater focus on full-basket grocery shops,” Weinswig said.

In turn, more frequent online grocery shopping is leading people to shop at more retailers, as consumers reported making purchases from an average of 2.3 retailers online in the past 12 months, compared with 1.8 retailer last year. “It could indicate that the grocery e-commerce market remains partly up for grabs as shoppers continue to test the waters and have not yet settled on one online ‘favorite,’” she added.

Online Grocery Shoppers: Retailers from which they have bought groceries online in the past 12 months (% of respondents) 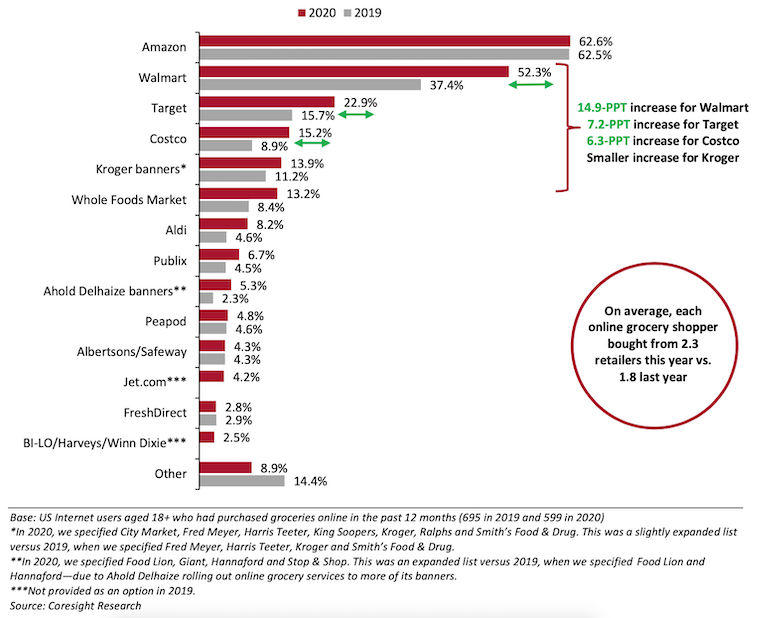 Among retailers, Amazon again led the field as an e-grocery shopping destination. In this year’s survey, 62.6% of consumers said they bought groceries online from Amazon in the past 12 months, compared with 52.3% for Walmart, 22.9% for Target, 15.2% for Costco Wholesale, 13.9% for The Kroger Co. (multiple store banners) and 13.2% for Whole Foods Market.

“Among respondents who bought groceries online, Amazon remains the most-shopped retailer,” Weinswig said in the study. “However, unlike all major rivals, the proportion of online grocery shoppers buying on Amazon.com remained flat year over year.”

Indeed, in the 2020 survey, Amazon saw just an 0.1 percentage point uptick in the share of shoppers buying groceries online at the retailer in the past 12 months. Meanwhile, three other retailers posted more than 5-percentage-point gains in share of online grocery purchasers: Walmart (+14.9), Target (+7.2) and Costco (+6.3). Also seeing notable increases were Whole Foods (+4.8), Aldi (+3.6) and Ahold Delhaize USA’s supermarket banners (+3.0).

“The ranking of the most popular retailers online broadly reflects their in-store ranking. Aldi is the exception: It sees disproportionately few online grocery shoppers, reflecting its relatively limited online offering that matches its no-frills approach,” according to Weinswig. “The ratio of in-store shoppers to online shoppers clusters around the four-to-one mark for the major multichannel retailers (with Aldi and Albertsons being exceptions). Walmart is an outperformer online, with a ratio of just 2.9 in-store shoppers for every one online shopper.”

For Amazon, the Prime customer benefits program has been a key sales driver in grocery. Coresight’s research found that two-thirds of shoppers with a Prime membership who bought groceries online in the past 12 months did so from Amazon, compared with a third of online grocery shoppers who aren’t Prime members.

“Amazon-owned Whole Foods Market also sees an approximate doubling rate of shopping among Prime members, suggesting that gains are trickling through to this subsidiary,” added Weinswig.

Despite sharp growth in e-grocery sales, a relatively small proportion of food shopping in the U.S. is done online, Coresight’s study pointed out. Yet that trend is changing. In this year’s survey, 63.1% of consumers did “almost none” or “a small amount” of their grocery shopping online, down from 72.4% in the 2019 poll. At the same time, 14% reported making “most” or “all or almost all” of their grocery purchases online, compared with 11.8% last year.