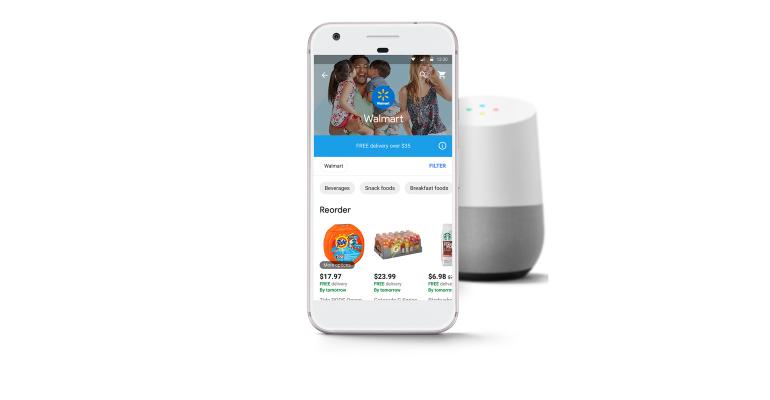 On the morning Whole Foods shareholders gathered to vote on its acquisition by Amazon, their respective counterparts announced a different agreement.

Wal-Mart Stores and Google on Wednesday said they had formed a partnership whereby shoppers could use Google’s apps and devices to shop at Walmart.

The companies said that beginning next month, existing Walmart customers can link their account to Google and receive personalized shopping results based on past purchases using the Google Express website or app, Google Assistant or Google Home device. The service will also allow customers to shop by voice for the first time. Walmart would fulfill the orders made through Google at no extra charge.

The companies said “hundreds of thousands” of items would be available to shop for through the service (Walmart.com currently offers more than 67 million SKUs for sale).

Google Express, which provides online commerce and delivery for a variety of retailers in a manner not unlike Instacart, also said Wednesday it was eliminating delivery charges on all orders that meet its partner retailer’s minimum order size.

The moves represent a further concentration of physical and digital retail in control of tech giants doing battle with Amazon. The latter company is expected to close on its acquisition of Whole Foods after Whole Foods shareholders voted to approve that $13.7 billion deal Wednesday.

“The move is an intelligent and natural joint venture for both Walmart and Google,” Gordon Haskett analyst Chuck Grom said in a research note.

“Next year, we will also leverage our 4,700 U.S. stores and our fulfillment network to create customer experiences that don’t currently exist within voice shopping anywhere else, including choosing to pick up an order in store [often for a discount] or using voice shopping to purchase fresh groceries across the country,” Lore said.

One of the primary-use cases for voice shopping will be the ability to build a basket of previously purchased everyday essentials. “That’s why we decided to deeply integrate our Easy Reorder feature into Google Express,” he said. “This will enable us to deliver highly personalized shopping recommendations based on customers’ previous purchases, including those made in Walmart stores and on Walmart.com.”