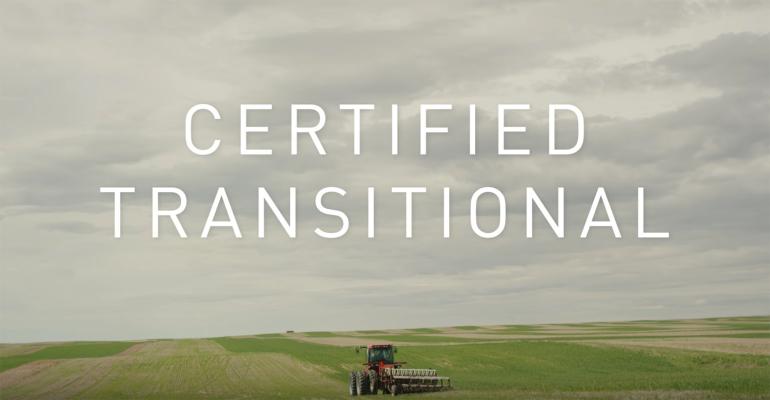 “Kashi knows from firsthand experience how it is still very challenging to source organic ingredients because less than 1% of farmland in the U.S. is organic,” said Nicole Nestojko, senior director of supply chain & sustainability for Kashi. “This is one of the things that inspired Kashi to pursue Certified Transitional — to increase the availability and accessibility of organics, as well as raise awareness of the barriers that farmers face when converting to organic.”

Producers who make the 36-month transition from conventional to organic crops are financially burdened as they invest in organic farming practices but are unable to benefit from organic prices for their crops. Grain producers are particularly challenged since wheat tends to be a lower-cost commodity than fruits or vegetables, and soft wheat is susceptible to disease, which is harder to combat while making the organic transition, noted Nestojko.

“Current commodity prices for conventional grains are so low that you can’t cash flow the added expense of the organic production requirements through the transition years,” Nate Lewis, farm policy director of the Organic Trade Association, told SN.

To help create a market for transitional crops, Kashi engaged QAI, a USDA-accredited organic certifying body, to lead the development of the first transitional certification requirements, which are now open to all.

Kashi worked with its supplier, HESCO/Dakota Organic Products, to identify farmers in Nebraska and Wyoming who could supply Certified Transitional grain for its Dark Cocoa Karma Shredded Wheat Biscuits.

“I transitioned some of my farmland to organic in the past and experienced the financial burden and uncertainty firsthand,” said Newton Russell, one of Kashi’s farmer partners, in a statement. “Certified Transitional changes the equation and makes the decision to go organic easier.”

Once a farmer secures a contract for certified transitional crops, it’s easier for them to get insurance and loans to invest in the process, explained Nestojko.

“This includes purchasing fertilizers allowed in organic farming, developing new farm business plans, and capital investments in special infrastructure such as on-farm storage,” she said. “Certified Transitional crops typically command prices that are higher than conventional crop prices as they are ‘organics-in-training,’ but lower than organic crops.”

“As this farmland completes its transition to Certified Organic, new farmland will be used to provide transitional wheat for future batches of Dark Cocoa Karma, which will remain a Certified Transitional product for as long as it is part of the Kashi portfolio,” Nestojko explained.

Dark Cocoa Karma has been well received by consumers, according to Nestojko, who reports that it’s the company’s best-performing cereal innovation in over five years. The brand will launch a new Certified Transitional campaign next month, and plans to add additional Certified Transitional products to its lineup.

Products that source “organics in training” will likely gain momentum thanks to a new partnership between the OTA and USDA that will create a National Certified Transition Program. The first round of approvals for certifying agent accreditations are expected to be complete on March 17, according to the OTA’s Lewis. Producers who are 12 months into the 36-month transition process will be eligible for certification.

“If it’s a 30-day crop they may [gain certification] later this spring, but if it’s corn or soybean it likely won’t be until they’re harvested in October/November,” Lewis explained.

A taskforce of OTA members determined that under the new program, “each individual certifier should have the ability to develop their own specific seal for transitional products, with the limitation that it not appear on the principal display panel, so it would be part of the information panel on the side,” said Lewis.

It’s unclear how significant the retail price premium on such products will be, said Lewis, who noted that it all depends on how the manufacturer plans to recoup the premium that it’s paid for supply.

“Are they going to pass it on to the consumer with a label of a transitional product or are they going to see it as an investment in securing future organic supply?” he asked.

Marketers who are focused on the former will face unique challenges in conveying to consumers — who may still be puzzled by certified organic products — what transitional certified means.

“It could be confusing to a consumer since ‘transitional’ is not something that rings with an intuitive sense,” said Jim Wisner, president of the Wisner Marketing Group.

To help raise awareness, Kashi created a YouTube video and sought support from prominent consumer influencer Robyn O’Brien, as well as the chairman and executive editor of GreenBiz, Joel Makower and the OTA.

“We also reached out to our peers within the food industry to encourage them to join in on the effort,” said Nestojko. “We know we can make a bigger impact by working together.