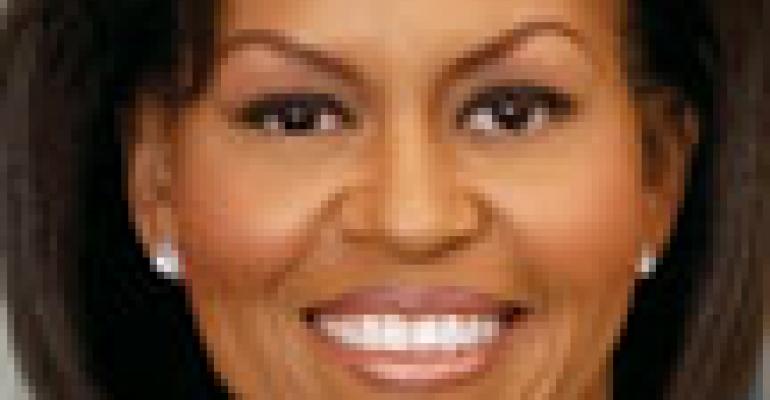 The First Lady is a mom first. And it’s the latter role that compelled Michelle Obama to adopt childhood obesity as her cause. The resulting programs — Let’s Move!, Let’s Move Cities and Towns, and Chefs Move to Schools — are just some of the concurrent efforts that have been rolled out this year, in quick succession.

“She was always interested in health and nutrition, mostly coming out of her own personal experience with her own family,” Jocelyn Frye, Mrs. Obama’s policy advisor, told SN.

As the centerpiece of the first lady’s efforts, Let’s Move! seeks to roll back the childhood obesity rate to 5% by 2030 — roughly where it was before the present epidemic.

Her inspiration comes, in part, from the current state of nutrition labeling, which she, herself, has admitted is difficult to decipher as she plans meals for her young daughters, Malia and Sasha.

“She went to Harvard and Princeton, yet she said that, despite having the best education academically, she was still trumped by food choices and understanding how best to feed her children,” said Eddie Gehman Kohan, a blogger who writes about food policy for her site, Obama Foodarama. “And she felt that experience was relatable with a lot of other people in the country.”

The White House Task Force on Childhood Obesity, formed as part of the larger health and nutrition campaign, found that one in three children (31.7%) ages 2-19 is overweight or obese. The direct medical costs accrued by overweight kids are estimated at $3 billion a year. The immediate goal was to promote healthful eating with flair.

“One of the first things she asked us to think about was how to engage, kids in particular but the public more broadly, in a conversation about healthy eating,” Frye recalled. “And she wanted to start with the garden.”

Michelle Obama made headlines soon after moving into the White House by starting a large garden on the White House grounds, and inviting children, food advocates and even chefs to help out.

“Every time she’s photographed in the garden, she’s dirty and her knees are covered with mud. She’s actually digging and planting,” noted Kohan. “That alone tells you that this is a first lady who’s different from others we’ve been used to. In some ways, she’s addressing this historic longing for a return to simpler times, when you could feed your family from a backyard garden.”

An action plan taken from the task force lists 70 recommendations, many of which are likely to be promoted in coming months. There is also activity on the legislative front, where Congress has taken up a number of bills aimed at healthy eating and children. And the food industry itself is being called upon to make nutritious foods more readily available. In May, a coalition of more than 80 retailers, manufacturers and trade associations pledged to reduce 1.5 trillion calories by the end of 2015.

“We think there’s a lot that food retailers and grocery stores can do, in terms of looking at placement of foods and highlighting healthy options, and making sure that people have access to the healthiest options possible,” Frye said.